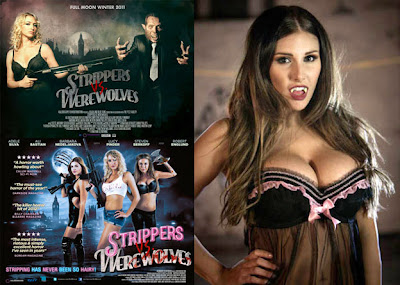 Warning: A few little spoilers might start
howling at you from in here somewhere.

I have to admit that, judging from the handful of comments I’ve seen bandied about the IMDB on this movie, I’m in somewhat of a minority in having a positive outlook on this lofty work. That is to say... I think I may be the only person who liked it. Oh, well... wouldn’t be the first time I guess.

Strippers VS Werewolves is a very low budget British “horror comedy” which, I suspect, didn’t really make it into a general release at UK cinemas. I use the term “horror comedy” loosely because, frankly, this movie isn’t really going so much for the horror element... it’s definitely going for the jugular in the humour stakes though and using high levels of gore and, um, werewolvery to drive the laughs and very simple story forward.

Starting off, briefly, with a flashback to a strip club in the eighties exploding, the movie starts off proper with a guest appearance by Steven Berkoff, playing a gangland boss, who, with the aid of his hired thugs, is indulging in the “interrogation” of a man tied to a chair. Werewolves come to take the whole gang out, including Berkoff, but when the grateful man in the chair is thanking his perceived rescuers and shouting out their “hero werewolves” stature... he is shown the error of his ways when said beasts eat him too.

Meanwhile, a stripper called Justice (played by someone called Adele Silva?) is giving a private dance in a room to a customer who is getting decidedly hot under the collar. Not just hot, in fact, but positively hairy and as he lunges after Justice, the young lady does what anyone in her position might do in the heat (and hair) of the moment, and stabs the punter through the eye with her pen, killing him. Of course, when the owner of the establishment and the security/bouncer from the place come to investigate, the dead “wolf in punters clothing” has already changed back to his human form.

Now the movie could have easily gone off in the direction of the stripper in question not being believed for the first third or so of the movie, but it doesn’t do that, refreshingly. The owner of the club, Jeanette, who is played by Sarah Douglas (or The Alluring Sarah Douglas as the caption on the old Superman The Movie bubblegum cards used to go), has had experiences of this type of thing before. She asks Justice if it was a silver pen with which she stabbed her howling customer and, when this is confirmed, Jeanette knows enough to suspect trouble... for it was her strip club which exploded in the 80s, when she trapped a large group of werewolves inside.

After some shenanigans as Justice and the bouncer try to discreetly dispose of the body of the dead wolfman, we get to know the rest of “the gals” and the story goes into romantic first date territory for a little while as Justice’s friend gets frisky with the bouncer, but then that subplot is violently curtailed as the pack of werewolves from the start of the movie eat the guy whilst trying to find the people who killed their friend/colleague/pack member. For some reason, these wolves seem to have no source of regular income and are happy just going around murdering people. This could have been “filled in” a bit better I think.

One of the werewolves is Justice’s boyfriend, unbeknownst to her. She is worried about telling the boyfriend, who she thinks is an estate agent, that she’s a stripper. However, when she accidentally bites him in her sleep, she is infected with his accursed wolf’s blood and so this is another potential problem for our canine antagonists. After a brief cameo by Robert Englund (and if you like it, there’s another brief cameo by him after the end credits) the stage is set with a battle royale between the werewolves and the strippers... and also Justice, the new were-stripper, so to speak.

So okay, this is not the best movie in the world but some of the humour is quite good and there’s some light but blatant references to other, famous “wolfed up” movies... such as the prison Robert Englund’s character is residing in being called Chaney prison after the 1941 incarnation of the Universal's The Wolfman. There’s plenty of quite gory violence if you’re into that kind of thing, but there’s definitely a lot less nudity or actual stripping in the movie than you would expect from a film with this kind of title. I’m not complaining myself, but I can see how some people’s expectations would have been built up by the “not quite doing what the packaging on the tin implies” status on this one.

The girls are all lovely characters (thank goodness we have another movie here not frightened to stand up to the negative portrayal of sex workers in mostly anything else... give people some respect and credit for their career choices please) and the chemistry between them is great. All the performances seem more than competent (and in some cases pretty good) to me. On the other hand, the werewolves are quite derogatory, misogynistic f***wits who any self respecting male (or female for that matter) would not want to spend any time hanging out with... but that’s what helps define their characters as the villains, I guess, so I can’t complain about this element really. The characters are, presumably, meant to be abrasive so you cheer when any of them get taken out.

There’s a brilliant character who spends his time on the periphery of the main story... well, on the phone most of the time actually, but also the periphery. The boyfriend of one of the strippers is also a Van Helsing monster hunter type, who speaks of incidents like The Vampires Of Dagenham and such like and who spends most of his time in the film trying not to be killed by two sexy, lady vampires while giving werewolf killing instructions over the phone. He’s pretty cool and has major involvement in the epilogue, which takes the survivors of this tale following on from all out Strippers VS Werewolves war, and gives them a new start on a different career path... let’s just say that the movie sets things up for a sequel which I would love to see but suspect will never get made.

Strippers VS Werewolves won’t be winning any awards for best horror movie of the year, I suspect, and nor is it a fan favourite (obviously, from the bad word of mouth I’ve seen). It doesn’t quite seem as professionally a polished product as other “British comedy horror” movies of recent years... such as Dog Soldiers or Shaun Of The Dead, but you can see there’s more than a spark of an idea and you can tell that the production team were really trying hard on this. And, as a result, I did find the movie quite watchable and entertaining, in a weird kind of Redemption Films prologue meets Troma kind of way... but I can see why it isn’t for everybody.

However, as a nice slice of the genre pie for people who are into low budget gore flicks with a warm heart and which doesn’t take itself too seriously, you can do a lot worse than sitting down of an evening with a warm shandy and a spin of this little movie in your DVD player. I’m glad I picked this one up and may even give it a second spin sometime in the next few years.