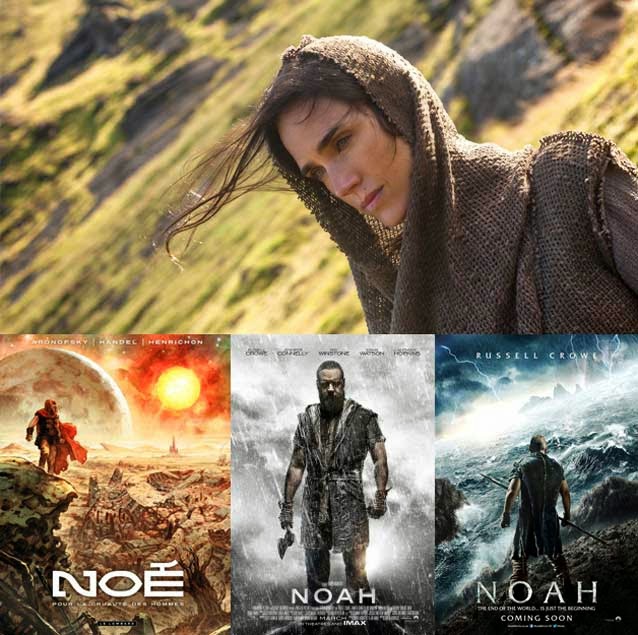 There Will Be Flood

Warning of sorts: If you don’t already know the basic story of Noah And The Ark then there may, indeed, possibly be some kind of spoilers in here. Probably not though.

I’m not exactly the most religious person in the world... to tell the truth.

Don’t get me wrong. I don’t deny the possibility of the existence of a God or some other kind of creator-like being or collective form of energy or whatever else one wants to believe in. And I would staunchly defend any man or woman’s right to believe in that kind of power and symbol of that power in their life. I just don’t know what to think or how to contemplate anything as alien as that which functions in a similar manner to that might be. If it either was or even is recognisable as a practical or spiritual reality is not something I can either judge as having a basis in our collective experience of life or not.

What I don’t personally believe in, however, is organised religion. It seems to me that this is just a tool used to control the masses through a sense of blind faith to a specific set of man made instructions or preferences to living. Without being any kind of expert on it, it seems to me the texts being used to progress these “clubs” or “societies” are questionable in the utmost and are as much about censorship and decisions made on our collective behalf for the good of those in power, as much as they are about anything they claim to be.

So although my initial reaction while I was watching Aronofsky’s version of Noah And The Ark was... “Hey, I don’t remember the bit in The Bible when the giant rock creatures help defend the ark against the evil humans while Noah gathered up his family.”... it has to be acknowledged that this is a much more forgivable form of artistic licence than, say, a James Bond film deviating 99% from the novel it was alleged to have been based on. At least I can be fairly certain that Ian Fleming wrote Moonraker, for example, and that the text he wrote is exactly what he imagined and, therefore, any liberties taken with it for the terrible movie adaptation of this were being committed in a much more culpable fashion than Noah which, obviously, was written by multiple authors, censored to the point that only a few of the author's versions are known to us and, ultimately, is questionable both in its intent and credibility.

Similarly, when Quentin Tarantino kills off Adolf Hitler by having him machine gunned to death in a cinema before that same cinema is blown to pieces in Inglourious Basterds, thus ending World War Two, I’m finding the admittedly brilliant denouement of this film far more questionable morally, in the context of education, than I do with Noah having giant rock creatures with angels inside them helping him build his ark.

Having got that out of the way, my experience as a paying member of the audience to Aronosfky’s movies is also something which is less than clear cut for me.

His first three feature length films... Pi, Requiem For A Dream and The Fountain... are all works of artistic genius, as far as I’m concerned. Not only are they completely brilliant, they are films which I could watch over and over again, every couple of years, without failing to be blown away by their incredible resonance and artistry. His fourth feature, The Wrestler, was also an incredible film but, for me, lacks that desire for repeat viewing which the films he made prior to that spoke to me with. It’s still a great film, mind you... just not one I’d want to revisit anytime soon.

But then came Black Swan (reviewed here)and he just lost me.

That movie had all the makings of another great work of art, with a wonderful concept. However, despite great performances by all the leads and a certainly competent standard of directing, it wasted its material. The intensity and ferocity with which the subject matter could have been shown just seemed heavily compromised and overly commercial, especially from someone with Aronofsky’s credentials. Without making too much of a meal out of it I’d have to sum it up, in the common vernacular of generations much younger than me, by saying it was... well... it was pretty “meh.”

Noah, if not a complete return to form by Aronofsky, and by that I possibly mean a return to the stylistic indulgences of my preferred earlier stage of his career, is an entertaining picture, if nothing else. It tells the story of Noah played quite credibly, perhaps even brilliantly, by an actor I have no special love of, Russel Crowe. His performance is by far the defining anchor of this movie and, as he is what the story is all about, that’s as it should be... although Anthony Hopkins as Methuselah does come close to stealing his thunder in a few scenes. Crowe is ably supported by performances from Emma Watson, Logan Leman, Douglas Booth, Ray Winstone (playing the ancient historical version of the local mafia gang leader, it seems to me) and the truly great actress Jennifer Connelly, who did such a brilliant, stand out performance for Aronofsky once before, in Requiem For A Dream.

The actors though, do tend to take second place to the brilliance of the sweeping landscapes and the special effects as used in such sequences as Noah’s apocalyptic visions of the future “death by water” and the aforementioned giant rock people. The rock giants are in the film for quite a lot of the running time and so are a constant fantasy element to something which many would regard as being based purely on a fantasy novel anyway. Or at least a source text which has been so tainted by years of history in a far more corrupt and virulent way than a series of Chinese whispers that any truths the original text or word of mouth, in actual fact, might have had to them are now absolutely impossible to fathom.

I can’t say I was blown away by Aronofsky’s take on the story of Noah, but I wasn’t bored by it either. The quick cut montages of his earlier work to impact certain ritualistic and repetitive actions are still not returned to here, although there are moments where montages of hundreds of cuts work in a different way, as a kind of clunky version of time lapse almost, indicating quite soundly that the creative roots of Aronofsky as an artist in control of his own vision, rather than just doing what a studio would tell him to do, is still very much present. It’s therefore not right for me to criticise this movie in any other way than by what I personally do or don’t like, therefore. Aronofsky is an artist on his own terms still... and that’s to be respected in the utmost.

The film is quite long but the pacing is quite leisurely and probably seems to be a lot faster than it actually is. I in no way felt the running time myself... if asked I would have said it was an hour and a half movie, not a two hours plus epic. That’s a good thing and shows that my attention was held during the narrative, although I think the epilogue of the years after the great flood was a little unnecessary to the text as a whole.

Is Noah a film I’d recommend? Well, possibly for Clint Mansell’s quite lovely score but probably not for those with a strong religious conviction, that’s for sure. At least, my expectations are such that an audience composed of a belief system based on the legacy of a specific set of ideas presented as fact would find this movie unpalatable in some ways. As a fantasy movie, it’s not the most exciting I’ve seen but, like I said, it held my attention  and I think most audiences without a specific skewed interest in adhering to a supposedly “set in stone” source text would be hard pressed to bear it any grudge and, possibly, get a morally uplifting message from it, by the end of the film. It’s not one I’m ever going to return to, I suspect, but it’s a pretty competent piece of cinema and I can only hope that Aronofsky will return to the style of direction and choice of subject matter that I so loved from him in the early part of his career. So not particularly hit or miss and, yeah, not even particularly “Meh” either. Just a nice solid film which you can either take or leave on its own terms and that’s the last I need to say about it.