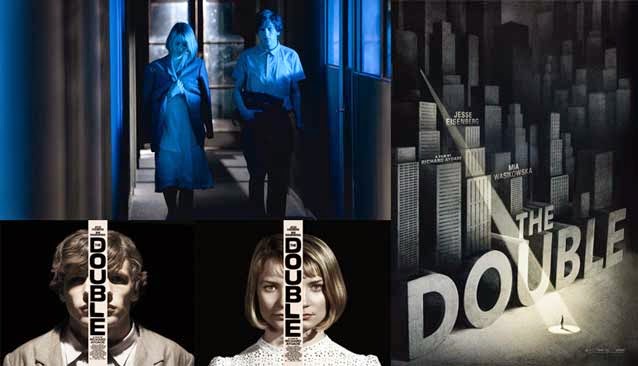 I know I’m probably going to come off as being really stupid when I say this but, for someone who hasn’t read the Fyodor Dostoevsky novel that inspired and informed this movie, The Double is quite frighteningly Kafkaesque.

Kafkaesque in the sense that it shows the little guy trapped in a world of corporate red tape and misunderstanding... a victim of the society that he lives in. To be fair, the original Dostoevsky novel apparently shares that common stance but, honestly, I invoke Kafka because it’s the only thing I personally have that I can compare to the experience of watching this quite brilliant, as it happens, movie version.

The film is vaguely surreal and, I have to admit, I was surprised when I found out the identity of the author of the original source. When I saw the trailer for this I was pretty sure that it was a modern reworking of Edgar Allan Poe’s  doppelgänger story William Wilson and, it turns out, that Poe’s own exploration of this theme predated Dostoevsky’s version by seven years. In fact, Thomas Mann compared the original 1846 novel unfavourably to Poe’s earlier endeavours on this proposition.

All of which means absolutely nothing here because, frankly, the movie is entertaining as hell.

It’s been promoted, perhaps lazily, as a comedy and, certainly, many of the cast play it as such. Jesse Eisenberg’s favourable take on the shlemiel type of character often found in early Woody Allen comedies is perfectly backed up by the often astonishing Mia Wasikowska and such inconceivable luminaries as Wallace Shawn, Noah Taylor and Paddy Considine. But for all of the laughs and moments of humour that this movie delivers by the bucketful... it’s also really, unbelievably depressing. Which I guess also fits with Dostoevsky’s modus operandi... unless Hal Hartley movies have been lying to me all these years.

It’s a movie which seems to have had very little publicity. I only first heard of it after I saw a trailer for it with Under The Skin a couple of weeks ago. Which is a shame really since, in addition to the wonderful performances which bring it to life, the film is a tour de force of brilliant set design, lighting, music (with some interesting needle-drop choices) and some really amazing sound design to it which brought to mind, nothing less than Alan Splet’s work on David Lynch’s Eraserhead. There are also some nice things going on in the editing which startled me at first, as the film will do things like cut between a mid shot of someone, then a long shot of something else, and then back to a close up of the original person which is kinda unsettling and jars you out of your comfort zone in certain places. Which is just excellent.

The film deals with a character who has his life invaded by a person who is an exact physical duplicate of himself and who is, for all intents and purposes, a much more extroverted and successful version. This double slowly and meticulously invades the main protagonist’s life by befriending him, then using him and ultimately usurping him and stealing the objects and goals of his desire until he becomes a bitter rival... this much you can get from just the trailer. It’s almost like he’s an evil version of Eisenberg’s character... like that episode of Star Trek, The Enemy Within, where Kirk gets split into two different versions of himself by the malfunctioning transporter. And it’s great that a film like this can be done now in a way that the illusion of having two Eisenbergs on screen is totally believable. I guess that we have David Cronenberg’s pioneering work on Dead Ringers to thank for that but it’s not the kind of movie where you’re always looking for the split in the screen like movies of yesteryear... although I’m aware that, to some of my younger readers at least, Cronenberg’s work on that movie probably does belong in the “yesteryear” category. But there’s definitely no seams showing here and, although the occasional “cheat shot” may be observed if your looking for it (the very first scene on a rickety, almost deserted train, for example... if I’m reading the meaning of that sequence correctly), the illusion is impressively maintained throughout the whole of the movie.

I mentioned earlier that the movie was somewhat Kafkaesque and there’s certainly a parallel with another great work of motion picture art that would share the same label, that of Terry Gilliam’s Brazil. This film is almost as detailed in the environmental design like that one was and also similarly surreal in places. It also pulls off a trick that is common to both the Gilliam movie, Tim Burton’s two Batman movies and a whole range of 1930s and 1940s Universal Horror movies in that it is deliberately, or so it seems to me, shot out of period. There are significant props and design decisions from past, present and future references found in various guises throughout the film’s running time which all blend together to make trying to place this in a specific time zone absolutely impossible. Which is kinda cool and puts you in a self contained fantasy world right from the outset.

The films is quite dark (and I’m not talking about the lighting here) but it’s never dull and I found myself absolutely engrossed in the narrative twists and turns waiting to be discovered in this one. I think there’s a lot on offer here to entertain the visually jaded modern film-goer and I even think I’ll get around to revisiting this one again a couple more times in years to come. Whether I do that or not, though, I think this film is something which deserves to be seen and I wish that it could have had a greater marketing push levelled at it than I’ve seen so far. If you’re into cinema then you’ll probably be into the cleverness and bleak charm of this movie. It put me in a bit of a dark place... but that’s not always a bad thing. This one will haunt you a little, I think. Go check it out before it disappears.