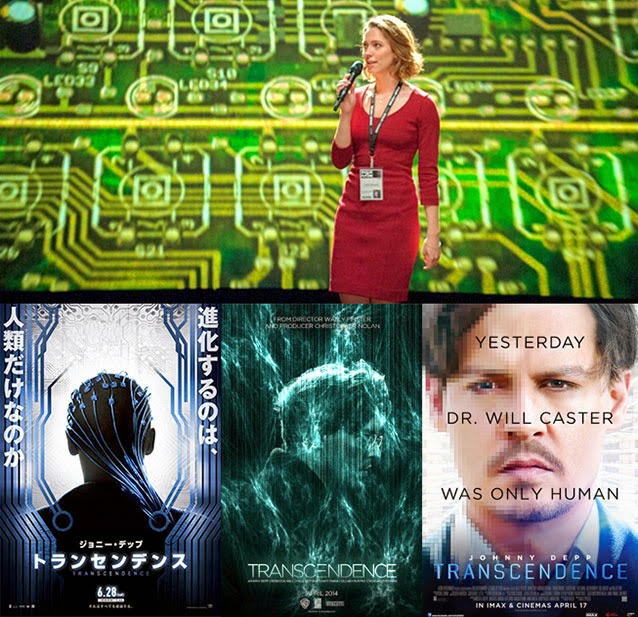 Warning: Some slight spoilers here...
most of which are in the trailer anyway, to be honest.

It strange the way things work out sometimes.

I saw the trailer for Transcendence a fair number of times at the cinema, for at least a month before its release over here. My desire to see one of the better actors of our time, Johnny Depp, in something that looked like a film rooted in fairly hard science fiction concepts, albeit probably recycled via 1950s and 1960s short stories, was so tempered by the fact that the trailer made the film look about as exciting and as intriguing as an unused tea bag, that I’d pretty much decided to just give the movie a miss. Or at least, ignore it for long enough so that the choice of whether I really had to go and see this thing or not was taken away from me by default.

However, since my internet connection at home had been out for something like a month, which is ironic given the subject matter of this film, and since it was a Sunday afternoon and the sun wasn’t completely covered up by black clouds, I found myself bored enough that I decided a walk down to my local Cineworld wouldn’t be too terrible a waste of my time. And so I went and saw it anyway... and I’m rather glad I did.

Transcendence is a movie that has a celluloid heritage which is perhaps best identified as it being a descendant of various “computer consciousness takes over” sci-fi films of the early 1970s such as The Forbin Project and Demon Seed. While it would certainly be true to say that it is, as I’d suspected, one of those modern 50s/60s recycled concept movies we’ve been getting so much of lately, it has to also be said that this movie carries off its recycling with a certain amount of panache and technical competency from all the cast and crew.

Johnny Depp plays a clever science type, called Will Caster, who has ben experimenting with computers to the point that he now has what he’s pretty sure is a self aware machine. He dreams of ultimately finding a way to transcend the human creatures populating the planet and upgrade them as a next stage of human evolution... conquering death in a brief nod to Frankenstein, perhaps. At a conference with his equally clever science type wife, Evelyn, played by Rebecca Hall (who I’ve loved since I saw her as the lead protagonist in The Awakening, reviewed here) and his friend Max, played by Paul Bettany, Will gets shot by a member of a group of anti-AI nutters... although he initially survives the shooting. As an FBI agent played by Cillian Murphy tells him, various of his science buddy colleagues aren’t so lucky with, in one particular set of offices, a professor played by Morgan Freeman being the only survivor... due to blind luck more than anything else.

However, it turns out Will isn’t as lucky as he thought, as the bullet he was shot with was laced with a radioactive chemical which will slowly kill him over the course of the month. Before that happens, however, Evelyn turns him and Paul Bettany’s character Max onto the idea of uploading Will's consciousness into an AI.

Now you all know this is obviously going to work otherwise you wouldn't have a movie and the film soon becomes a cat and mouse game between Will’s enhanced consciousness, which has been downloaded into the internet and controls the entire world, and the group of ludites who shot him in the first place and who recruit various of the characters to their cause. As the situation seems both threatening and also wonderful simultaneously, the stakes are raised and pretty soon Will is enhancing humans into super beings and even, at one point (and this is in the trailer so I’m hopefully not giving anything away here... although if you don’t see this one coming you must be very young), building a new body identical in looks and feel to his old one for himself.

By the last part of the film, where all out war between the AI and our brave cell of misguided and not so misguided idiots is reaching some explosive moments, the film turns out to be a film about love and sacrifice... but with Will anticipating every move made against him, just who is going to be doing the sacrificing?

Like all good sci-fi, even the warmed up leftovers from decades gone by, Transcendence explores concepts such as “just because you can, doesn’t mean you should” and also gets into the old chestnut of “What is a human soul?” and "How does one define the state of self awareness?". Questions which can’t be answered, perhaps, in the real world but, to this movie’s credit above other stories of a similar nature, one of these questions does get answered in terms of the main protagonists in this movie and I was really pleased with the ending of this one, which turns out to be not the one you’re necessarily expecting. Thank goodness.

It’s not a perfect movie by any means. Some of the sequences seem a bit wrong in terms of their placement in the movie. For instance, only a couple of hours after being shot in the torso, Johnny Depp is out and about and talking to his friends, and the FBI, in his office, while showing off his AI programme. Similarly, a cut from a perceived danger to one of the protagonists is suddenly shown to be something the character in question is expecting and able to act on straight away with no questions asked... which could be explained within the context of the story just about, if you want to make excuses for it, but which ultimately is not something the audience has any knowledge of and which kinda grates when you see it happen. Similarly, a series of sequences which you assume to take place over a number of months given the amount of screen time allocated, are followed at one point by a scene which takes place only two days after the start of the events in one of the sections of the film... which doesn’t make sense and which I suspect has been re-edited to the place where it ended up to remind audiences of the FBI character... rather than have it play out as a slow build, which would have been preferable. I don’t mind a movie about artifical intelligence as long as it doesn’t try to insult what little intelligence I myself possess, is my feelings about that.

The last 20 or so minutes, truth be told, feel a little dragged out, basically in terms of the story of the two main leads, the husband and wife, of the film... but it doesn’t ruin it and it does have a certain sense of beauty and melancholy about it which is worth the wait. Also, the film is bookended at start and finish by a sequence showing the aftermath of the event in the main body of the movie. Personally, although there is a twinge of possibility in the last shot, I would have preferred to go into the epilogue without seeing the set up at the start of the film because, basically, it tells you something of the outcome of the story before it’s even properly been started.

However, the cast are all amazing, there are some lovely shots, it has an incredibly fine score by composer Mychael Danna (the US Amazon CD-R is hopefully in the post to me soon) and, all in all, I was impressed at how a movie with such a tired old concept could be told so well, shot and edited so beautifully and, also, take me to a place where I wasn’t quite expecting the ending to go. It was always an option but it’s a bold writer, in this day and age, to outright tackle the issue of the soul of a man in a computer in such a definite and conclusive manner. So yeah, this one is, frankly, a well made and nice little sci-fi thriller with a little more action than I was expecting and which is certainly not the boring yawn-fest the trailer made it out to be. If you like computer oriented science fiction stories, then this one is definitely something worth checking out. I’ll be catching up with this again on blu-ray, no doubt.