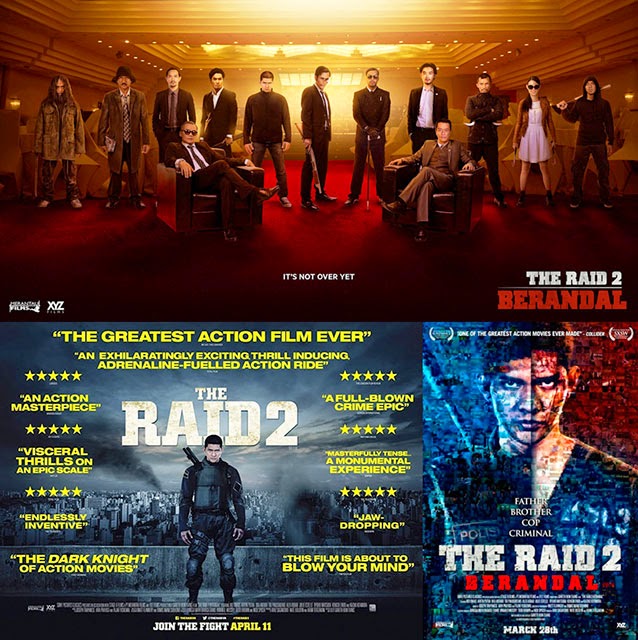 Warning: Very slight spoilers concerning the nature of some of the action choreography... if you count that as a spoiler... and the set up of the movie.

There’s a lot that could have gone wrong with Gareth Evans follow up to his hugely successful action move The Raid (reviewed here). One would have been the idea that you had to top the action sequences of the first movie to give the audiences all even more of the same multiplied by ten. The second would be to continue the structure of the first film in that you have it set in one location over a small number of hours.

I’m happy to say that, with The Raid 2 - Berandal, Evans not only doesn’t fall into either of those traps... but he also delivers another adrenalin fuelled, kick ass action movie which holds up on its own with its own agenda. Actually, that’s a bit of a double edged sword in some ways because there are certain characters from the first film you want to know about... but maybe they’ll get to that in a future installment.

And, to get any raised eyebrows out of the way on that last paragraph... yes, the action sequence choreography and editing in this movie is absolutely spectacular... but it stands up as being equal, not necessarily better than the sequences in the first movie. It does its own thing and as I sat watching this in the Cineworld Haymarket at the weekend, I could feel the collective pulse of the audience speeding up at the sheer, gruelling intensity of the combat sequences in this one.

Starting a mere two hours after the events of the first film, rather than continue the thread which that film left open, the fate of Rama’s brother and the family bond that tied them together on separate sides of the law, this story absolutely ignores that and uses the fallout of the events of the first movie to kick start a different plot involving the main protagonist Rama (again played with huge amounts of energy by Iko Uwais) deliberately serving time in prison to set himself up in an undercover operation. And, of course, as soon as this is fully explained, through use of cross cutting to flashbacks and the camera recording Rama’s current prison environment, the action starts to take over... with a beautiful sequence set in a prison toilet cubicle, where Rama takes on a larger number of people then could effectively fit in such a place. We’ve seen these claustrophobic kinds of fight scenes before (most notably in Danny The Dog aka Unleashed with Jet Li) and it kind of harkens back in terms of film history to the fight between Sean Connery and Robert Shaw in the train compartment in From Russia With Love... but this is a truly dynamic sequence and it's only the first action piece in the film.

This opening punch up is followed up with another, truly memorable fight sequence, which is set in the muddy prison courtyard, straight away recalling to mind, at least to this member of the audience, the final rain and mud soaked battle in Akira Kurosawa’s Seven Samurai. Then the film jumps ahead two years and the hero is propelled into the outside world, having infiltrated the criminal organisation which puts him right where the chief of the special police unit in charge of such matters wants him.

The film is impressive in many ways and it’s not just the action sequences which require your appreciation. The style of the camera work, with long, slow zooms and pans as the intent of the major players are revealed in scenes involving dialogue, rather than lots of punching and kicking, are quite sedately paced and this is a smart move by a director who values the effect of having long gaps and moments of rest between the action. It’s a good thing to do if you want the raw energy of those sequences to stand out even more and it’s something a lot of masters of cinema have realised over the years.  Evans has got this clocked and the way he utilises the tension and release of the frenetically paced action rubbing visual styles with the serene moments of potential energy, before they become kinetic energy unleashed in some of the most painful and bone crunching ways, is surely a sign that this director is not just a flash in the pan and an artist worthy of your time.

And talking about tension and release... there’s a really clever piece of playing around with the audiences expectations and the moment of visceral, shock imagery when its least expected. It’s become, very much, a cliché in horror movies to make the audience think that something is about to happen and then giving them the old double bluff relief when a character goes to investigate something potentially scary and it turns out to be a false alarm (more often than not in the form of an errant cat)... before the main protagonist turns around, slap bang into the scary thing that the audience was hyped about seeing before it turned out to be a false alarm. It’s an old trick but it’s still used because it takes people unawares.

What Gareth Evans does is to take the same basic principal, but use it as a sucker punch to the suspense of a specifically nasty piece of violence unfolding before your eyes. To explain... like the first movie, The Raid 2 has a lot of violence which is implied by cutting away at the exact moment it happens and allowing the audience to imagine the worst. To be fair, it also has loads of violence which is full on bloody and brutal and witnessed in full, but in certain sequences Evans pulls away and lets the imagination take over. Now then, there’s a scene in this movie where three “specialists” in one criminal organisation, are taking out key players in a rival gang’s organisation and the three action sequences are cross cut with each other to make a lengthy action montage...

And this is where Evans does something really special...

In one sequence, a major villain has got his victim held down by two of his men and he is about to burrow down hard into a man’s head with a pick axe or some sharp object. You know it’s coming and you know it’s gonna be nasty. We see the object come down and... the director cuts away. But this is the beauty of it... he cuts back to a continuing sequence where a specialist martial artist who should perhaps best be known as ‘hammer girl’ is bashing and clawing her way through a load of men and, a second or two after he has cut away from the head shot, we see her bring a claw hammer down through a man’s head in exactly the way we were threatened with in the previous shot. So we get, tension, release as in the “oh good, we didn’t actually see it” and then we see the act itself after all, but via a different set of characters and a different instrument of ‘head bashery’.... which is then itself numbed out because the sequence is continuing on with more unstoppable and driven action fighting which forces us to pay attention and file away the moment in the back of our minds as we look at everything else that’s going on. This was pretty clever and I don’t remember it being done quite this way in a movie before. I almost clapped out loud at the arrogance of it. All good stuff.

The film is quite good looking and, when you’re not being edited to death at a ferocious pace (which is in no way incomprehensible at any point, in case you were worried about that aspect), there are some quite nice sets...many of which are decorated in red, I noticed. They catch the eye and hold the attention as the actors do their thing.

My only real puzzlement is that there are a couple of spectacular action sequences starring actor Yayan Ruhian, who played such a major bad guy role in the first film, which ended with his character’s death at the hands of Rama and his brother. Here, he plays a different character but, for some reason, he looks almost exactly the same as he did in the first film. He’s got such a recognisable face that I wondered why he’s in this one. It actually pulled both my friend and I out of the action for a few seconds as we tried to work out if he was playing a twin brother to the previous character or some such thing. Don’t get me wrong, I can see why a martial artist of such skill could only be beneficial to have as a person on set... but it was a strange move, I thought.

All in all, though, this in no way detracts from the basic scenario and I’m happy that The Raid 2 - Berandal differs so much from the first film in terms of the wealth of changing locations, the amount of time the story takes place in and the fact that there is generally more story to it, as opposed to the very simple set up of the first one. Bearing in mind the way this film ends... which I’m not going to reveal or spoil here... I’m now very much looking forward to seeing where the director takes us from here. It’s quite obvious that he’s not done with these characters yet and I truly can’t wait to see the next installment. For fans of action movies, I can only recommend this as being a definite must see to add to your list. There is much kickassery in this movie.