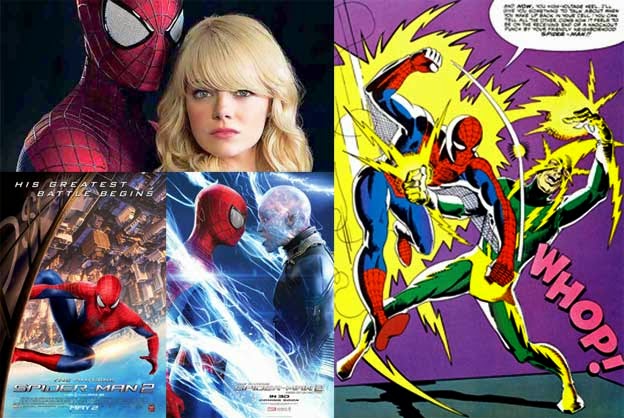 Warning: Big spoilers in this one.

Well, I think this is going to be a short review. Let me try to figure out what went wrong here.

The Amazing Spider-Man was called that from its first issue because of that character’s initial appearance in a successful issue of the comic Amazing Fantasy in 1962. However, the version of this and various other characters that appear in this current movie bear little resemblance to those running around in the first 100 or so issues of the comic (which is about as far as I read). It’s like the company has bought the rights to the characters and just done their own thing with them... which tells me they’re not aiming for a target audience consisting of fans of the original comics, that’s for sure. That’s a shame because, believe me, those early comics are cinematic enough that they would make great movies if adapted properly for the screen.

Now this film follows a fairly good opening movie, although it’s guilty of similar problems in translating the characters and situations to the screen. My review of the first in this series, The Amazing Spider-Man, is here and it also details the impact this character has had on me over the years. This sequel is pretty awful in many ways but, before I start pulling it apart, let me find the positives first.

The casting decision on the Harry Osbourne character is awesome. Dane DeHann looks nothing like the Harry from the comics but he is credibly able to go nuts in a sympathetic manner as he did when he played the central antagonist in the excellent teen superhero movie Chronicle (reviewed here), from a couple of years ago. Unfortunately he looks nothing like the Green Goblin either, not even being green, and his father has not yet, in this version of the story, been the former incarnation of the Green Goblin.

I don’t really know lead actor Andrew Garfield but he’s a very likeable personality and does what he’s doing here very well. He’s absolutely nothing like Peter Parker but the way his character behaves and is written is very much like the way Spider-Man is when he puts on his suit. He also has good chemistry with his on screen lover Emma Stone, who is equally likeable as Gwen Stacy. So these two are probably reason enough in themselves to watch this movie.

Okay, so other reasons why you should consider taking a look at this... um... okay. Well... no. Can’t say I can think of anything else. Let me now list the other bad things about this adaptation...

We all knew they’d be doing the death of Gwen Stacy storyline (or why have this character in there in the first place) but, Sam Raimi had already done that in his first Spider-Man movie... except he didn’t, did he? He took the exact situation of Gwen Stacy’s death, the original incarnation of the Green Goblin throwing her off a bridge and forcing Spider-Man to chose between who he saved, but Raimi substituted Mary Jane Watson in her place and, instead of dying from a whiplashed broken neck like Gwen did in the comics, caused by Spidey webbing her in an attempt to break her fall and save her, Mary Jane survived her onscreen version of this issue. In The Amazing Spider-Man 2, director Webb loses the specifics of the situation but keeps the whiplash element and Gwen does die... but it seems a cheaply won death after such a mess of a movie... at least to me it did.

Electro was my favourite villain in the original Spider-Man universe and I’ve always wanted to see him done right on screen. Looks like I’ll be waiting another good long while for that then. The white dude with the yellow and green costume culminating in a kind of starfish-electricity hat has been replaced with... Jamie Foxx playing him like a meek Spidey fanboy who suddenly goes mental, acts tough and can even convert himself into raw electricity. What a load of rubbish. I was heartbroken when it came to this aspect of the character... but they’ve also taken some pretty bad liberties with The Green Goblin so, I was getting distracted left, right and centre here.

Paul Giamatti, one of the great actors of our time, is just wasted here. The Rhino is not the mutated strongman of the comics wearing a latex rhino suit. He is an exoskeleton piloted by a Russian mobster. He plays a small role at the start of the film and then is ignored for the rest of the movie, despite the marketing campaign being heavily weighted by his presence, to be brought back as a kinda cheap punchline at the end of the movie. Admittedly, the scene where Spider-Man returns from retirement following the death of Gwendy to take on The Rhino is somewhat moving and will have the audience cheering but... seriously, it was underwhelming.

And I don’t know how this scene could have possibly been underwhelming when the movie was so slow and the villains, for the most part, so weak. The pre-amble to the creation of Electro was too long and, frankly, all the scenes with him in it, before and after his elevation to the status of super-villain, just seemed slow and boring to me. I took my parents to this one and they got so bored with it I had to keep nudging them awake. The action scenes with Electro were far from spectacular and, since you pretty much knew The Not-So-Green Goblin was going to kill Gwendoline Stacy in this, his scenes also felt like they lacked the necessary danger element.

Also, no J. Jonah Jameson (though he is alluded to), no Betty Brant, no Liz Allen and no Mary Jane Watson (although she would have been around in the same timeline in the stories as Gwen Stacy... they even resembled each other quite a lot). We have been teased with a character called Felicia who is quite possibly the same Felicia who will turn into The Black Cat... although she is lacking the white/silver hair here.

Even Has Zimmer’s music seemed to be all wrong for this picture. Jimmy Horner, who has a certain negative reputation with a certain segment of film score fans (including myself) did a credible and exciting score for the first movie. Zimmer, who is a composer I’ve really gotten into in recent years, delivered something that, on the few occasions I could actually hear it... since it was so buried in the sound mix beneath the various sound effects... seemed out of place. Now, I’m going to buy the album if it gets a release because I would like to actually hear what he did for this without the competing noise, but my judgement on it in the context of the accompaniment of the film was... not such a hot score. Which is kind of a shame because I really wanted to like this one. Maybe I still will, if the score album makes it into my player anytime soon.

And that’s pretty much me done with this movie. It was slow and boring, for the most part, and the only sequences which held any interest for me were the two handers between Peter Parker and Gwen Stacy and, again, Peter Parker and Harry Osborne. Oh, and the one other good thing was the ghost of Captain Stacy haunting Peter and flooding him with guilt every now and again... that was a nice touch. But, seriously, this is not a movie I would recommend to anyone with an interest or love of the main title character. I think I’d probably rather be watching something like Spider-Man: The Dragon’s Challenge from 1979 than this thing. Plaudits to some of the cast and some of the dialogue writing in certain scenes but, ultimately, I’d say don’t bother with this one and go see Captain America: The Winter Soldier (my review here) instead... it’s much, much better.