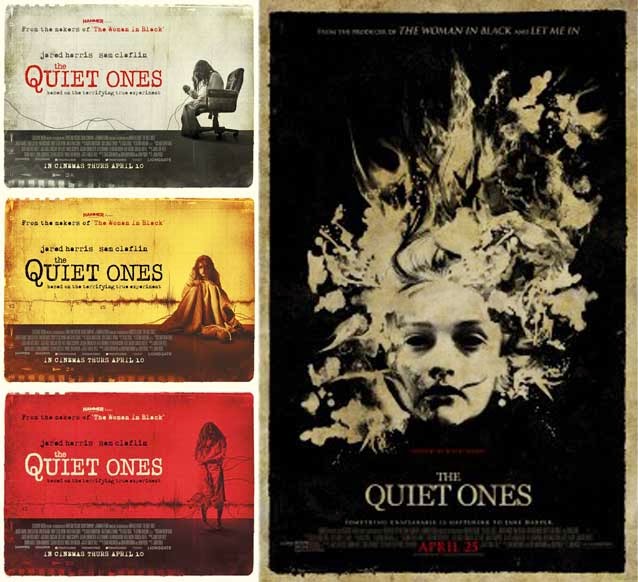 The Quiet Ones
2014 USA/UK
Directed by John Pogue
Playing at UK cinemas now.

The Quiet Ones is the latest British horror movie from the company who bought up, and have been trying to resurrect, the brand name recognition of Hammer Studios, best known worldwide for their cheesy but influential and, often, ‘rollicking good fun’ films in the horror genre. The new version of Hammer have either put together or distributed a number of productions over the past few years but inevitably, as with all film companies, their product has been a bit hit and miss, at least for this particular audience member.

The Quiet Ones is one of their more self aware and smarter movies of recent years and, although the last 25 minutes or so of the movie stray into the “decidedly cheesy” area of the genre, this does at least harken back to their days from their 20th Century incarnation and, overall, I’d have to say that this movie definitely falls into their ‘hit’ camp.

The film purports to be a true story (which I don’t think it is) of events which took place in Oxford in 1974, even going so far as to show still photographs of the original participants in the events to get people thinking over the end credits... which is good showmanship, to say the least.

The story follows a small cell of people conducting an ‘experiment’. They consist of a Professor, played by Jared Harris (son of Richard Harris) and some volunteer students, headed up by new cameraman Brian, played by Sam Claflin, who is called in to continue documenting their work after the last cameraman got cold feet (aka got scared off by spooky events). Their research, which they continue as a kind of outlaw band, moving to a new and, frankly, scary location after their funding is cut, involves the study and hopeful cure of a ‘possessed’ young lady called Jane Harper (played by Olivia Cooke). It is the Professor’s belief that the various, terrifying manifestations which plague the characters and which come from a malevolent child spirit called Evie are, in fact, nothing more than Jane Harper’s externalisation of her own personal trauma. The theory is to force her to manifest the ghost-like shenanigans to a point where the externalisation of these things can be yanked from Jane’s body, thus curing her.

Yeah, okay, it’s a shaky theory but, you know... go with it. We all know there’s something much less internal to Jane going on, right? It’s an interesting entry hook into a story of thumps, knocks, bruises, bites, fire, strange ectoplasmic manifestations and all the other things a good ghost story/demonic possession movie needs to start scaring the pants off the audience. And... up to a point, it’s quite successful in evoking that gold mine, pants free environment in your local dodgyplex.

One of the reasons that this is so successful, in fact, is because the film attempts something that a couple of horror movies have attempted in the last few years, usually unsuccessfully. That is, they try to maintain a “have your cake and eat it” approach to combining standard third person storytelling and mixing it up with “found footage” style first person shooting. Normally this really doesn’t work but, with a movie such as this, which makes no pretension at being a “found footage movie”, the two different techniques being utilised, when cut together, succeed admirably where most others fail. When used properly like this, and knowing how far to push the “camera eye” footage before they need to ground it in the external context again, it adds an extra kick to the film and definitely an extra appreciation of the scares which the production team cook up for us. Yes, this does use every tried and true, hackneyed technique in ‘horror movie syntax 101’ to achieve its purpose, of scaring you silly at certain points, but its done just right and with such a deft hand in most places that, when it does go a little wrong and into full cheesy mode for the over-the-top end set pieces, you can kind of forgive it that indulgence... especially when it fits in with the classic old Hammer modus operandi so neatly.

The film has a curious double ending, before the credits roll, and one almost brings to mind the very last shot of Hammer’s runaway smash version of The Woman In Black (reviewed here). I don’t want to spoil it but it leads very nicely into a second ending which is, in some ways, a little more uncomfortable and which references something which has been used as a shot transition, punctuation mark throughout the movie... that of a hand clapping against another, used as an impromptu human clapperboard. I won’t tell you the context of the last time this is used, because I really don’t want to give anything away, but it does make a nice little coda to the film, at least in terms of the cinematic language used throughout, and the consequences of the arrival to that particular scenario is something you are left to ponder at the end of the film. A haunting aftermath, so to speak.

The performances are all pretty cool, which I would expect from somebody like Jared Harris but which extends to the entire main cast in terms of excellence. Also nice is the evocation of the style of the time with the make-up, hair style and clothing which lend the film a certain air of authenticity for any claims that it’s based on a true story, by layering it with a sheen of yesteryear... which gives it a certain charming historical credence, so to speak. It certainly reminded me of my childhood, in some ways.

The music, too, does its bit. And I’m not talking about the song choice for certain scenes but of the underscore... which manages to walk that common but effective modern day horror music tightrope of sound design metamorphosing into something which operates on an almost subliminal level, walloping into atonal shifts of all the colours of the dark when required. Good stuff and I look forward to picking up the soundtrack CD if there is one.

All in all, The Quiet Ones does get a bit ridiculous in the end but, it’s carried across with such style and conviction by the time it reaches its denouement, that you can certainly have a good time with this one if horror movies are your thing. Definitely one of the better horror movies of recent years... not the best but certainly beyond the competent and into something a lot more effective than much of the lesser product on the market. I’ll certainly be watching this one again when it comes out on Blu-Ray.
Posted by NUTS4R2 at 07:44