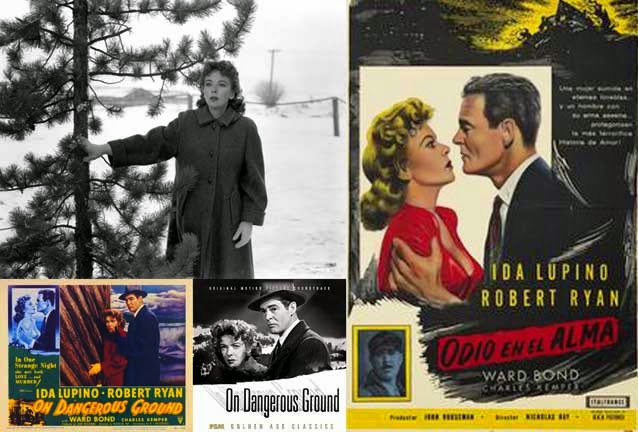 This is a movie I’ve been wanting to see for a long time now, mainly because I love the score by my favourite composer, Bernard Herrmann, and, as far as I’m concerned, it’s one of his best works. When the opening titles start, Herrmann’s frenetic musical prelude wallops you in the ear drums like a repeat offender high on acid and wanting to cave your skull in. But more on Herrmann’s scoring later.

This movie is very much the epitome of film noir, as far as I’m concerned, dealing with a gloomy and not clear cut subject and shot through with an almost perfect design sensibility which really pushes the dark and light tones to a high level of contrast and highlights the characters and their place in the plot with a less murkier edge than the manifestation of their inner world would suggest. In other words... Wow, baby! Dig the chiaroscuro in this picture!

The story follows a well intentioned, well respected but ultimately violent cop called Jim Wilson, played with amazing screen presence by Robert Ryan. His inappropriately heavy handed response to the criminal element impeding his investigations has not gone unnoticed by his fellow cops and he is getting a reputation for being harder to work with over time. To be sure, though, although there is a lot of grey tone in the character, Jim Wilson is the hero of the film... his intentions are honourable all the way through and he does seem to be following, or perhaps even starting out for all I know, a trajectory which movie cops have been tracing for many years. Perhaps the most notable example, and pertinent to this film, would be Clint Eastwood’s portrayal of Dirty Harry Callahan in a number of movies. The scene in On Dangerous Ground where Jim’s boss is remonstrating with him for his heavy handed techniques seems to me to be something which is very similar to the same kinds of scenes you’d see in those later Eastwood movies (not to mention various other famous vigilante cop movies).

After a scene where, once again, Jim goes nuts on a villain after the woman who gave him information is murdered for talking to him, he is ordered out of town into a snowy wasteland of a community to keep him out of trouble and assist in the hunting down of a suspect who has killed a man’s daughter. Before long, the victim’s father Walter (played by Ward Bond... Bert of Bert & Ernie fame in Frank Capra’s beautiful movie It’s A Wonderful Life) are thrown together and are hunting the suspect as a mis-matched team. Walter makes it no secret that he doesn’t want the big city cop around and that the shotgun he is carrying is going to be emptied unceremoniously into the killer’s stomach when he catches him. So it’s up to Jim to both try to catch the killer and also stop Walter from murdering him before he can stand trial.

After crashing a car they commandeer from a lady midway through the movie, they come across a cabin in the wilderness where they find the other main character of the movie, Mary, played by the late, great Ida Lupino. Lupino was one of the few female directors working in Hollywood, when she wasn’t in front of the camera, and she even helped out with directorial duties, uncredited, for a few days on this one when Nicholas Ray was taken ill.

The thing is, Mary is blind and, what we don’t realise at first, is that she’s also hiding the killer, her screwed up younger brother (himself only a teen). As Jim gets to know her she easily gets the measure of Jim and senses his loneliness and the film turns into a bitter-sweet romance with two very different but kindred spirits finding their way slowly to each other.

But enough of the plot... there’s some really great things happening here which lead up to... a really lousy ending. But, having now done the tiniest bit of research on the movie (see, no expense spared for my readers... oh, alright, I checked the IMDB) I now realise why I was so dissatisfied with the film’s conclusion. But I’ll get to that in a bit, too.

Okay, so first thing I noticed about the scenes in the first half of the film, which are all set in the city, is that is all seems to have an atmosphere very reminiscent of Blade Runner. I was trying to figure out why and I reckon, and this is just a guess so if I’m wrong please drop me a line in the comments section, that the external street scenes at the start of the movie were shot on a big indoor set. In fact, although it’s an RKO film, I wouldn’t be surprised if it was shot on exactly the same street sets which Warner Bros used to use for their gangster and film noir pictures... which of course were the same ones redressed and used for Ridley Scott’s epic sci-fi opus of 1982.

So that’s one thing about the atmosphere I liked.

The other thing about this is that the attitude of the cops on the beat, the low life they have to deal with and their tendency towards corruption and violence, felt to me like exactly the same kind of “vibe” I would get from reading a James Ellroy novel. The characters almost felt like they’d jumped out of the pages of something like The Big Nowhere or White Jazz. Now I know Ellroy was dealing with similar subject matter in his LA Quartet but, seriously, I wouldn’t have expected to find that kind of stylistic flourish accented in the films of this time period. Which makes me think Ellroy may be a big fan of these kinds of movies... which is really no surprise, if true, I guess. But I really enjoyed the heck out of the bleak, pessimistic heart of this movie.

Another thing which popped me right out of my seat during the first chase scene, and which is also true for a couple of other sequences in the movie, was that the director had used hand held camera for certain moments to make the action look chaotic and give it a jangled point of view appropriate to the on screen action. Now I thought this “raggedy up the shot” kind of experimentation for this specific effect had started some time around the 1980s but here it was being used in the early fifties and in monochrome. I checked the IMDB the next day and found that, indeed, this film is considered to be one of the earliest uses of this technique committed to film... so that’s kinda interesting (not counting Abel Gance, I guess?).

The shot set ups are quite stunning and, considering it’s filmed, more or less, in a 1.33:1 aspect ratio, not what I would expect to see in a film like this either... with the screen split into sections at some points and, in one unforgettable moment with Ida Lupino in her home, sliced in half, mid-screen, by a giant piece of tree which is stood there so that Mary can use it to help guide her way through the house.

The performances are all pretty much fantastic, as you’d expect from a film of this era, but the ending felt rushed and unsatisfactory. I won’t spoil that ending for you but I will say that, since watching the movie, I’ve found out that the sequence where the witness is murdered was originally supposed to have been held off until the scene just before the very last little sequence of the film and, frankly, it would have made a whole lot more sense, for both of the main protagonists, if it had been left in that chronology. It would have certainly given the ending a little more credibility... at least in my book.

And then we come, as I inevitably do with movies like this, to the music.

Bernard Herrmanns score knocks it out the park... knocks it out the park so much that it flies all the way around the world and hits you round the back of the neck. At times frenetic, at times extremely slow paced and romantic, the score comes across as a more furious take on his action style scoring for a Hitchcock movie, contrasted with long stretches of the kind of romantic and tender sound you’d find in his scores for movies like The Ghost And Mrs. Muir. There are some definite bits of score he kinda, erm, reworked for later scores in this film, including two passages which would later be used in Hitchcock films... one in Vertigo and one in North By Northwest (he’d be enraged with me for saying that but... it’s all there in the music, I’m afraid).

One other little studio story for you about this movie, this time regarding the generosity of the composer.

Herrmann was so enamoured of the quality of Virginia Majewski’s performance on the Viola D’Amour that he asked she be given a separate credit in the opening titles. The studio’s excuse at refusing this request was that they told him there were no more title cards left for the timing of the credits... to which Herrmann famously replied, “Put it on my card.” And there it is now in the opening credits... “Music by Bernard Herrmann, Viola D’Amour by Virginia Majewski.” You can buy Film Score Monthly’s brilliant restoration of the score here and listen out for the bonus track of outtakes at the end, where you can hear Herrmann’s heavy Brooklyn accent in a compilation of moments of his chewing out the orchestra for screwing up the various takes.

On Dangerous Ground, a very slightly flawed but still damn near perfect film noir, in my book... with a simple story that lets the actors breathe and allows the visual design to gather you up in its atmosphere. Definitely one to watch, I would say.