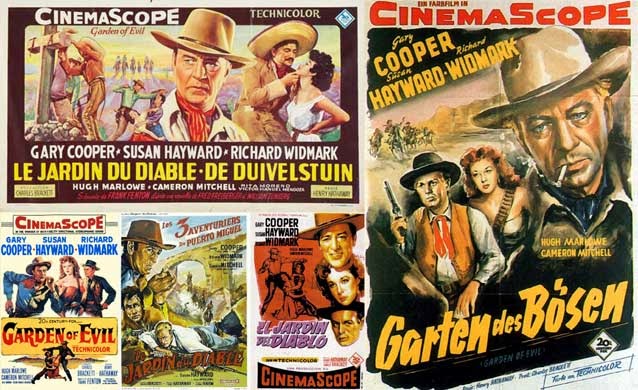 I first saw this Western on TV over 20 years ago. I remember I made a point of recording it on video, off air, because I was interested in hearing Bernard Hermmann’s score for this movie within the context of the actual film... so nothing much has changed with my motivation for watching some of these movies in the intervening years then, I guess.

I remember really liking this one but it was probably shown in a 1.33:1 aspect ratio and just dumped like that onto TV by an uncaring channel for a less than demanding UK public. Now the film is available on DVD ( I got this one very cheap at a Film Fair) I can finally see it properly, in its full 2.35:1 approximation of the Cinemascope aspect ratio in which it was shot.

The film starts off with three cowboys played by Gary Cooper, Richard Widmark and Cameron Mitchell, being rowed to shore after the steamer they were journeying on (actually an anachronism in the particular time and place this film is set) breaks down and they are stranded in Mexico for possibly a few days/weeks. About the only thing you can do here is drink at the local saloon bar and watch the lovely, young Rita Moreno sing at you. Unfortunately, Miss Moreno is only in the film for a few minutes, for one scene, to make a point about the characters and the kind of one horse town the three cowboys find themselves in. Then the real story kicks in as Susan Hayward rides into the place looking for volunteers to accompany her back, over the course of a few days ride, to the goldmine she has been working in and help pull her, probably dying, husband out from some fallen debris in the mine. The journey is a dangerous prospect, though, because the mine is deep in hostile Indian territory.

Of course, since they’ve nothing better to do, and because Miss Hayward is offering a large amount of money for their trouble, the three cowboys and a local Mexican pitch in and join her in what starts off to be a kind of road movie in terms of the trip to the mine and the way the relationship between these five individuals develops on the trip.

We have Víctor Manuel Mendoza as Vicente, the Mexican who is covertly marking the path to the hidden gold mine, presumably so his buddies can come back later and take all the gold for themselves. We have the young, proud, troublemaking hothead Luke, played by Cameron Mitchell, who rubs everybody up the wrong way and who you know will be the main villain of the piece until the Indians come along later in the story to take over that tonal role. There’s Richard Widmark playing Fiske, a professional gambler and self appointed poet who talks a great deal and is the perfect verbal crutch for the other male member of the expedition, Hooker. Gary Cooper plays Hooker, and he plays him as the kind of guy who says little but, when he does say something, you have sense enough to quit yer yapping and listen up good... well, unless you’re Cameron Mitchell, apparently. Hooker assumes a quiet sense of authority and leadership for the group without even trying and it’s obvious he’s the real man’s man hero of the piece... and it’s a part he plays really well, as do his fellow actors and actresses... all play their parts convincingly and with gusto.

I never realised, the last time I watched this, just how much of a misogynistic movie this is. Susan Hayward plays Leah, who is bringing a rescue party for her husband but is seen by the men in the party, especially Cooper and Widmark, as an attractive and desirable woman which, obviously, means she’s dangerous and not to be trusted. She is portrayed as a user and someone who is bringing calamity slowly into the path of any man she crosses, something her husband acknowledges when the five of them finally get to him in the mine but, honestly, she’s really not and I found the tone of this film a little strange in this respect. Cooper even knocks her out with a full on punch at one point in the picture... for noble reasons, of course.

The film is fascinating in this manner though. A brooding, psychological study of a powerful woman and the way the men in her life acknowledge and accept her power over them in spite of their recognition and disdain of it. The landscapes have a mostly dark and brooding tone, too, and a lot of the film is talk with no action, to be honest... but when the talk is this interesting, you tend to take notice and listen anyway.

When the bursts of action do come, however, Bernard Herrmann’s deeply brooding score, which is mostly echoing the internal, psychological landscape of the picture in the way that only he could do it, pulls out all the stops and really hits you with the brash, loud, swirling repeat vortexes of music that he does so well. There’s nothing especially subtle about those strong, “balls to the saddle” chase pieces in this film and his notes have your head spinning as he waves his magic baton and the orchestra crashes in for the kill.

It’s been noted, often, that this is Herrmann’s only Western score. Well, that’s not quite true actually. Most people tend to overlook the odd TV Western episode and the stock library of Western music he created for tracking in for various instances in these kinds of shows but, certainly, it’s definitely his only big screen foray into the Western landscape and, typically for Herrmann, this score follows practically none of the conventions of any Western scores you’ve heard before or after. There’s literally a couple of minutes, no more, of standard Americana Western style scoring to punctuate the “lazy ride” kind of music you would expect in one of these oaters, for a saddle bound dialogue between Widmark and Cooper in an early part of the journey to the mine. The rest of the score, though, is either intense and brooding... or a gut churning maelstrom of fast menace for the action sequences. It’s not what anyone would be expecting for a Western score and maybe that’s why Herrmann was not hired to ever score one on film again... but it’s a real kick ass score, for sure, and the main reason why I wanted to watch this movie again.

The dialogue is unbelievably quotable too. Razor sharp lines where everyone who says anything seems to be making a point about something. Cooper’s character, Hooker, says a number of things worth hearing throughout the movie which support his natural authority over the other characters. For instance, when contemplating a very negative dialogue with Susan Hayward, he follows it up on a verbal antidote with, “After all any man says, it's what he does that counts.” When making a decision to stay behind on a narrow cliff edge and fight off Indians single handed, while the remaining survivors of the trip thus far use the time to get away, he states that, “Somebody always stays. Somebody all over the world gets it done.”

At the end of the film, though, Cooper does seem to get a little overly cryptic. He finishes off his memorable one liners with this little gem... “If the earth were gold, I guess men would die for a handful of dirt.” Which is like... um... okay. I might paraphrase and say, if ladies were potatoes then men all over the world would be dying for a packet of Salt N’ Vinegar crisps... but that wouldn’t mean much either, to be honest. But the way Cooper delivers lines like these is priceless and well worth the price of admission alone. I’d love to see this play in a cinema with an audience at some point.

So there you have it. Garden Of Evil. Unusual Western. Brilliant film. Well performed and, I have to say, really nice use of the cinemascope aspect ratio compositionally by a director and cinematographer who really know how to make use of the format... splitting the screen at times so extreme right and left are pitched against each other and not having to worry, like some directors have to, these days... if they choose to work in that kind of aspect ratio... about how it’s going to look cut down at the sides on television screenings (yeah, lots of channels here in the UK still commit many crimes against filmanity of this nature every day). If you’re curious about a moody picture which is essentially a road movie in disguise, where personalities are pitted against each other while uniting in a common cause, then this movie might be worth a look. If you’re into Westerns in general then it’s definitely worth a peak as it seems, to me at least, to be a little different from what you might be expecting from this era of Hollywood Cowboys and Indians. Either way, hitch up your slacks n’ skirts and climb in the saddle with Cooper and Co for Garden Of Evil. You should have a galloping good time.
Posted by NUTS4R2 at 19:27