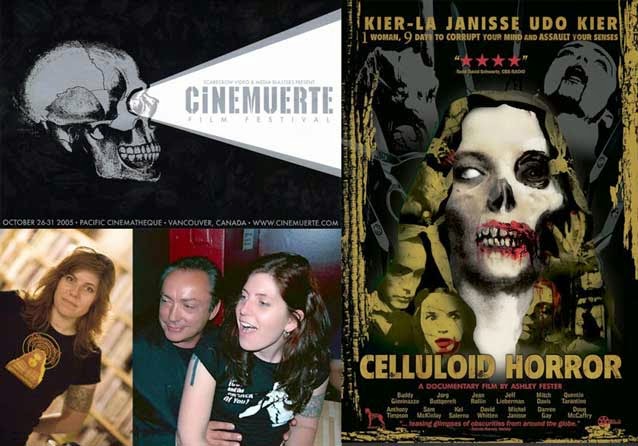 I first became aware of the existence of this documentary about Janisse from the introduction to her book, House Of Psychotic Women. I read that earlier in the year and was pleasantly surprised by what a knowledgable and entertaining read it was... there’s a reason why I called it, pretty much, the best book on the exploitation and horror genre in film I’d ever read and, if you want to read my review of that book, you can click here.

Although this film has less of the “case history” of Janisse in it, one of the things which helped make the book so unique and fascinating in its approach, I was pleased to see some of the real life “characters” of her past, such as “Warren Oates Dad” and “George C. Scott Dad” making brief appearances in the documentary, so I could put some faces to names. The film certainly lets you get an alternate flavour of the woman and her tireless energy in making quite daunting things happen for her creation, the Cine Muerte festival. It’s a pretty entertaining piece and it seems to be less angled at painting a specific bias or promoting a hidden agenda in its focus... which is unusual for a documentary, to be honest. The only real pitch it seems to be going for is all out fun and the promotion, vicariously through the lady in question, of the legitimacy of horror and exploitation cinema as a serious artistic pursuit in and of itself. Hey, no argument from me on that one. Preaching to the converted.

The film struck a cord with me because of the naivety of Janisse when she started trying to get films for the very first festival, in regards to the kind of money involved. I myself had been looking into getting into programming screenings a few years ago but a seminar on just how to do it left my face white with the amount of money in different kinds of licences you have to pay out just to get one film screened... and that’s assuming you can even get in contact with the various rights holders. When I looked at the amount of time I would have to put in and the various other factors involved in that particular route to regular screenings, I realised there just wasn’t enough flexibility in my day-to-day existence for me to fit it in around my work life. Fortunately for Janisse, it looks like she was in a position at the time where she could just about drop stuff in her life to pursue these passions... but that’s not to say it was in any way easy, far from it. You have to admire her tenacity in her pursuit and there are several stories highlighted in the film which show her importance within the realm in which she has chosen to plough her love for film into something which can be beneficial for her audience... even if it means taking a loss on it. There’s an interesting anecdote about French vampire surrealist Jean Rollin, for example, and the long journey to getting even a willing participant such as him to turn up as a guest at the festival.

Also, she was one of the people championing The Isle, a great movie I was trying to push to people’s attention back around about the start of the millennium (I believe the UK DVD is still sliced to buggery by the BBFC, so grab a Hong Kong edition if possible). I didn’t realise she was actively involved with getting it screened in Canada but that gives her even more brownie points in my little black book, as far as I’m concerned. More importantly, she got the ban lifted on Jörg Buttgereit’s Nekromantik in Canada, by being quite shrewd and challenging the censors at an appeal level by spotting their deliberate agenda based ommissions from their own case against lifting the ban and using it against them. So.... one smart cookie.

Also, between her excellent book House Of Psychotic Women and this documentary, it’s even made me kind of interested in seeing the Nekromantik films too... something I wasn’t all that bothered with until now... so that’s kind of interesting (luckily for me, Arrow Films are releasing an uncut blu ray in the UK this year... so I shouldn’t have too long to wait).

The documentary is really well put together and uses a lot of clips from genre films to either illustrate, decorate or, occasionally, push a point someone is making, and this is all well and good. Some of the footage is not footage which is certified over here in the UK actually (and I’m thinking of an animal killing from Cannibal Holocaust) so that’s all really interesting. And, of course, you also get to see the audience reactions a little bit when she screens some of these films at Cine Muerte... which is kinda fun.

And talking of fun, I think my favourite bit is the footage when she manages to get Udo Kier over for a week. He’s a cool guy and it’s just brilliant when, because subtitled prints haven’t arrived in some cases, Udo, Kier-La and a bunch of her friends “live dub” some of the films for the audience as they are watching the film. There’s some footage of them all trying to dub the excellent giallo Black Belly Of The Tarantula, for instance, and Kier-La is just trying to keep a straight face while saying her lines and just failing hilariously throughout. This is brilliant stuff. And to top it off, at the end of Udo’s week, they present him with an award in the form of a giant sized bottle of J&B whiskey with the inscription “For Lifetime Achievement In Eurotrash - Udo Kier”. I’m sure lots of my readers are regular J&B spotters, as they always turned up in a lot of gialli, police thrillers and various other Italian exploitation films throughout the 1960s and 1970s... so the form of the award is totally appropriate. They go on to confirm that Udo drank the bottle full of whiskey that night... which is another thing that cements his cool, wild man reputation, for me.

So that’s it for this one. A cool documentary which tends to use the music of Goblin quite a lot, specifically the main themes from Suspiria and Deep Red (aka Profondo Rosso), which is kinda puzzling actually because I don’t remember director Dario Argento even getting a mention in this movie... but still, a really entertaining piece and one that gives you a nice look at the bubbly enthusiasm of Kier-La Janisse, which is not how I’d imagined her when I read her truly excellent book House Of Psychotic Women (again, that book reviewed here). Definitely worth a watch and there are some nice extras on the DVD, including a segment of the film which was heavily truncated in the documentary itself, restored as a lengthy segment, and the full interview with Kier-La Janisse and Udo Kier on a talk show... not to mention a whole load of exciting photos and things of that ilk. Definitely worth a look if you can get your hands on a copy. See Celluloid Horror if you are into scary, gory movies and exploitation but, absolutely, definitely, make sure you read Janisse’s excellent autobiographical genre study House Of Psychotic Women too... both these things are well worth your time.