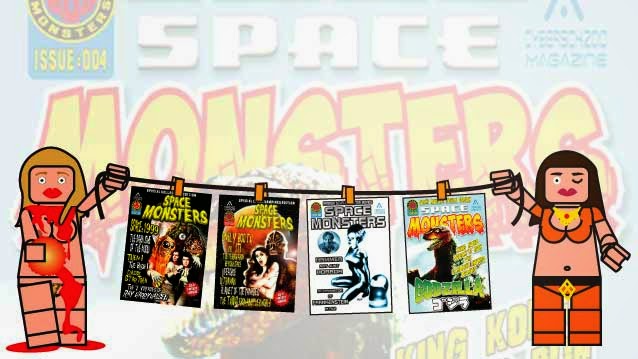 Back in the late 60s, 70s, and early 1980s, when I were a lad, magazines were a much more important part of the cultural landscape than they are nowadays... when pretty much everything you ever wanted to know about anything is now available on the internet 24/7. Back then, though, if you wanted to re-watch an important movie moment in your minds eye (these were the days before commercially affordable home videos remember) or get all the information about your favourite actors, actresses and movie genres, then magazines were one of the few affordable ways of doing this. And that was no less true for fans of the science fiction and horror genres such as myself.

I remember the random magazines I used to buy as a kid with fond memories on the rare occasions I could actually save up my pocket money. There were the two big science fiction bedrocks for all us kids n’ teens, Starburst (I remember buying the first ever issue which I still have to this day) and Starlog (check out those back cover vinyl soundtrack ads for films like Maniac and Tenebrae for a good time kiddies) and then there was the main horror magazine Fangoria (I don’t remember ever owning an issue myself but it was the definitive one around for that particular target audience). Plus there was a fair amount of random publications, riding the science-fiction bandwagon the success of Star Wars had set in motion, which never seemed to last for more than a single issue before folding... these had names like, if I remember correctly, Star Force and Space Wars.

Another big mainstay of magazines on the shelves in those days were the poster magazine tie-ins to the big blockbuster movies, which were often, quite deliberately, only single issue runs... unless they were for a really big franchise like Star Wars. These were minimal in content and opened out into a, more or less, A1 poster.

There were also the fanzines, which tended to be mostly A5, black and white concoctions, similar to a newsletter, which were put together “by the fans, for the fans”. I had a couple of Doctor Who ones and some of these were extremely good for imparting information not found elsewhere in the spectrum of magazines on sale in your local newsagent, although they were a lot harder to find and you usually needed to look in speciality shops such as Dark They Were And Golden Eyed, Forbidden Planet and Eye In The Pyramid if you wanted to get a semi-regular fix.

I mention the fanzines because the fortunes of the humble print magazine, over the last decade or more, have declined considerably and those which have survived, mostly as digital publications, tend to be less unique and, at least in the case of this humble scribe, less read... once they’ve slipped into a digital shadow of themselves. However, just recently a resurgence of these kinds of fanzines have sprung up again in print and are aimed at readers interested in sci-fi, horror and exploitation in the same way that their ancestors were “back in the day”. One of the newer, and quite successful, of these has been Space Monsters Magazine, put together by @cybershizoid (aka Richard Gladman) and his crew of intrepid explorers of some of the trashy and, sometimes, less trashy movies and TV shows of the last 100 years or so.

Now, this is the first time I’ve talked about a magazine here on my NUTS4R2 blog. I usually deal with movies, TV shows and the odd book (sometimes, very odd) but this particular publication is a pretty nice throwback to the kinds of things I would have wanted to read as a kid if a) I had more pocket money and b) I had a better stocked newsagent... so I’m really happy to be able to cover these treasures here.

The first four issues cover some great little movies and TV shows and, while having a large bunch of writers is always going to be a hit and miss affair in terms of which particular reviewer is going to strike a cord with you, it has to be said that there are some cracking reviews in the four issues so far and some of the articles are exceptionally entertaining, to boot. Lurking within the colour covers are reviews of such genre classics as the Quatermass movies, Kolchak: The Night Stalker, Space 1999 (yeah, @cybershizoid has always had a bit of a Space 1999 fetish, it has to be said), various Hammer classics and, of course, various kaiju eiga such as the Gojira (Godzilla) movies and the various monster mash-ups found within those Japanese thrill rides.

Added to this, you have a couple of issues with a column by celebrity horror girl Emily Booth, who writes up a couple of nice reviews and also, and this really blew my socks off, a new column starting in Issue Four written by “the first lady of fantasy” herself, The Caroline Munro Diaries. Actually, this last column was the one I was most anxious about reading because I’ve been a fan of the lady in question since I used to see her on Lamb’s Navy Rum posters on the tube trains in London (when I was a child model... don’t ask) and in films as a child of the 1970s... and I was wondering if she would be as good a writer as she is an intensely beautiful actress. Having met Caroline briefly a number of times at signings over the last few years and finding that she’s an absolutely lovely and kind person in real life too, I was extremely interested in seeing how she came off when she put pen to paper and, as it turns out, I needn’t have worried in the slightest. Her first column, which deals with her relationship with the iconic stop motion artist Ray Harryhausen (she starred in The Golden Voyage Of Sinbad, of course), is absolutely brilliant and, wowsers, really well written to boot. Having read this, I absolutely can’t wait to read more of her writing in the autobiography she is planning to release later in the year.

I also can’t wait to see what else she, and all of the other writers of this beautful throwback publication to simpler times, have to say in the next issue of Space Monsters. Being a “reviewer” myself, since starting this blog four years ago, I find it personally interesting to see how films I have written about in here (and there have been a fair few of them also covered in Space Monsters) are tackled by some of @cyberschizoid’s talented writers... quite often they’ll take a completely different tack to what parts of a movie I’d choose to highlight and that’s what makes writing this kind of stuff so invaluable and refreshing. There’s a real abundance of good, solid bloggers and reviewers existing in cyberspace right now and Gladman is obviously encouraging this freedom within the pages of his magazine. This is a really lovely publication and I hope it continues to flourish and grow because, if nothing else, you can feel the enthusiasm of the writers for their subject matter and this really counts for a lot when it comes to investing your money and time in reading a regularly released magazine.

The mix of writing styles and the diversity that these writers might not necessarily be allowed to pursue in a big, corporate publication is what keeps them fresh and, dare I say it, relevant in an age where a lot of the same information can be found for free on the internet, perhaps, but not necessarily with the kind of love and dedication bestowed upon it by the writers of Space Monsters, who obviously cherish their subject matter as much as their readers do. This is a magazine which deserves its success and if you are interested in these kinds of genre classics... and not so classics... then you should definitely pick up a copy and see why a certain big comic company's old catchphrase has been transformed by those in the know to... “Make Mine Monsters”. Why don’t you give it a try, it hopefully won't bite but, if it does, it’s probably not contagious.

Space Monsters Magazine can be bought here and at all “clued up” magazine outlets or, if you are more comfortable with living in the 21st Century than I obviously am, you can purchase the digital editions here.
Posted by NUTS4R2 at 19:27