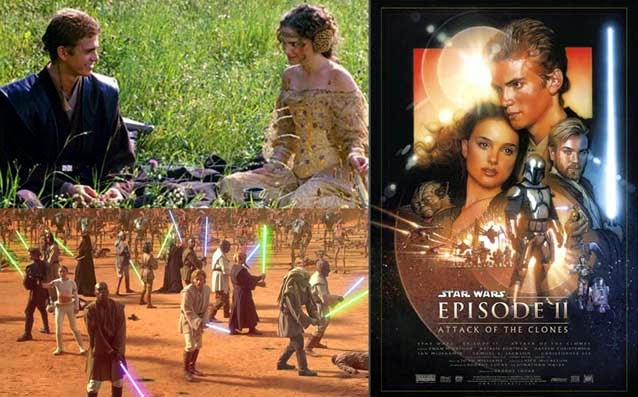 Clone With The Windu

I have really mixed feelings about Star Wars Episode II: Attack Of The Clones. If you read my review of the The Phantom Menace (which I reviewed for the 3D cinematic re-release right here) you’ll know of the very strong bond I feel with the Star Wars universe since I first saw the very first movie play in the Dominion cinema in London at the tail end of 1977. You’ll also know from that review that, despite a lot of people being less impressed with Lucas’ first prequel, I actually rated it quite highly. I couldn’t understand why a film almost as dark as The Empire Strikes Back was not realised as such, just because it was wearing a happy face, so to speak. It wasn’t until I saw Revenge Of The Sith with some friends and had to explain it to them years later, that I realised a lot of people just didn’t have a very good idea of the back story to the original 1970s trilogy... so a lot of them didn’t realise just exactly what was going down in The Phantom Menace.

Now don’t get me wrong. I was losing a lot of love already for my childhood hero George Lucas, after the frankly disastrous “modifications” he made to the original trilogy on the late 1990s cinematic re-release of the movies... but The Phantom Menace was a triumph for me and I couldn’t wait to get to the next one. Well unfortunately, for me, Attack Of The Clones is the one Star Wars move I really don’t like all that much and it just doesn’t feel quite like a Star Wars movie to me. Don’t get me wrong, there’s some nice stuff in there... the asteroid depth charge sound and visual effects, for example... but to me it all just seems a little flat.

Now I’ve got absolutely nothing against Hayden Christensen as an actor. I especially liked him in Jumper, but I don’t think his on-screen chemistry with Natalie Portman is that great here. It’s not as emotionless or wooden as people said back when the first reviews of this came out in 2002... but it’s not all that great either. There are some parts where the actor is saying hugely romantic things and not really getting away with it and, other times, when his emotions seem to be quite a bit repressed or non-existent when they shouldn’t have been, perhaps. Now I’m not going to blame the actor for this stuff because I suspect at least some of the reasons why certain of the scenes don’t work is because he may have been directed to deliberately dial things down or up due to the ultimate fate the character is heading towards. Also, it has to be said, a lot of the romantic, character building stuff is overly long and slows things down... and also that brings me straight into what I personally feel is another bad thing about this movie.

Pretty much all the other Star Wars films in the original trilogy are very pacey and you’re not very far off from entering or leaving an action sequence throughout their running times. The Phantom Menace follows in the footsteps of this beautifully and, Kurosawa comparisons aside, these were kinda supposed to be the modern equivalent of an old Universal or Republic style film serial of times gone by. Now I really don’t mind slowly marinating plots and action alone doesn’t do it for me in a movie, unless it’s deliberately setting itself up to be that kind of thing, but Attack Of The Clones has a delayed action chase about ten minutes in (after two assassination attempts which don’t really count as action sequences) where we get to see Anakin Skywalker and Obi Wan Kenobi in pursuit of Zam The Assassin... and then the film just goes dead in terms of action, to be honest. Some wonderous sequences fill this gap, to be sure, but frankly, over 35 minutes without an action sequence in a Star Wars movie seems a bit of a mis-step to me. I maybe would have liked my Lucas a little more Corman in this particular movie, perhaps, but maybe the weight of the story just drags it down too much for added action? I don’t know... but I thought this was an uncharacteristically empty gap for a Star Wars movie.
And talking about pacing...

Now I know this film had some problems when the first cut was reviewed by the director and I understand that a lot of the Anakin/Padme romance scenes were either re-shot or beefed up to try to get them to work better (at least that’s what was reported at the time) but... the timeline taking place between the film’s two main male protagonists, Anakin and Obi Wan, and the cross cutting between their separate exploits... don’t quite make sense when you compare them. See if you agree with me on this one...

These are the two timelines which are equally cross cut together across the running time at a certain point in Attack Of The Clones:

Obi Wan, pops into a diner to get a quick bit of info, drops in on Yoda, goes to the planet where a Clone Army is being built (posing as a customer) and has a quick look at them, gets into a scrap and then goes to another planet where he sends a message and gets captured. That’s.... what? Two days at the most?

Meanwhile, cross cut with this is...

Annakin escorts Padme back to Naboo, they spend some days/nights romancing, then they hotfoot it to Tatooine, Anakin spends at least an evening, possibly a day, tracking down his dying mother, then he slaughters a whole tribe of Tusken Raiders and, only then, after all that, do we get the message cross cut into things.

So, what’s that? About a week? And these two timelines are simultaneously cross-cut to give them a sense of happening in the same time? It doesn’t quite gel with the way it’s been cut together I think.

So I’m guessing what’s happened here is they reshot and added some extra bits into the Annakin/Padme timeline but... there was nowhere else to insert them into the movie which made any sense unless you made the, aesthetically not great choice, of not continually cross cutting between Obi-Wan and Anakin’s timelines. Which must have been really irritating to the people sitting in the editing room, I’ll bet. Now, to be honest, what they’ve gone with in the finished product is probably the lesser of the two evils and I think they made the best choice they had... but it still leaves your mind playing catch up with the temporal space in a few areas during the course of the movie and it does pop you out of it a few times.

Okay... that’s most of the negative stuff. What about the good stuff?

Well, the fight between Obi Wan and Django Fett is pretty good and brutal (it was originally cut at both British cinemas and all British home release versions until a head butt cut was finally waived for this Blu Ray release... which meant I had to pay out for an import copy of the DVD when it was first released to get it the first time around). The idea of the poisonous centipedes which infiltrate Padme Amidala’s room at the start is something which reads straight out of a pulp Sherlock Holmes or Fu Manchu story and perfectly captures the tone of what this film series is about. The action sequence in the arena at the end is like it’s been plucked straight out of one of Edgar Rice Burrough’s John Carter novels... so that’s kinda cool (if a little plagiaristic, perhaps) and the incredibly hard to even imagine until you see it dual between Yoda and Count Dooku is pretty amazing. Oh, that reminds me... Sir Christopher Lee doesn’t have a huge amount of screen time in this film but what he does get he really makes count. He’s just really phenomenal in this movie and his screen presence uplifts certain scenes tremendously.

But... back to the negatives again, I’m afraid.

The conveyor belt battle looks and feels just like something out of a platform game... which makes me cynical about why it was even included in the movie... and the comedy shenanigans of C3PO are just beyond irritating in this one. Great gags in themselves but, seriously, inappropriate in the context of the scenes they are in, in my humble opinion. Also, there’s a real false note where Natalie Portman falls out of a transport and looks like she’s been really hurt and then, when someone asks if she’s okay, she just gets up and gets on with things... it doesn’t quite scan right. You have a watch and let me know if you agree with me please.

And then there’s the music. The beloved John Williams scores another epic Star Wars movie but... this one doesn’t seem quite right in a lot of places. Don’t get me wrong, there’s some memorable scoring in this one but, throughout the movie, it just felt like a load of action cues from The Phantom Menace were literally being chopped up and then just needle-dropped onto the soundtrack rather than have a new score composed in several places. I’m wondering if Williams wrote some stuff which was rejected and then replaced with temp or, possibly, if the action sequences in certain areas kept getting recut to buggery and he just didn’t have time to keep changing them. Either way, certain musical sequences just seem a bit choppy and clumsy to me. Still, you can’t top Johnny Williams scoring a Star Wars movie so maybe the story will come out on this one in a few decades... who knows?

And that’s about it for this one. There’s a certain something which really doesn’t make sense in the whole Star Wars timeline in this one, due to C3PO and R2D2 being present on Owen and Beru Lars moisture farm on Tatooine, but I’ll point that out in the next two reviews, when I rewatch them. For now, let me just say that, any Star Wars film is going to be something you’re probably going to get something out of. For me, Attack Of The Clones is my least favourite of the lot and I think newcomers to the trilogy should never try and start on this series with this as a jumping on point. Make sure you watch them in the chronological order on which they were released or, if you want to do it the other way round, make sure you start with The Phantom Menace first... just cut Attack Of The Clones some slack when you watch it. They’re not all like this one.