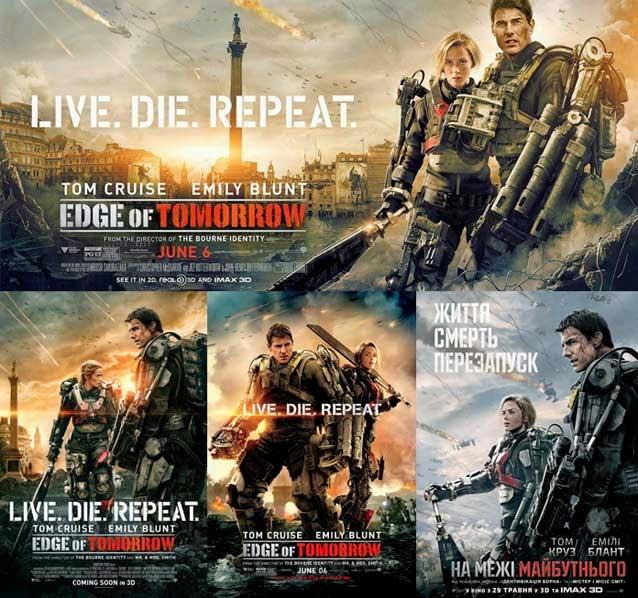 All You Need Is Kill

Edge Of Tomorrow is one of those movies of recent years wherein the main concept seem to harken back to the kinds of science fiction stories being written in the 1930s - 1950s period. It’s easily something which could have come from the mind of Philip K. Dick and others of his ilk, and probably did on more than one occasion, but in this instance it’s also an adaptation of a 2004 science fiction novel by Hiroshi Sakurazaka called All You Need Is Kill and that was the original working title of this film while it was being made and reported about on all the usual movie news outlets for a while.

All You Need Is Kill is, of course, one of the best titles for a story ever... so it was with much irritation that I learned that the title had been “modified” by Hollywood to the less than edgy... um... Edge Of Tomorrow. Now, frankly, this is this film’s one big mistake, as far as I’m concerned. Anybody in their right minds would go see a movie with a cool title like All You Need Is Kill and, frankly, the inherent pun on The Beatles song is a great metaphor for the true nature of this film... Edge Of Tomorrow is an okayish title, I guess, but... it’s just okay. Why the powers that be would turn their backs on such a strong title which essentially boiled things down to the essence of the story is beyond me and is something I really can’t forgive them for, to be honest.

However, if you’ve been paying attention to what I’ve been saying here up until now, you’ll have caught that I said this is the movie’s one big mistake... and that holds true. Title aside, the movie actually delivers a big budget style science fiction thrill ride which actually doesn’t, really, cop out at the end in the same way like films such as, for instance, last year’s Tom Cruise sci-fi movie Oblivion did in the final reels (my review of that good looking but ultimately disappointing film is here...). What we have here is basically, and I’m sure you’ll hear this opinion in pretty much every review of the movie you’ll read, watch or listen to, is basically a big Humans Vs Aliens war story remake of the beloved romantic comedy by Harold Ramis called Groundhog Day. The central premise of All You Need... err... sorry... Edge Of Tomorrow, is that we have a fairly unlikeable officer who’s thrown in with the troops against his will and walks, well drops anyway, into a massacre where he and all his new soldier colleagues quickly die.

And he does die.

However, ten minutes or so into the movie, he comes back to life to relive that day over again and, just like Bill Murray did in Groundhog Day, Tom Cruises character Cage is forced to change his actions and work with military poster girl Rita, The Angel Of Verdun (as played beautifully by Emily Blunt) for the 24 hours or so he has before he’s killed again, to get further into what leads to his ultimate fate. Sorry to sound a little cryptic there but, so far I’ve only told you what you can already glean from the trailers and I don’t want to spoil the movie’s central premise for you. What I can say is that the particular concept the writer has for the time travel/reset button going on here is, for once in a Hollywood movie, logically sound... a little preposterous and silly, to be sure, but certainly not something they manage to make mistakes with like the writers of, say, Back To The Future Part 2 or X-Men: Days Of Future Past did (and you can read my review of that disaster here...). Of course, the fact that they have the always watchable and believable Noah Taylor pitching the premise really helps you suspend your disbelief and it makes swallowing this particular pseudo-science pill fairly sweet.

The film is great to look at, slickly edited, has a nicely appropriate score by Christophe Beck, which often holds its own against the cacophony of the sound mix, and good performances all around. The film shows the grittiness of war but it also shows it beautifully photographed and designed so, bit of a mixed message there but, hey, go with it... it’s pretty to look at and eye candy always helps.

Talking of eye candy, Emily Blunt is astounding as always and Tom Cruise... well it always puzzles me why such a great actor sometimes makes the kind of career calls he does but, that’s none of my business, he’s a great actor and always likeable... and since he’s so likeable, it’s amazing seeing him playing the “against type” version of his character at the start of the film. He makes that work really well and its interesting comparing the character at the start and end of the movie, where he has become a better human being due to the multiple choices he’s made throughout the hundreds of times he’s been living the same day, or more (no spoilers), during the movie. So both the leads do a great job here... as does pretty much everybody else, I’m glad to say.

Now, the film is repetitive, to be sure, and that’s absolutely in keeping with the premise. Due to this, I’m not sure this is the kind of film I could watch for multiple viewings but, first time around, it’s entertaining because, for a while, you’re trying to solve the mystery of the lead character’s constant resets and then, when you know the explanation for this, you have a new “mission” to get involved with the characters on. And it works really well. As I said, I’m not sure I could watch it too often but I’m just pleased when a movie like this, and it seems to be the exception rather than the rule these days, actually lives up to the promise of the trailer and if you are in any way into science fiction... or big guns with a military feel... then you should absolutely go and see this movie. You’re bound to have a good time with it. Personally, I can’t wait to grab the blu ray of this one for my dad because I know he loves Groundhog Day and he also loves science fiction movies and Tom Cruise... so this one should keep him happy for a while.

In conclusion then, Edge Of Tomorrow has surprisingly few weaknesses... although you’ll probably figure out what the ultimate ending is going to be once you’ve got your head around the premise... which allows for such things. Even so, the ending doesn’t feel like a cheat. It’s all, as I say, catered for as a possibility within the central concept, so I really can’t find fault with it. Even the alien creature effects and the way they move is all done pretty well... which doesn’t always follow in these kinds of movies. It’s a great little science fiction film that I think all the cast and crew can be proud of... I don’t know how it fares as an adaptation of the novel because I haven’t read that yet, but certainly as summer action/fantasy escapist fare, it’s one of the better ones you’re going to see this year. Check it out while you can, is my advice.
Posted by NUTS4R2 at 09:48