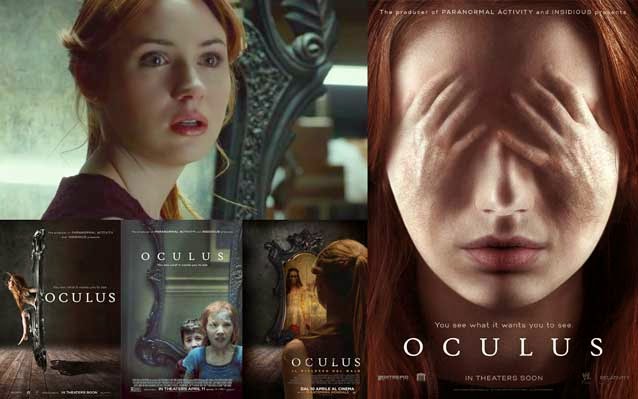 When I first sat down to write this review, I was going to call it Bin-Oculus... but then I decided I couldn’t be so mean spirited to something where the director, cast and crew have obviously all worked very hard on a genre tale which is, at the very least, quite competently put together... a hell of a lot more than some of the ones I’ve seen over the years, I can assure you. However, having let this film lay in my memory overnight I have to come to the sobering conclusion that, while Oculus certainly isn’t a terrible movie.... it’s not exactly a classic either.

The film is based on a short horror movie by the same director called Oculus: Chapter 3 - The Man With The Plan and, although I haven’t seen that earlier film myself, I’m guessing that the subject matter, and the way the story is spun out, probably carries a lot more impact in its original Twilight Zone sized format than it does expanded out to a feature. In many ways, that’s the film’s main problem, which I think the writer/director probably recognised very early on and is what gives the film its specific structure... but I’ll get to that in a minute.

There are some good things about this movie. Karen Gillan is one of them.

She is and always has been, the person you look at when she is on screen. To say this lady has some screen presence is a massive understatement and she is a big positive for any film or TV show she is in. In this case, though, that doesn’t matter because, frankly, all the performances are pretty good, including the child actor and actress who play the brother and sister leads for half the movie in the back story. And if the prospect of having the aforementioned Doctor Who actress in the movie isn’t enough to get any sci-fi fan’s pulse racing, we have the added attraction here of Katee Sackhoff, Starbuck in the rebooted Battlestar Galactica TV show, playing her mum. So this is all good stuff.

And, to be honest, the central concept of a haunted mirror which causes madness, death and destruction to the owners of any house in which it resides is also a good one. I think, as I said earlier, the structure of this one is a problem in some ways... not that the director's solution isn’t a good one, I just don’t think it worked too well here in terms of scares. A bit of a wasted concept.

It’s a story of two halves, you see. Being both a contemporary story of siblings Kaylie (Karen Gillan) and Tim (Brenton Thwaites), who are trying to end the mirror because of what it has done to them in the past, and the story of that past with their younger selves played by Annalise Basso and Garrett Ryan. Rather than play out as two separate elements, since they are obviously both lengthy sections, the director wisely decides to cross-cut between the two which also, of course, gives him the added bonus of highlighting things happening in one time zone with things happening in the other, as seen in contrast to each other. Which also gives him the obvious option of bleeding each reality into the other and he grasps that opportunity with both hands and utilises it in an attempt to manipulate the audience’s emotions. However, at least in terms of this disappointed audience member, in that last thing he fails to some considerable degree.

I know this because, throughout the whole movie, I didn’t find this one scary. I was expecting to get a taut, white knuckle ride of emotional jumps out of this film... which a lot of the modern ghost stories seem to be getting much better at, in my opinion. However, I knew this one wasn’t pulling me in like it was supposed to because I wasn’t getting that concerned about any of the central protagonists and I even, and this is really annoying, found myself checking the time three quarters of the way through to find out when this one was going to end. Not good.

I think one of the reasons this thing maybe isn’t working, aside from the structure meaning it takes a long time to get on with things, is due to two other elements.

One of these is that the film is just too damn predictable. It telegraphs the ending of one of the characters, for example, within the first 20 minutes or so of the opening of the film. That is to say, one of the characters sets a kill switch, a sure fire way of ending the mirror should things get too out of control. Which is kinda nice but, frankly, anyone who hasn’t figured out that at least one person is going to fall victim to the trap hasn’t watched enough movies in their lifetime. It’s pretty obvious what’s going to happen at the end of the movie and the only thing you really have to worry about, or not in my case, is just who is going to “get it” by being snared in their own trap.

It’s not all, completely predictable, though. Just mostly. The structure becomes quite freeform due to the rules set up in the movie by the “ghostly properties” of the mirror and there’s one sequence where a certain thing, involving a pet dog, is used to set up audience expectation which it then refutes... except, oh no it doesn’t, you just share the confused perception of the characters, as it turns out... so you might, as I was, feel a little bit cheated by the off screen nature of that particular reveal, or lack of reveal in this case.

Which leads me to why I really couldn’t care less what was going on in the movie after a certain point, even with some fantastic portrayals by the actors and actresses involved. And it is this...

At a certain point in the movie, fairly early on, we are taught, along with the main protagonists, that the reality of the movie is not necessarily how we are perceiving it at any one time. That physical laws are unstable and subject to change because anybody in the film could be hallucinating anything that’s going on, including their physical location. This means, basically, the film can do whatever it wants and lie to us visually as much as it likes... but it doesn’t matter what it does because there is no consequence to anything we are seeing. What will be will be... regardless of what reality we think we are experiencing. This, of course, has the effect of taking the sting out of the tail of the film... the movie can do what it wants to with the characters and it doesn’t have any influence on their ultimate fate... so, naturally, you stop caring about them and having a stake in their survival. What you’re seeing at any one time could always just be the mirror lying to you... so what does it matter? It felt like the horror element of the story got de-toothed long before it had properly started... so I had no investment in the way the images and sounds were presented to me... they were just something washing past my retina which didn’t really mean much.

However, having said all that, the film is generally nice to look at, with some smoothly flowing camerawork and some nice visual ideas. The introduction of Karen Gillan’s grown up version of Kaylie, for instance, which focuses on the movement of her big, red pony tail, made me smile in delight as I watched the movie. A predictable little sequence involving a light bulb and an apple is, similarly, well executed. And the score too, by The Newton Brothers, is nicely done as an appropriate but, quite typical, example of modern scoring for the horror genre. So that’s all good and I’ve got the CD on in the background as I write this review.

That being said, I really can’t find a lot of really good things to say about this movie and, my moans about structure and visual trickery aside, I really can’t say much of anything too bad about it either... except that on a “scary horror movie” level, for me it just doesn’t really work that well. Can’t say I could recommend it for fans of the horror genre but I can recommend it for anyone interested in following Karen Gillan’s post Doctor Who career because, as I’d expected, she does a great job in this movie and they should put her in a lot more of them, methinks. Also, the concept itself isn’t bad and the director/joint writer may be one to keep an eye out for in the future... we might see some seriously good stuff from him before long, methinks. All in all, though, I have to say I had a bit of a dull time with Oculus and I’m not expecting to watch it again in the future, to be honest.