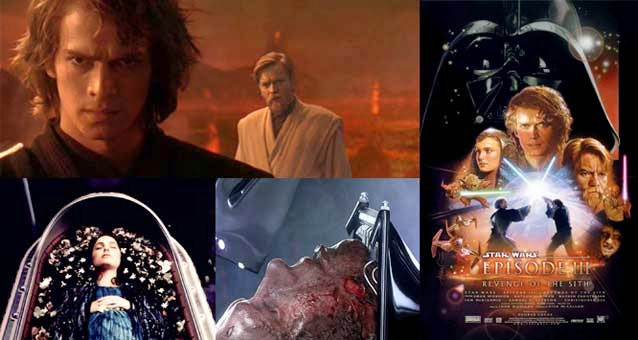 Okay, so after being more than pleased with the first of the prequel films, The Phantom Menace (reviewed here) my faith in Lucas was shaken again, what with his continual meddling with the original trilogy prints and the nightmare when Attack Of The Clones was released into cinemas (my review of that one here). The sluggish pacing of the previous film meant that I wasn’t getting too excited about what we’d get in Revenge Of The Sith but I remember that I had a much better reaction to it at the time. There were some bits which didn’t quite make sense, and they still don’t (yeah, I’ll get to it later on in this review), but overall I originally had a good time with it.

Revisiting the movie now on blu ray, I have to say that my appreciation of this one has soured a little over the years and I’m not nearly as enthusiastic as I once was about this chapter in the Star Wars saga. The action sequences are spectacular, it has to be said, but also quite boring in their choreography and I did find myself slipping into lethargy this time around. The action sequences in Attack Of The Clones were much better but, having said that, the pacing in Revenge Of The Sith beats the prior episode hands down, so overall I’d have to say Attack Of The Clones is still my least favourite Star Wars movie, with this one running it a close second.

That being said, there are still some good things about it. Hayden Christensen, at least in the early scenes of the film, seems a lot more confident and really begins to inhabit the role of Anakin Skywalker, probably due to the fact that the dialogue seems less clumsy than it did in the previous movie. That being said, there still seems to be something a little bit “flipped switch” about Anakin’s fall to the dark side. I know George Lucas has been alluding to it and putting in necessary shading in the previous two films but somehow, even after the slaughter of the Tusken Raider colony in Attack Of The Clones, it still seems like a bit of a leap to me, when Anakin suddenly becomes Palpatine’s follower. Remember, he’d just got Samuel Jackson’s character Mace Windu involved to take care of Palpatine and then, all of a sudden, he’s slicing off Windu’s arm and letting Palpatine chuck the geezah out of a window. And then he’s off to slaughter Jedi.... it seems a bit much to me but, having said that, there could be good reasons for this.

Reason number 1 is... it’s hard to retrofit a series of movies to take place before a set of pre-existing movies and get them to match up (no matter how much you tinker with them and destroy everyone’s fondest childhood memories in the process) and get it absolutely perfect... even though Lucas had some elements of the basic plotline for the back story in place decades before. I know he did have at least some of it figured out because I can remember back as far as 1978, after the very first movie was released at the end of 1977 in the UK (when it was literally just called Star Wars), that I’d talk to my friends about the epic battle between Obi Wan Kenobi and his apprentice by the side of a volcanic pit, where Darth Vader fell in and had to be moved into some kind of iron lung. This movie pretty much has a variant of that scenario in it so, even then, he knew what he was doing. There’s always going to be some kind of inconsistency or lack of logic to it somewhere and, well, like I said... I’ll get to those in a while.

Reason number 2, from what I understand about this picture, is this. The first cut Lucas arrived at ran for four hours. Now, even with the initial rescue of Palpatine originally lasting for over an hour, apparently, that’s still a lot of extra on the 2 hours and 20 minutes running time that got excluded from the cinema and home video versions. This means that there could have been all kinds of subtle signals that Anakin was finally tipping over as a prelude to the actual act itself which may have been cut out. I say could, since I don’t actually know... but it might be that Lucas was trying to fix some other problems with the final cut and the elimination of those problems created the lack of subtlety we see in the final release prints. That kind of thing does tend to happen more and more in the editing room these days, from what I can see from a lot of modern cinema. Mistakes and so forth creep in due to decisions made in the edit. It happens. So I’m letting both George Lucas and Hayden Christensen off the hook on this one... Lucas may not have been standing far enough back from the last cut to be able to glean that he’d lost that element of subtlety.

Let’s balance that out with another plus, then. Ewan McGregor as a more mature Obi Wan Kenobi, 15-120 years before he turns into Alec Guinness, really goes for it with this one and succeeds perfectly. Each of his three performances have, of course, had shades of the Guinness personae in them but this one brings it up to near what Guinness was doing in the original trilogy. Perfect job here from McGregor, I have to say. In fact, most of the performances in this one are spot on. Threepio is also a lot less irritating here... so that’s a blessing.

The music is a lot less choppier too. There are, to be fair, a couple of moments when it sounds like stuff has just been tracked in from The Phantom Menace instead of being re-recorded but, mostly, the music is pretty solid. Not particularly as memorable as... well, any of the other Star Wars films, to be fair, but at least it holds its own against the intergalactic hubbub with a certain dignity and originality... so happy about that.

And there’s that great moment where we see Bail Organa, Yoda and Obi Wan walking the famous corridors that the rebels were defending at the start of the very first Star Wars movie, revised to A New Hope around about the 1978 re-release (contrary to popular belief) and which now, of course, chronologically follows on from the events of the first film. There’s also a nice shot where we see a younger version of Peter Cushing’s character from that same film, Grand Moff Tarkin... but, alas, that scene has problems all it’s own.

So let’s get to the problems with this one, shall we?

Well, asides from a clunky bit of dialogue which really needed the scene originally shot for it to be inserted either at the same point or, preferably, an earlier point in the movie, where Yoda tells Obi Wan that Qui Gon is back from the dead... most of the problems occur when trying to match this movie up to the next film and there are basically two main things I have a problem with here...

Number one is the scene with Grand Moff Tarkin in it. They are looking at the rough frame of their new construction project, the very first Death Star. This is the one that Luke destroys in the next/first movie which is said to be the first time the weapon is revealed and fully operational. Except... hold on a minute... we know from the chronology of the events in The Empire Strikes Back and Return Of The Jedi that, after the destruction of the first Death Star, the second one could have only taken three and a half years to construct. Bearing in mind that Luke and Lei are somewhere between 16 and 20 years old in A New Hope, that means it takes 16-20 years to build the first Death Star? Even though they already have it half built at the end of Revenge Of The Sith? Seriously? C’mon guys. I mean, I know the first one would have taken a lot longer to build and, you know, to quote Kevin Smith “You think the average Stormtrooper knows how to install a toilet main? All they know is killing and white uniforms.” But, even so... 16 - 20 years. This stretches my ability to suspend my disbelief a little bit, to be honest.

The other problem I have is Luke’s “Uncle” Owen Lars and “Aunt Beru”. They look great in this and the previous movie as younger versions of the actors who played them in the original and, yes, I know Threepio’s memory is wiped so he doesn’t know them anymore but, honestly? You’d think after all the trouble they had when Darth Vader’s mum married Owen’s father and was killed by sandpeople, not to mention the fact that Threepio was Annakin’s droid and had been staying with them for, what, 15 years, that the minute these two saw Threepio again in A New Hope they would have junked him straight away and gone and hid somewhere. Not, presumably... “Oh, remember that robot who’s maker turned out to be the ruthless villain holding the galaxy in a stranglehold of terror... well he’s turned up in Luke's garage. Neat, huh? Better have it’s memory flushed, just in case.” I’m sorry but that’s just not appropriate. I know droids are seen as a lowly “life” form in the Star Wars universe but, seriously, this is basically Darth Vader’s other, mechanical, son. So I’m afraid this was a mistake I saw coming from a long way off, just after The Phantom Menace was released and, though I was trying to trust George Lucas on fixing this problem somehow... he just didn’t. Bit of a blow this one.

Still, an enjoyable film, if not a great one, albeit with some grizzly images which are maybe not totally appropriate for the rating, truth be told. A brave attempt but now with this trilogy back under my belt, it’s time to rewatch the original trilogy on blu ray. I’ll let you know how that goes real soon.