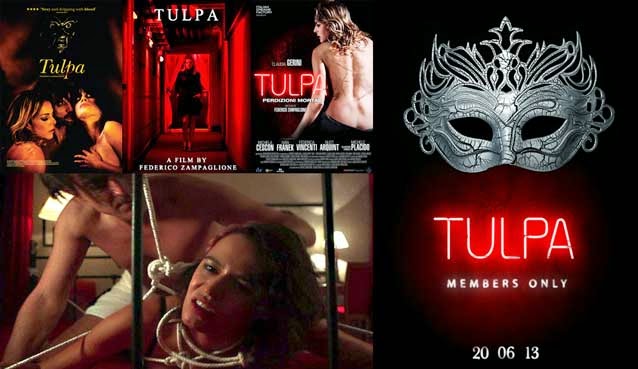 I’ve been wanting to see Tulpa for a while now. Giallo films have been all the rage again since the dawn of the DVD era, when multiregion machines have made Euro-horror, Gialli, Spaghetti Westerns etc accessible in countries like the US and here in England, where they may not have been so easily available before... especially in an uncut form.

Giallo movies are often mistaken by genre fans as horror films for some reason. They’re not and it seems to me to be a case of people either mistaking films about serial killers to be anything other than a thriller... or writers wanting to include some of their favourite giallo movies in books they’re writing about horror. However, for horror to work, you need an inhuman monster element (science created/mutation/black magic etc) or some form of supernatural threat like a ghost story. Most gialli have neither of these elements and they’re often not even scary... however there have been a couple notable exceptions.

Dario Argento’s fifth feature Deep Red (Profondo Rosso) for example, is an out and out giallo. However, the spate of killings that is initially perpetuated throughout that movie is actually caused by the supernatural foresight of the clairvoyant victim and the need to keep her silence. This supernatural element is used purely for that introduction into the story, to set in motion a specific chain of events and I can’t quite remember, off the top of my head, any other classic giallo which uses the genuine supernatural as a prelude to its main course like this one... although I'm sure there must be others which have slipped my mind.

There is, however, a famous red herring of a giallo movie by Sergio Martino called All The Colours Of The Dark (Tutti I Colori Del Buio) and that’s definitely a film which hides behind a supernatural setting and uses the language of horror films all the way through the movie until, at the eleventh hour, it’s revealed that... actually... no supernatural events have occurred after all and it was all very much a case of humans killing humans, like an old Scooby Doo cartoon ending. So very much a giallo and not a horror movie.

Tulpa, however, is definitely a modern giallo, or neo-giallo if you like, that carries on the tradition of the giallo films of the late sixties and onwards, but also adds a little hint of the supernatural into the mix at one point... but, again, although the significance of this moment is quite a high stakes one in terms of the denouement of the movie, it’s not an element which turns this into a horror film and Tulpa stays very much in the giallo camp in terms of... well... all the usual trappings actually. Trappings which are being lovingly homaged in this recent movie which, unbelievably, given the popularity of the form at the moment, has not had any release in either the UK or the US, at the time of writing this review (I eventually bit the bullet and bought a special limited edition German multi-disc set and I’m glad I did, actually).

Now there has been a definite upsurge in movies imitating the giallo style and, in some cases such as Berberian Sound Studio (reviewed here), films which say they are trying to be giallo but are actually more using the language of Euro-horror rather than the specific form of the giallo genre. It’s become a popular genre again among the humble cineastes who scavenge and forage for rare scraps at the various Film Conventions throughout the land... and that’s why we are getting films like Last Caress (aka Glam Gore) popping up in the market, which also hasn’t had a UK release at time of writing and which was reviewed by me a couple of years ago here.

Probably the collaboration of Hélène Cattet and Bruno Forzani, with their brilliant movies Amer (reviewed here) and The Strange Colour Of Your Body’s Tears (reviewed here) are the leading exponents in the use of, at least, the visual and aural style of the giallo in modern film-making. Amer perfectly uses the style of the giallo to weave a puzzling narrative triptych of observations about a common central protagonist at various stages of her life but, although the stylistic traits of the movie are pure giallo, the film is more an exploration in surrealism. The Strange Colour Of Your Body’s Tears is similarly a study in surrealism but, in addition to using giallo signatures in the work, the opening narrative thread is also a gialloistic concoction (whoops, made a word up there) and it’s even closer to the form... while still being a million miles away on some level.

Although Tulpa isn’t as spectacular as either of these two examples, it’s certainly a lot closer in style to giallo in terms of the story structure and I know a few of my friends would probably prefer it over the two examples I just cited (although personally I am swept off my feet by Cattet and Forzani’s works of cinematic art).

And then the typical giallo killer steps in.

And by typical, I mean just that... a dark figure in a mask, raincoat, hat and black gloves who stabs and slices into the guy before he has a chance to properly start up with his lover. After the killer has split him apart with one of many knife wounds (one of which, passing up through the chin, mirrors a similar moment in Argento’s Opera, if i’m not mistaken), the man’s genitals are sliced off and left in front of his lover who is still firmly secured to the bed. The woman is left alone by the killer... or at least that’s what’s implied.

Then we have the opening credits seaquence, comprising a series of typical establishing shots of a city in Italy (probably Rome?) which are all shot in fairly neutral colours. On one of the shots we pan down the front of a tall building and focus on a girl jogging. After this shot, all of the establishing montage features shots of her running against the city locations and we know from the end of this sequence that she is the main protagonist of this movie... Lisa, played by Claudia Gerini. After we follow her into a few scenes at work, witness a few more murders and also some sex scenes in the secret sex club, Tulpa, in which she spends some of her downtime, it becomes clear that all the scenes set in the club or involving the murderer, are lit in the brightly coloured and richer tones of a classic giallo in contrast to the “everyday life” shots which, though still shot quite cleanly and beautifully, are more neutral in tone. This, of course, makes the neon tinted, colour saturated tones of the movie’s underworld a much more palatable confection to the viewer and enhances the scenes of sex and murder in an almost subconsciously enticing manner. It’s like the colour schemes of two specific Dario Argento movies, Suspiria and Tenebrae, have been rubbed against each other and the resulting design style is Tulpa.

The fact that we first see Claudia Gerini’s character jogging is useful in her set up because that demonstrates to us, in no uncertain terms, that she is not out of shape and can run if required... a character trait we’ll later see in action when she is chased from the sex club by a female bodybuilder wielding a samurai sword. So the jogging isn’t gratuitous eye candy (although a lot of the movie surely is... and why not?) since this kind of thing clues us in that her character is not just a sedentary office worker and she can put some speed on if required.

As is typical in a giallo thriller, a lot of the murders are either quite spectacular or quite imaginative and Tulpa rarely fails to live up to the expectations created by the history of its genre. For example, a scene where a woman is securely fastened to an old fashioned carousel with passes by a strategically placed piece of barbed wire is a devious concoction for fans of blood and gore, as her face gets gradually and bloodily whittled down each time she passes it... until her left eyeball rolls onto the floor. When she comes to a ‘dead’ stop, her blood drips down onto her own eyeball. Warped but imaginative stuff for the demanding audience.

What is less typical of the genre is that the movie doesn’t incorporate a large element of the police procedural investigation that you would expect to see in these kinds of scenarios. Indeed, the police are relegated to a brief appearance at the end of the movie and are completely out of the narrative for pretty much all of the film. Instead, Lisa becomes our central Nancy Drew character in a solo adventure, which is fitting since, as the film slowly reveals its nature, you realise that there may be some link to her which is behind the recent spate of murders.

I’m not going to tell you what really is going on here, in the interests of not wanting to spoil it for my readers. Suffice it to say that, another way in which the film follows in the footsteps of its predecessors, is in the ability to set up suspects and red herrings and then lead you on to try and solve the mystery when it could be almost anyone behind the killings. One particularly good red herring plays into the supernatural element. A Tulpa is a Tibetan manifestation or spirit person/demon ritualistically created out of the ether by someone. The way in which it manifests in this movie is fairly handy, actually, and the red herring comes in your expectations of this element... which are set up in the last act. That being said, most regular giallo watchers will probably realise the total insignificance of introducing a concept like this into a film of this nature by this point in the narrative. The Tulpa element does turn up, though... just not in the way you might imagine it would.

Adding to all this is a pretty great score by Andrea Moscianese, Federico Zampaglione and Francesco Zampaglione. It’s very much got a modern horror, sound design element to it but it’s mostly channeling the sound of the giallo, specifically using the Goblin stuff as a starting point for the rhythm, percussion and guitars... perhaps even more specifically it’s not a million miles away from Goblin’s last score for Argento’s Sleepless in its tone. Whatever the specific inspiration is, though, it works really well and it’s been hanging around as an earworm a lot for the past few days.

Tulpa - Perdizioni Mortali is a pretty great neo-giallo, it has to be said. I think the disappointment coming from a lot of reviewers of this movie may actually stem from a lack of sympathy or understanding of the original material which a film like this references as part of its genetic make-up. However, if giallo is your thing, then you’re probably going to recognise Tulpa for what it is, a very well executed modern take on the genre. If you’re expecting something else then you might be less sympathetic to the simplicity of the set up and the stylistic flourishes peculiar to the genre, to be sure. For me, though, this was a great little film and one I’ll be coming back to some day.

For my beginner’s guide to the giallo genre, check out my article Giallo Fever by clicking here.
Posted by NUTS4R2 at 19:33