Doc Savage - The Man Of Bronze 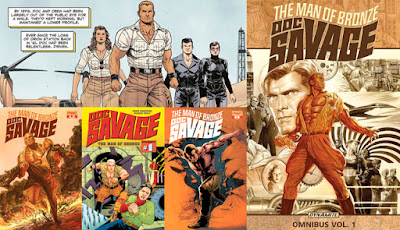 
Regular readers of this site will know of my absolute devotion to Doc Savage - a character I first stumbled upon back in 1975 via the release of the George Pal produced movie Doc Savage: The Man Of Bronze... starring Ron Ely, the guy I used to watch as Tarzan on TV, in the titular role. A lot of people didn't like the movie, for some reason... possibly because the old style, tongue-in-cheek bow to the cliffhanger serials of days gone by were not that popular at the time. Fans of the original 182 stories were particularly outspoken in terms of the attitudes explored in the film but, really, there's a big difference between being gently playful with a genre while still showing respect to the things that make it work... and out and out ridicule.... and it was very clear to me that the movie was actually put together with a lot of love for the character.

As for myself, I loved the film and, because of it, I started reading through as many of the Kenneth Robeson novels as I could possibly find. Since they are so hard to get hold of, and since he wrote one a month for a 16 year period, I am getting to the age now where I have to come to terms with the fact that it's probably an endeavour I'll never get to finish before I die. There were also new novels written over the years by Philip Jose Farmer and Will Murray and I've tried to read each of these within a year of publication. If you look in the book section of the index, you'll find a fair few of the Murray ones have been reviewed by me here.

And then there were the comics. Various companies have tried doing Doc Savage over the years and I've usually been there to read them. Very recently I acquired, through ebay, one of my Doc Savage grails, the one off comic that Gold Key put out in 1966 based on an ultimately unfilmed screenplay which was supposed to star Chuck Connors as Doc. Marvel put out two very impressive runs in the early to mid seventies and these are probably my favourites. It's sad that both runs only lasted eight issues a piece. There was the full colour run which adapted four of the original Robeson novels, two issues a piece, and then there was a truly amazing set of magazine sized, black and white stories of brand new adventures, following the trend set by Marvel with similar "magazines" such as Savage Sword Of Conan - the stories were an appropriate combination of the fantastical and the scientific and the artwork was, frankly, some of the best I’ve seen in comic books.

Lots of other comic companies have had a crack at Doc and his crew over the years. DC had a go in the 1980s where they tried to do something different with the character but the results were ultimately not great. Millennium did a great run of miniseries which were pretty cool. DC tried again, teaming up Doc with other of his contemporaries, including Batman, a couple of years ago. I read that one while
on holiday last year and the results were so bad I just couldn't bring myself to write a review of the disaster - I was pretty upset.

This latest eight issue miniseries from Dynamite is one I missed out on but which I discovered reprinted in this trade paperback, along with the ‘annual’ issue. After the recent disaster from DC, I have to admit I was expecting the worst. Now there are good things and bad things about this series but, ultimately, it's certainly not terrible and at least remains true to the spirit of the idea behind the central character. There are, perhaps, one or two mistakes but I've seen other writers make them too and I'll go into one of those in a little more detail later.

Over the years, a number of comic book writers have attempted to contemporise the Man of Bronze, taking him out of his true home in the 1930s and 1940s and bringing him up to date for the time the comic is written. It's definitely a mistake and I believe the character certainly needs his particular period of history to be able to function in the same way. To their credit, various writers usually find a way to physically displace Doc in time somehow... and it often involves the loss of his companions, The Amazing Five, somewhere along the line as a sacrifice to this updating process.

Another common tactic is to find a potential weak point in the character's past and pitch it into modern times and criticise it on the values of our age... and it's usually Doc's "crime college"' where he operates on the brains of captured criminals, erases their memories, rehabilitates them and gives them an honest trade which is the bone of contention picked out by modern writers. The moral dilemma, which is easy to identify from a contemporary viewpoint, is usually used to exploit the drama of Doc having to cope with the attitudes found in a brave new world.

This new version makes use of both of these strategies but, where other writers have failed to maintain the vitality and integrity of the central character, this series just about... only just... manages to make it work to some extent. Narrated from our time by a character we don't actually meet until near the end of the run, each issue takes place in a different time zone... starting off from the first issue set in the early 1930s and continuing in a different decade until we are brought bang up to date. It's a slow burn strategy which introduces the challenges faced by Doc over the advancing decades and it's an interesting spin on the character which, to be fair, humanises Doc a little more than usual but certainly does so in a way that seems appropriate to the obstacles in each new decade that Doc has to react to. However, it's not without emotional consequences for the die hard Doc Savage fan...

In this story, the writer uses the device of having a substance that can prolong life for everybody. Unfortunately... and as it would have to be in a fictional plot of this nature... the substance is lost in a scheme which I won't spoil by retelling here, but not before Doc and his cousin Pat Savage have imbibed themselves. Hence, Doc and Pat barely age throughout the series but, alas, The Amazing Five are not so fortunate and, consequently, only last a couple of issues before they are replaced by an ever expanding crew of helpers which sees Savage become, pretty much, a global corporation. This is a huge loss, of course, to fans of the original characters (as I am) but, fortunately, the credibility of the way in which the pressures to Doc are handled and come together as an almost single story arc spanning the eight decades, are enough to just about distract from and temper that loss.

There are a couple of things that I wasn't so admiring of. One of these is that certain elements of the plot seem almost ripped right out of the recent Kingsman - The Secret Service movie (reviewed here) - itself based on a comic book, although I haven't read that one myself so don't know if the things I'm thinking of are in the original source comic or not. I'm not saying either this version of Doc Savage or Kingsman stole some of their central ideas from each other, I believe it was probably just a coincidence... but the similarities are quite strong and definitely there.

The one thing I do find hard to forgive is a mistake based on either the writers not being familiar with the history of the character or, also a possibility, being something Chris Roberson chose to ignore for the sake of convenience... which is also something I didn't appreciate. In the first issue, set in 1933, presumably just before or after the very first Doc Savage story, and also compounded by Shannon Eric Denton in the annual, set three years even before that, Doc and his crew are seen using the famous mercy bullets designed to merely pierce the skin and leave the recipient unconscious from the drug that invades the bloodstream. However, as far as I remember, Doc's writer Lester Dent (working under the Street & Smith house name of Kenneth Robeson) didn't introduce that element into the series until he had a few stories under his belt. So Doc didn't invent the supermachine pistol with it’s famous bull-fiddle roar... or at least the mercy shells... until a little later. Now a case could be made, I suppose, that Chris Roberson is specifically trying to place this part of the story as being the first time the firearms were used but... there's absolutely no way we can excuse Denton's use of them in a story set in 1930. So I was a bit annoyed about that... to be honest.

These are, though, mild criticisms of this short run of comics and I'm pretty sure most fans of Clark Savage Jr will be able to jump on board with this series and appreciate the slightly darker shades of the character which were rarely touched upon in the original stories. The artwork is more than serviceable and the colours used throughout are subtle, sedate and keeping in tone with the ideas of the bronze adventurer and his journey through the years. There's also a nice reference to the Maxwell Grant character, The Shadow, at one point that brought a smile to my face. Not the best comic book version of the character we've seen over the decades but certainly not the worst of the “four colour incarnations” either and, as I said earlier, it doesn't stray too far from the spirit of the source and it explores areas you just couldn't easily work into the setting if it was still mired in the 1930s... although, personally, I would have preferred a tale set in the times of the original stories. Still, really not a bad crack at Doc and worth taking a look at if you are a fan of the originals. Have no fear... the man of bronze is still here.
Posted by NUTS4R2 at 19:38