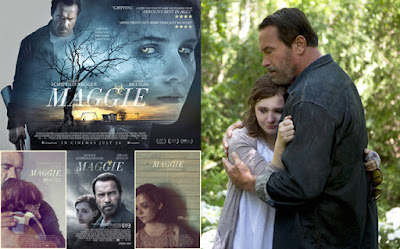 This is an amazing film.

I've probably made it abundantly clear in a few of my past reviews that I've long been a fan of Arnold Schwarzenneger. Not all of his films, for sure... he's made a fair few clunkers in his time and his choices of roles haven't always been something I'd want to see... but as a solid actor it’s hard not to appreciate him. I first saw him at the cinema in a film called Cactus Jack opposite Kirk Douglas, on a double bill with one of the Nicholas Hammond TV to movie versions of The Amazing Spider-Man. But it was when I went to the cinema a few years later to see him in the first release of Conan The Barbarian that I really took notice of who he was.

Now, to be fair, Schwarzenneger is probably best known as a personality... and I mean that in the best sense. He's a star and one of the few internationally recognised, larger than life actors who are famous for his on screen image. In this sense, he's the closest thing we've got to a modern John Wayne type, old Hollywood style actor. That being said, I think his likeable tough guy personae tends to overwhelm people’s perceptions of him and he's rarely given credit for what he actually is... a damn good actor. It helps to be a major star but his thespian skills are a heck of a lot better than people realise, I think.

Which is why I was so desperate to see his new film Maggie. Okay, so it's a zombie movie, granted, but it's a low budget zombie movie with a distinct lack of action... a genre Schwarzenneger is best known for, although there is a little action or implied action thrown into a couple of the sequences. There’s also not as much emphasis on horror as you might think... although there are a few very suspenseful moments where you will be in fear on behalf of either Schwarzenegger’s character Wade or his wife Caroline, played by Joely Richardson. However, this is more of an exploration of the dynamics of a family who know they are going to lose their daughter to the slowly decaying caress of a terminal and dangerous-to-others disease which is gradually turning her into a killer zombie, more than anything else.

The plot set up, such as it is, is really simple and certainly doesn't get any more complex as it continues... but this is not a bad thing especially and works pretty well for a small scale movie like this one. It shows us, right from the start, a world plunged into the middle of a zombie virus... although the zombies are not labelled with the 'Z' word here. To give them a little more credibility, perhaps, the victims of the virus are referred to as ‘necroambulists’, possibly as a nod to the most famous cinematic somnambulist of all time, Cesare, the sole occupant of The Cabinet Of Dr. Caligari. Like the variants in 28 Days Later and its sequel, these are not monsters who have come back from the dead but people who have succumbed to infection, via the bite of a another infected person. In all other ways, though, the human victims of the disease are being slowly reduced to the shambling counterparts popularised by George A Romero's early Living Dead movies.

In a way, the film could be likened to a drawn out version of the scene in Romero's original Dawn Of The Dead, where the friend who was bitten falls sick and then slowly dies... before popping back up as a zombie. The difference being that there's no death to zombie moment here... the victim becomes slowly more zombie-like and there's a slightly different kind of pay off at the end of this movie too.

Like the majority of zombie movies, the virus and its origins are a mystery and everyone just goes about their daily business living with, and adapting to, a world which imposes curfews on the streets and where you wait with your infected loved ones until the police come to take them to quarantine. In quarantine, they are thrown in with a load of similar, unfortunate people until they start eating each other and their 'wardens' can see that all trace of their former humanity is gone. Then they are given a drug to kill them which, for the dramatic purposes of this movie, is an extremely painful poison for your zombie stricken relatives to have to struggle through.

Schwarzenegger’s character, Wade, is first seen driving to a hospital compound to take Maggie away with him to his relatively isolated farm. The film becomes about making the most of the last days with his daughter and how to make the choice between letting the cops take his kin into quarantine, giving her the illegally acquired drug himself or, the more humane but difficult option, a swift bullet to the head to end her suffering so that she can't harm others. It’s a pretty bleak film, in many ways.

Schwarzenneger really shines in his heartfelt and dramatic performance here. I've heard some people say that this is his best performance in a movie and they might be right. Like I said, though, I've always thought of him as a good actor and I think what we're seeing here is a very small scale film (the lowest budget he's had since the first of The Terminator movies, which was pretty much a B-movie when it came out) and it allows his natural acting abilities to show through. He's not punching someone or driving at high speed through explosions and, as a consequence of that, some people are maybe just waking up to the fact that he's a very expressive actor and, even when he doesn't have a lot of lines, he can give a lot of emotion and inner monologue rendered as subtle facial expression. I'm hoping this movie will maybe stop straight jacketing him to mostly action roles. He's extremely good in this and people need to see it.

The other star of the show is, of course, the title character herself, played by Abigail Breslin. She does an a absolutely fantastic job in this and although a lot of that is supporting Schwarzenegger’s performance as her tragedy bound father, she is also amazing in the scenes she shares with fellow teenagers or with Joely Richardson as her cautious mother. The writer sets up the rules of the zombies particular to this film anecdotally from a couple of sources and some of the later, two hander scenes between Maggie and her mother or father are actually extremely suspenseful because the audience knows what signs to look out for. You will be on the edge of your seat to find out who she's going to take a bite out of first. It all gets very taut at certain points in the running time before heading towards what is actually a really charming ending to the movie, exploring the idea that sometimes, even if a person becomes a ravenous, flesh eating zombie, its possible for that creature to retain a certain sense of its essential humanity.

The film is shot with a kind of constantly moving, reactive camera which tends to focus on scenes where there is not a great deal of movement. Little jiggles to the camera with micro-movements to keep the image slightly shifting is what seems to be going on here. Almost like a found footage movie but on a much more subtle scale. I'm not the biggest fan of this technique but it does give the camera a slight feel of reacting to the characters and events on screen “as it happens” and I guess it's one way of building up a level of credibility with your key players. It's fashionable at the moment and I've seen it used a lot on TV in recent decades on shows such as Firefly and the rebooted Battlestar Galactica. It works really well here, though, and I didn't find it that distracting, I’m glad to say.

Director Hobson also tends to cut away to little details of the acting and away from the main action and I thought this technique worked pretty well the way he managed to pull it off here. So he will cut away to a close up shot of Schwarzenneger turning a key on his petrol tank, for example, or cut to his hand picking up a photograph and recording the detail there. It's good stuff and it certainly helps enhance/capture the subtleties of the wonderful cast in this film, all of whom are absolutely excellent, whether they are in a major or minor supporting role. And it's similarly enhanced by a fairly low key but incredibly moving score by David Wingo, which really does deserve to get a proper CD release rather than the stupid digital download it's currently been lumbered with.

And that's about it. A different film for some Schwarzenegger fans to have to adjust to and I really don't think it's been very well marketed, to be honest. In this country at least. I went to the opening evening showing at my local and they put it in the smallest screen they had. That was arguably a wise move on the part of the cinema I guess because, including me, there were a total of eleven people in the screening and around three of those walked out half way through. So not living up to people's expectations of an ‘Arnold Schwarzenneger movie’ for sure but, honestly, one of the most impressive films he's been involved with and I hope this movie will help potential directors and producers in Hollywoodland realise that he's capable of doing far more than what people have been used to seeing him do over the decades. Whether you're a fan of the actor or not, if you want to see a serious dramatic film about issues and emotions raised by the implications of a fictional zombie virus... this film is it. Maggie is a triumphant movie for all involved and, if you are a fan of the genre, then you certainly won't want to miss this one. Catch it soon, before it disappears as quickly as it came.
Posted by NUTS4R2 at 19:08