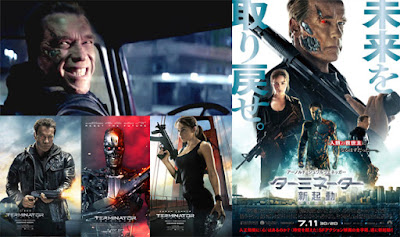 Pie In The Skynet

Well, I have to admit, I was expecting this movie to be a huge train wreck. Colour me surprised that, while it has some problems, Terminator Genisys was a really entertaining time at the movies and I’m really pleased about that.

I saw the original 1984 James Cameron film, The Terminator, between one and two years after it was released at cinemas, courtesy of a rental VHS tape from my local off-licence. I got to see it again on a big screen and in the right aspect ratio years later and, as such, it’s the only one of this series of movies, at time of writing this article, that I’ve seen twice. Although I’m thinking of getting a blu ray set if they release them all uncut towards the end of the year.

I loved that first movie at the time. It was obviously low budget and it was the kind of midnight movie style offering that made you wonder why they ever bothered to release it into cinemas in the first place. A B-movie exploitation film but a cool one... as far as I was concerned. When we all queued up a number of years later to see Cameron’s sequel, Terminator 2: Judgement Day, I was really disappointed with it and just didn’t have much good to say about it, in comparison to the origuinal. I preferred Terminator 3: Rise Of The Machines because it had a sexy lady Terminator and it had a Schwarzenegger tribute to the original Django movie in it... really enjoyed that aspect of it. The one I really liked was the fourth one, Terminator: Salvation, for some reason, which I enjoyed almost as much as the first movie.

This fifth movie is really starting off from a point which is, frankly, a load of nonsense. None of the same actors apart from Schwarzenegger are back and it’s something I criticised some of the other films for... if the same actors don’t want to come back... don’t make another movie. Simple. So right away you know it’s a ridiculous load of tosh and the story seems to be full of so many mistakes in the temporal logic of the thing, similar to the stupid errors in films like Back To The Future Part 2 and X-Men: Days Of Future Past (reviewed here), that you have to completely ignore any grounding in trying to make this a valid sequel to anything... so the main thing is to not take this movie in any way seriously and you should have a good time with it.

Yeah, I understand if I say it’s a “switch your brain off movie” it’s just validating the lack of attempt of film studios to make more robust and logical movies but, heck, I can only respond to what’s in front of me here. And I fully understand that my lack of remembrance of pretty much anything of the previous movies makes me unable to properly comment on any possible continuity problems in this chapter of the series. That being said, if something is changed in the past, you can’t just go back and sort it out from a future point because the future point of what you just changed no longer exists... that’s pretty much a no brainer. There’s lots of that kind of anti-logic in this one but, you know what, I’m just going to let it slide because it’s so self evident that I can’t imagine anyone not having a problem with it and you certainly don’t need me to point this stuff out.

However, what this film is... is a non-stop action movie. And it’s a well oiled machine of an action movie, at that. It isn’t confusing, keeps up the pacing (which is pretty much action crescendo all the way through... like the recent Mad Max: Fury Road, reviewed by me here) and has a great set of actors. In addition to the always underrated and always brilliant Arnold Schwarzenegger, we have Jason Clarke as John Connor, Emilia Clarke as Sarah Connor, Jai Courtney as Kyle Reese, Byung-Hun Lee as the Jason Patrick version of The Terminator (?), J. K. Simmons (playing slightly against type compared to what I’ve seen him do, though no less brilliantly) and the wonderful Matt Smith (in a not so visible but highly effective role). All more than capable actors, all doing a bang up job. So that’s all good, then.

The film is really well directed and Taylor keeps the camera moving a lot of the time. The rhythm of the editing is pretty neat (a scene where Schwarzenegger and Courtney are competing at ammunition loading springs to mind) and the lighting and colour palette seems to be pretty cool throughout and also helps stop things flagging on a visual level. There are some really cool sequences in terms of shot design and the way the editing works too...

For instance, there’s an amazing scene where we follow Jason Clark in profile as he walks through a load of vertical machinery like pipes, at speed, with the verticals rushing past to the right of shot as his character is walking towards the left of the screen... while he is kept in the middle of the shot via the moving camera viewpoint. Then the shot suddenly cuts to a pan of the same character continuing his walking... however, we see him from the front and we are panning in to him from the right... at exactly the same speed as the previous shot... which means the verticals rushing to the right are just continuing at the same pace, making it a completely seamless transition despite showing a completely different angle, because of the “visual glue” of the camera movement in relation to the foreground elements. Unbelievably cool and, although the two shots put together probably last less than 5 to 6 seconds, it just blew me away. The director completely won me over with these couple of shots.

Another great thing is the music. Now, apart from a couple of moments where literally just a few notes of the original Terminator theme are referenced, before being properly brought into play in the end credits suite (which plays like a new version of Brad Fiedel’s original) there aren't a lot of similarities to the thematic elements that have come before. However, Lorne Balfe’s score is robust and, like his score to The Sweeney (reviewed here) is an absolutely awesome and appropriate set of musical cues to accompany and enhance the emotions and dynamics of the movie. I felt myself admiring the music more and more as I got further into the film, which managed to thankfully hold its own in the sound mix during some of the fast and furious bullet ballets which the movie has on offer. This composer is definitely one of the "new guard" to watch out for, as far as I'm concerned... Taking his place among such modern soundtrack maestros as Alexandre Desplat, Michael Giachhino, Bear McCreary and Brian Tyler, as far as I'm concerned.

Ultimately, although there are some really big flaws in the thinking of certain elements - such as being able to grow new flesh which is designed to age and have it all blending in somehow - the film gets a lot of things right. True, there is a, presumably deliberately left, loose end in terms of just who or what sent the Schwarzenegger version of the Terminator nicknamed "pops" back to Sarah Connor’s childhood and there's a certain amount of predictability in terms of the ultimate fate of that version of the character (which will become obvious to you as soon as you see the interior of a certain interior set about half way through the movie) but the lack of logic and surprise doesn't mean an awful lot, bearing in mind that they throw it all away right from the start anyway. This film won't explain or fix any timeline issues of the previous movies but, at least, the audience can have some fun with the competency and creative flourishes inherent in the visual side. And, hey, there are some nice one liners in there too, which may make you smile. So, yeah, if you're into science fiction movies in general, Terminator Genisys is a flawed but fun picture to put on your "to watch" list. Not as good as the first or fourth installments but, yeah, it's definitely worth a watch and, I'm pretty sure after this one, Schwarzenegger will be back.
Posted by NUTS4R2 at 18:54