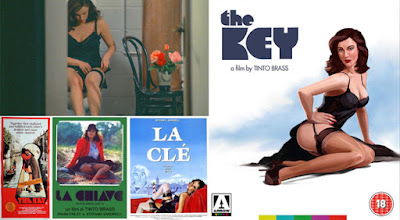 Um... I’d never seen a Tinto Brass movie until now. Not even the most notorious and famous of the films credited to him, Caligula... a favourite of the kids at my junior and senior school that used to change hands on uncut bootleg tapes in the playground. His stuff just never really appealed to me that much, to be honest. So why am I watching a movie which is probably not even one of the films he is most famous for, you might ask? Well, if you did ask that, I’d have to take you back to through the dim and distant, cobweb filled halls of my visual memory...

Back in 1985, when this 1983 film got a release over here in the UK, I used to walk to school past the Savoy ABC cinema. It was a one screen affair until, after Star Wars had dominated that screen for so many more months than you would think a film could, at the tail end of 1977 and more properly into 1978 over here, the cinema became a multi-screen affair. Cinema was incredibly popular again and so, on my way to and from school each day, I would walk past a number of posters for all kinds of shows (including one off midnight performances) and the whole gamut of family and children’s viewing was covered, as one of the same display of four posters where you’d see sleazy crime films, violent horror movies and British sex comedies (usually starring people like Mary Millington) on show next to them. I would have been 17 years old and I was still developing a healthy interest in my sexual desires... triggered by such actresses as Carrie Fisher in the Star Wars movies, Valerie Perrine in Superman The Movie, Caroline Munro in various fantasy classics and Farah Fawcett in Saturn 3. And one day, and for about two weeks, they had a poster up advertising The Key... and it stirred all the erotic rumblings within me.

Now, there was no way I was going to be able to attempt to penetrate the faulty age filter of the ticket lady in a way where my parents wouldn’t know where I was, so the poster and the odd black and white reproduction of the same in Time Out magazine was the only thing I had access to. It’s such a shame that I can’t find the same poster reproduced on the internet now because my memory is dim as to the details. All I remember now are vague recollections that it was landscape, was mostly black and a cut out of the actress I now know to be the great Stefania Sandrelli, wearing either nothing or black lingerie and lying down in a kind of foetal position. This is all I can remember of it now. If anyone can post a picture of this on twitter for me at some point, I’d be grateful... it’s not among the ones I could find to illustrate this review with at the top of the page.

So when I saw a new Arrow Blu Ray transfer on sale in Fopp records for the princely but relatively cheap sum of around £6, I figured I should finally put paid to my haunted memories of said poster and watch the film. I’m kinda glad I did because it was nothing like I thought it would be and it was quite interesting.

The Key is set in Italy during 1940 (in fact, it starts off on New Years Eve 1939) but although it’s quite obviously set against the political backdrop of the time, it doesn’t seem to make much use of the events then, mostly just as a bookend to the story within. I'm afraid to say that, if there is any metaphor inherent in the film, it was kind of lost on me (I know nothing of politics, I’m afraid).

The film tells the, almost but not quite convoluted, story of Sandrelli’s character Teresa Wolfe. Because of her modesty when it comes to letting her husband glimpse her nakedness, even when they are making love, she keeps her form fairly well hidden... for most of the first half an hour of the movie. It says something of the incredible acting talents of British actor Frank Finlay, as her husband Nino, that I went through the whole movie not knowing it was him and assuming it was being played by a seasoned Italian actor who was not known to me.

Very quickly it becomes apparent that Lazlo (played by Franco Branciaroli), their daughter’s boyfriend,  is sexually attracted to Teresa. Their daughter is called Lisa and is played by Barbara Cupisti, wearing a Princess Leia double bun hairstyle, from the first Star Wars film for a fair amount of the running time. When Nino quickly realises this burgeoning desire, he overcomes his inherent jealousy and plays on his suspicions of them to instigate their illicit relationship in order to hopefully overcome Teresa’s modesty and see her inner sexual flower bloom, which it does (and how), over the course of the movie. The husband and wife write diary extracts about their ongoing sexual obsession in the hopes that the other will read it when they deliberately make each one “accidentally” accessible and, while they both do indeed constantly read each other’s journals covertly, they are never, until certain events at the end of the movie, sure that the other is reading it.

This starts off with the husband, who is an art expert and owner of a hotel but who also gets cash by “authenticating” forgeries painted by his acquaintances, borrowing a camera from Lazlo so he can covertly take naked pictures of his wife. Since Lazlo is the only one who can develop the photos, it’s not long before all four of them know what he’s been up to but, it’s left unspoken of between Nino and Teresa and he continues the practice, also building the desire that Lazlo has for his wife and which culminates in an affair between the two of them, much to the dismay of the daughter, but to the Nino’s satisfaction since Teresa also starts to open up sexually to him. However, the interesting aspect of the film is that neither of the two principal characters seems completely sure who’s game they are playing.... their own or one set up by their spouse.

The audience to the drama also seems to be in a state of flux as to the controlling force at work here, since the voice over narrative is split between the inner thoughts of both Nino and Teresa at different stages of the movie... even opening out to include the internal monologue of Lazlo in one scene. This multiple viewpoint both gives more detail but hides full intent and while I was disappointed by the inclusion of this structure at first, I realised after a while that it’s not being used in the cliché way you might expect and, instead, is used as another layer of audience exploration into the heart of the narrative without being too complicit in spoon feeding a specific, cut and dried viewpoint and, much to my pleasure, any kind of moral judgement on any of the characters in the film.

The director uses elegant but not overly flashily designed compositions although he does seem to make use of the old Roger Corman trick of “leaving the door open”. That is to say, he likes to give his shots more depth by showing things happening in the background or in little frame or openings within but at a distance form the main subject of the shot. So he will leave a door open into another set to show different things going on in another room while he is focussing on the actions of his main dramatic subject in the majority of the shot... often using mirrors to do this, as in a wonderful shot of two lovers on a bed being reflected at the camera in an elliptical mirror, which includes a similar mirror being reflected back above their heads. A nice thing to do.

The film is partially a bitter sweet tragedy in that, by losing her inhibitions and becoming a more healthily expressive sexual creature... Teresa learns that their can be fatal consequences to others as a result of her more liberated lifestyle. However, the film is also shot through with a certain amount of good will and humour. For example, a sex scene between Teresa and Lazlo, as imagined by Nino, sees Lazlo take on the comical mannerisms of a horse in heat while also showing some of the realities of the human sexual spectrum. Such as the age old problem of getting a hair of your partner’s lady garden caught in between your teeth in pursuit of certain passions. It’s also humorous to hear Frank Finlay’s character come out with lines like “I didn't care anything anymore. Now my whole existence was that little piece of meat hanging between my legs.”

And that’s about it. A scene at the end of a funeral procession on gondolas seems to be making a stab at a political point but, like I said, it’s a little lost on me and seems kind of ineffectual in terms of a framing device to be honest. It’s a really nice diversion of a film though and, if you like movies with a period flavour and a certain amount of nudity, then I would certainly recommend a turn of The Key to you. Some may find it lacking but I found it had a certain charm and the eye candy of Stefania Sandrelli, who I’d seen before in movies like The Conformist and Black Belly Of The Tarantula, finally lays to rest another, brief erotic highlight of my teenage years. So thanks to Arrow for making this one available.
Posted by NUTS4R2 at 19:00