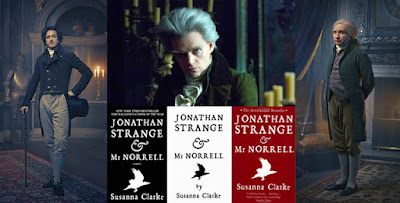 It's been a number of years since I first read Susanna Clarke's literary debut, the masterpiece Jonathan Strange and Mr. Norrell... a couple of years after it was first published in 2004, I believe. I had a girlfriend living in Ipswich at the time and so my Friday and Sunday evenings were all about devouring books to pass the long train journeys to and from my ultimate destination.

I remember, at the time, marvelling at the blend of fact and fiction in a tale where the author had veiled her characters, the narrowly focussed Mr. Norrell and the younger, heroic Jonathan Strange (whose name I took at the time, and still do believe to be, a less than veiled reference to Steve Ditko and Stan Lee’s 1960s super hero sorcerer Dr. Strange), with an air of realism by cloaking their fantastic deeds with four very vital ingredients that helped to give them an air of credibility...

Firstly there was the almost archaic tinge to the language. While not nearly as "old worlde" in style as the writings of one of my favourite writers, Jules Verne (and he certainly had an excuse), there was still a lack of haste in the writing style and a clarity of detail which I appreciated from the writer.

Secondly, and possibly as a natural offshoot of the decision to go with this writing style, perhaps, there was a certain amount of slowed pacing. There is no rush, especially at the opening of the book, to tumble quickly into constant feats of fantastical magic in an attempt to entice the reader in at speed. Instead she skillfully used her storytelling talents to treat the incidents of magic with a certain gravitas that pulls the reader in slowly and surely, rendering each magical act a little narrative event at first, building speed slowly from zero to a hundred until, in time, the acts of magic are accepted by the reader as background incidents to the fiction, while still somehow not losing the sense of magnificence as they occur.

Thirdly, she quietly mixes her fiction with the historical fact of the times the tale takes place in, with the Duke Of Wellington leading his armies into victory, giving her characters a context and then using them and their magnificent deeds to remould and retell history. This gives the story the context of an alternate universe which, once the reader can relate to it through the comparison of the historical basis (or our best approximation of that), helps to give the characters a weight of their own in their interaction with the events of their time... again rendering a very believable reality for the reader.

And fourthly, of course, their was the constant amount of footnotes which the writer used to add "fact" (or perhaps a better word for it would be "fict?”) to the circumstances and history of the magic in the books. There are over a hundred and fifty of them throughout the novel, providing little annotations regarding the legacy from which the use and existence of the magic practiced by both of the title characters begins. As any reader who has read this wonderfully enchanting tale will remember, the footnotes are of varied lengths but there is a lot of detail in them... some of them going on for a few pages of small text at a time, if memory serves.

I was completely blown away and delighted by the book at the time and knew that, someday, somebody would want the film rights (something which has already happened, by all accounts). I, however, was always keen to insist to anyone who would listen, most of whom had not read the novel, that the sheer size of the volume would surely lend itself better to a TV miniseries, given the breadth of the story and the amount of detail in it.

Imagine my surprise when I learned, towards the end of last year, that the BBC were co-producing a short series, totalling seven episodes of an hour each, of an adaptation of this much loved tale. Perhaps something that allowed for that much screen time would actually be able to do some justice to the source material? My enthusiasm was tempered somewhat when I saw the two actors who had been cast in the lead roles. Eddie Marsan is a great actor and I've seen him in a number of things over the years... but he seemed just a little young to be playing Mr. Norrell, in all honesty. Similarly, I seem to remember Jonathan Strange as being the dashing young hero type and the, unknown to me, actor they had cast, Bertie Carvel, seemed to me to be just a little too old for the part. I must admit that, until recently, the only person I would have thought absolutely perfect for doing justice to the role of Strange would have been Johnny Depp... someone who is, admittedly, probably out of the reach of a BBC budget. So, despite the obvious fact that the BBC tends to populate its dramas with brilliant performers, I was quite worried about the casting.

As it happens, my concerns were unfounded and I was soon to learn that even if the casting doesn't at first seem right, great actors who are more concerned with breathing life into their characters as opposed to letting their own personality dominate to the extent that it harms the production, are just as good as the serendipity of perfect casting, when it happens. Both Marsan and Carvel are brilliant in their respective roles, as are all the other actors and actresses in this version. These include Alice Englert as Lady Pole, Charlotte Riley as Strange's wife Arabella, Enzo Cilenti as Childermass and Marc Warren in the role of ‘Thistledown’, who is kinda the villain of the piece here (referred to as the gentleman).

Now I suspect, and I can't quite remember because I must have read at least a couple of hundred books since this one, that the writer of this adaptation has changed the order of certain events... or at least altered the structure a little to make it easier to digest for a TV audience. I seem to remember Jonathan Strange being around more in the early parts of the book for instance... but the character doesn’t have a great deal of screen time in the first episode. Also, a character who is a prophet, of a kind (and without giving you any spoilers) for an important but rarely glimpsed character called The Raven King, seems to be more prominent in this version. And again, ‘Thistledown’, who is admittedly an important character, also seems to be much more prominent in this version of the tale. Now, as I say, my memory may be at fault here or, perhaps, the art of the adaptation to naturally render the more visual aspects of the story and cut away at the various judgements and dalliances of the wordage automatically brings more prominence to parts of the novel which were less overt, in contrast, in the original format. I certainly can't, with any confidence, say either way... but that's a good thing, actually, as it gives me an excuse to go back and re-read it sometime in the future.

Another thought was that the production brings a very personal interpretation to some of the magical events in the tale and throw their own versions of enchanting spells into the mix from time to time. However, as I've said many times on this site in the past, good adaptation is not necessarily about doggedly sticking to all the details of the source material... it's more about creating something which follows the intent, spirit and style of the original work and, I have to say, the BBC have come up with an amazing version here which does credit to Clarke's original work and will hopefully inspire more people to go out and read it. It's easily the best contemporarily written book I've read in a very long time.

I was also somewhat impressed and pleased that the production doesn't shy away from some of the darker passages in the book... and this includes the fact that they didn't try and give the tale a more optimistic or audience mollifying ending. The way the characters are left in the book is a little bleaker than readers might, at first, hope for and with a little less positive closure than is comfortable for an audience who has grown to love and empathise with these creations over the course of the novel. The adaptation as it stands leaves the ending as it is in the novel and, because we go through so much with Strange and Norrell, it's not the most crowd pleasing conclusion in the world... but it is a totally appropriate one and well done to all involved for not tampering too much with Clarke's original ending.

Jonathan Strange and Mr. Norrell is a good example of what British television does best... producing a strong period drama to a very high standard. That they've also picked on source material that reshapes that period and remakes it from the viewpoint of an England where magic returns to the kingdom to deliver the twists and turns of the more fantastical aspects with all the enthusiasm and invention that they lavish on their flagship show, Doctor Who, is to be applauded and encouraged.  A truly entertaining adaptation which retains the spirit of the original work with the deft touch of a cast and crew that know exactly how to make the illusion work. I hope that the BBC will seek out more material of this nature to bring us in future. Might I humbly suggest that a serial based on Gordon Dahlquist’s The Glass Books Of The Dream Eaters may be a good place to start?
Posted by NUTS4R2 at 18:59