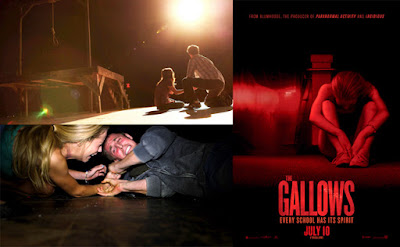 Okay... I really didn’t know what to expect from The Gallows before I went in and all I really knew for sure was that it was a found footage horror movie, which immediately gives one certain expectations as to the style of filmmaking on offer. The only other things I had to go on were the trailer... which is more of a teaser and is therefore quite effective... and a very short review from a newspaper which was tweeted online and which pretty much condemned it as a boring concoction with extra loud sound design.

Well all I can say to that is... loud sound design, perhaps. Boring... perhaps not.

It’s certainly as clichéd as you would expect a movie in the ‘found footage’ sub-genre of horror to be these days. However, like I’ve said in the past, when it comes to fulfilling one of the main goals of the modern horror film, namely scaring the pants off of the audience (as opposed to a porn movie, which is more about slowly getting the audience to pull their own pants off), then running with clichés can really work well... either as a fulfillment of the that cliché or as a way of setting up certain expectations before pulling the rug out from under said audience.

I’m delighted to say that, while The Gallows resorts to all of the tricks you would expect that this kind of movie would run with, it redeems itself somewhat by setting up a certain amount of suspense/tension with the camera work which allows the directors to make you jump loads and get the blood pumping. This is achieved by having a camera eye that constantly swoops around rooms as any of the four main characters take the primary recording device for the majority of the action to use it as both a light source and a way of trying to see around corners while, obviously, deliberately making other areas of the frame where you would want to see what’s going on... shadowy and somewhat impenetrable.

The plot is a little reminiscent of Michele Soavi’s Stagefright (aka Stagefright: Aquarius) in that it’s prime locations are theatrical in nature and revolve around the future performance of a play. However, where Soavi’s film is a giallo and is therefore about a human killer - and I don’t think I’m spoiling anything that you won’t find out in the set up to this movie - this one is much more of a horror film in its ingredients. The story focuses on a play performed in a high school theatre which went wrong when the lead actor was accidentally hung for real, instead of just faking it for the play. 20 years later a girl called Pfeifer, played by Pfeifer Brown, is attempting to restage the play, titled The Gallows, to honour its past and the man who lost his life performing in it. However, the new lead actor Reese, played by Reese Mishler, is terrible in the role and is only appearing in it to impress Pfeifer. So the night before the performance takes place Reese, along with his friend Ryan (played by Ryan Shoos) and his girlfriend Cassidy (played by Cassidy Gifford), sneak into the building via a “broken door which is always unlocked” to vandalise the set, anonymously, so the play can’t go through and Reese is spared the very strong possibility of being ridiculed by his peers. When they get in the building and make a start on this less than brilliant plan, they are startled by Pfeifer herself who has been lurking in a back room. Then, as you would expect in a film of this nature... all the doors are locked, there’s no way out and... something is stalking them.

Okay, so once again we have a horror film where the majority of the teenage characters are... well they’re just not very nice. Ryan is particularly obnoxious and certainly not someone you’d want to have hanging around. His girlfriend Cassidy is equally less than charming and, while Reese is a little more sympathetic than these two, he’s still not so great in making certain decisions. Pfeifer is probably the most sympathetic character of the lot and that’s a good thing when you eventually see how this film goes down. When you think this movie is over... make sure you stay for the final coda just before the credits start to roll... it’s an interesting ending which enforces the denouement you just saw and makes another connection to the origins of the spooky hijinks in the locked theatrical department.

Now, I’m pretty sure a lot of people are going to switch off in this movie due to the overabundance of these kinds of films on the marketplace in recent years. I think if this had been released back when The Blair Witch Project repopularised the found footage horror genre for a new generation, then this film would have been an all round smash hit. Unfortunately, it’s probably going to go under most people’s radar and that’s a shame because, midst all the clichés, there are some nice things going on here. A scene with a cell phone is something I never expected... it’s not overwhelmingly brilliant or earth shattering in its conception but it was slightly unexpected and, in this kind of movie, that’s always a good thing. There’s also a nice “moment of choice” for one of the characters which both allows that character to redeem themselves a little in the eyes of the audience while also condemning themselves to a nasty death. Actually, there’s a twist of irony in this moment as will be revealed at one point as that death is happening but... I really don’t want to reveal that here. I suspected it at a moment much earlier in the film and then dismissed the notion, so it’s good that the directors still snuck it in at the end.

Another cool thing is that two of the characters end up as an echo of a rehearsal of the play, The Gallows, as seen earlier in the film. They are saying the same dialogue but, due to the way the characters have bonded throughout the course of the story, the stakes involved by this pont in the movie ensure that we actually get to see a part of the play performed properly, for once, as an update of a scene from near the start of the film. There’s a pretty nice moment of realisation at this point.

Other than that, there’s not a heck of a lot I can say about The Gallows. There are a few genuinely spooky moments and lots of jumps and scares because of the deliberate lack of adequate camerawork... rather like a person on a roller coaster might tilt his head to anticipate where the next plunge might be coming from. I found it almost unbearably jumpy in places but I know a lot of people are immune to those kinds of cheap tricks so I think this one will have a split audience. It’s not as scary or as well put together as some recent found footage horror movies but it’s a heck of a lot better than a fair few of them, it has to be said. It’s not one I’d go out of my way to watch again straight away although, after seeing the end of the movie, there’s an added dimension to the proceedings which might reward second time viewers, I suspect (or would hope). It’s a bag of horror tricks but it’s certainly a competent bag of horror tricks and I think a fair amount of scary movie enthusiasts won’t come away too disappointed. I’m pretty sure there are going to be some people out there who will really love this one. Possibly one to check out at Halloween, if you don’t fancy a cinema trip now.
Posted by NUTS4R2 at 18:43