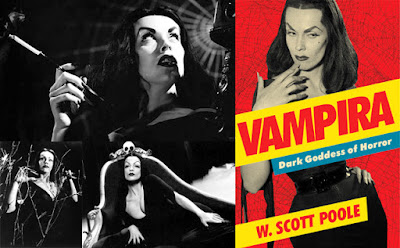 I'm not terribly familiar with Maila Nurmi or her more famous alter ego Vampira. Just snatches from my childhood acknowledging that she was in Ed Wood's Plan 9 From Outer Space and associated references to that shaky collaboration over the years. I also knew she was one of the earliest TV horror hosts... quite possibly the first. I further knew that she unsuccessfully tried to sue one of my favourite ladies of horror, Cassandra Peterson (aka Elvira, Mistress Of The Dark) for essentially stealing her act... something I really don't think is true, for a few reasons.

So when I saw, via Twitter, that a guy named W. Scott Poole had written a book about her, Vampira - Dark Goddess Of Horror, my interest was piqued. I enjoy a good biography and a peak at the insides of the mind of a dark, gothic creation riding the airwaves of the 1950s seemed like something that was definitely going to plug a gap in my horror education from that period. As it is, this is one of those few books I occasionally read where I'm just really not too sure about how I stand with it. My first instinct, therefore, was to leave off writing a review of it for a week or so and let the whole experience percolate in my mind for a while. Thing is, I've done this with books and movies before and what tends to happen is I forget bits and then never got around to writing the review... but I think this highly entertaining book is worth more than that so... here you go.

It would be quite true to say that, after reading this volume, I now know a little more about Vampira and, by extension, a little more about Maila Nurmi. The trouble is, however, that's pretty much all I know about her... a little. I don't think this is the writers fault, by the way, he is pretty up front about the lack of accessible material about the lady in question. He does, however, put together a fairly good if, by necessity, sketchy timeline about the key moments in Nurmi's life... most of it leading up to a one year blaze of glory when she created her iconic character and screamed, performed in and hosted horror movies on her weekly show Dig Me Later, Vampira. It's a show of which not even a few seconds survive so the signature moments of the show and style of the lady in question are very much coming from the memories of people who were alive at the time.

The book also discusses a certainly interesting friendship with James Dean and some unfortunate timing and insinuations surrounding the star's untimely death via correspondence from the lady in question. It also tells of the way the show was deliberately killed off, Nurmi's last ditch attempts at success in movies and TV, including stooping to working with Edward D. Wood Jr (somebody she wasn't exactly impressed with) and her many years as a partial recluse, scrimping a living in various ways and becoming a mascot, of sorts, for the West Hollywood punk scene.

However, like I said, the biographical content is fairly slim due to just how much is known about her.

However, what Poole does do, quite brilliantly, is look at the cultural context of Nurmi and her Vampira persona, where it came from and what the zeitgeist was that ushered in her birth. With Vampira borrowing elements from both the original cartoons that later became famous as The Addams Family and elements like the burgeoning 1950s fetish/bondage scene... back in the days when it was good ol' S&M (that's BDSM to all you modern cool cats). By placing Nurmi's creation within the political and social trends of her time, Poole demonstrates just how important and empowering in terms of feminist issues Vampira was and, though she was on air for only a year, just how influential her creation is even to this day. Poole explores things like the gay scene, the fetish scene, the American political fight against feminism and various other eye opening issues that modern audiences may well be unaware of.

The author also takes a look at all of these issues and demonstrates, systematically, just how the existence of Vampira challenged what was considered to be right and normal at the time. He even explains where the concept of ‘normal’ came from, how the word's popular usage was a phenomenon of the mid 20th Century and how much of a pointed and manipulative construct the idea of ‘normal’ really was/is.

Furthermore, Poole's writing style is quite punchy and throwaway in its construction... and I don’t mean that as a bad thing. It's easy to read and it reminded me of nothing less than a hopped up James Ellroy, at around the time his prose was becoming just a little bit more abstracted and frenetic, when he was churning out stuff like White Jazz. It's not necessarily the kind of style you would expect from something purporting to be a biography but, bearing in mind the difficulty of gathering and corroborating any material on Maila Nurmi, it's an understandable route to take because he is weaving more of an impression of what constituted this somewhat phenomenal lady's life and it brings you closer, in some ways, to the subject matter while still acknowledging that you really aren't able to get that close at all.

One of the book’s more controversial points is always going to be the events which lead up to the Maila Nurmi Vs Cassandra Peterson (Vampira Vs Elvira) lawsuit and I'm very pleased to say he covers it pretty fairly and uses a lot of common sense and diplomacy as he draws his own conclusions about the issue. He is also quick to make the point that, while Elvira may have some visual echoes in her personae, to a certain extent, they weren't necessarily 'first hand' echoes, so to speak, and the general attitudes and concerns of each creation are, in fact, worlds apart... which obviously doesn't help Nurmi's case but, at the same time, he's also quick to point out just why it was that Nurmi must have felt compelled to pursue this course of action in the first place.

All in all, this is probably not the most thorough biography of Vampira the casually interested party, such as myself, might expect. That being said, the writer has obviously gone to a lot of trouble researching the culture from which Vampira rose to challenge the collective consciousness of a nation and he not only does a damn good job of explaining it, he also shows us why there was actually a lot at stake in terms of the cultural impact of Vampira's huge popularity in the year she was on TV and he does it in an extremely entertaining manner. If you're already a big fan of Vampira and know a fair bit about her, then you might not find this book to be the most helpful in filling in any of the blanks, although the way it is written is fresh and gives an insight into the mindset that created her. If you know nothing about her, like me, then you may find this book to be a valuable pointer and something to whet your appetite. This probably isn't the ultimate biography of Vampira, but it's probably the best one we're going to get until anything else about her surfaces sometime... which is looking less and less likely as the years go by. Either way, I'm pleased I read it and I found bits of it actually quite educational... so I think this one’s definitely worth hooking up with, if you've got the time and inclination.