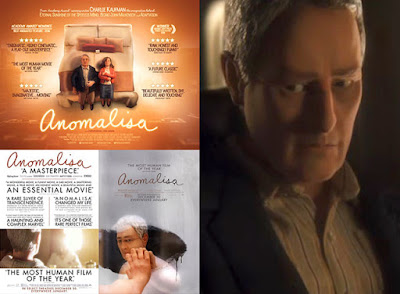 Welcome to my very short review of Anomalisa, a film that I went into totally unprepared for... which is usually a good thing. I’d seen someone recommend it on Twitter and I liked two other films written by Charlie Kaufman... Being John Malkovich and Adaptation. All I knew about the film itself, however, is that it was not a children’s film and that it employed stop-motion animation in the pursuit of the story, as opposed to live action filming.

As it started, I realised my experience wouldn’t be a totally negative one, at any rate, because there is a line or two of dialogue referencing Darren McGavin as Kolchak - The Night Stalker... so I was pretty happy about that. Another thing that I was happy with, after about a quarter of an hour, was the dawning realisation that the main lead was being voiced by one of my favourite and much under-rated actors, David Thewlis. So this was all good. What I didn’t pick up on until I waited for the cast list at the end, however, was that the Lisa of the title, Anomalisa, was being voiced by one of my favourite actresses too... Jennifer Jason-Leigh... so this was all good.

Another point of note is that there are a large number of characters, many of them quite minor, appearing in the film but the entire voice cast of the movie is only three people in total. Of those three, Thewlis and Jason-Leigh only play one character each... which means all the rest of the characters in the movie, male and female, are voiced by another underrated actor, the original Francis Dollarhyde himself, Tom Noonan. So a curio of a movie and I would expect nothing less than that from the mind of Charlie Kaufman, to be honest.

However, that being said, I can’t say I was totally enthralled by the movie I saw, either.

The problem with the film for me comes not from the basic idea or the voice acting (the three are amazing, as you’d expect) and even, the ‘acting’ of the stop motion models is pretty convincing... you might even find yourself forgetting you are watching puppets at some points. The main problem for me was just that it was a little dull in places. It wasn’t because the story is quite down beat and depressing, dealing as it does with Michael (David Thewlis) who is staying in a hotel for a night before addressing an audience about the keys of customer service... I can handle downbeat just fine and often prefer that kind of movie over anything which feels false. It just didn’t really go into a totally unexpected realm until one nightmarish sequence when one of the characters turned out to be dreaming. I thought it was going to go full tilt into paranoia and fantasy at this point but... nope, it just came right back into the hum drum reality of the characters again, as Michael spends his evening having a kind of meltdown, one of the symptoms of which is his one night stand with the title character.

All that being said, however, despite my ambivalent attitude towards the on-screen shenanigans of the animated characters, I didn’t exactly hate it either and I was surprised to find the end of the movie had gone so quickly... the hour and a half of the screen time felt like a little over 40 minutes to me... so I must have been getting something out of it. Perhaps it’s my ability to easily put myself in the shoes of the central character which made the film a bit less lustrous in terms of plot or story content (not that I’m the biggest fan of story, either).

There is, obviously, much to recommend and admire in the film, though...

I’ve already mentioned the incredible voice talent but Kaufman’s regular composer of choice, Carter Burwell, provides an appropriate if, not entirely, memorable score... at least in the context of its mix in the movie itself. It's the craftsmanship of the models, however, which really stands out in this movie and, more importantly, the way their movements and mannerisms have been observed. Little throw away moments that people seem to exhibit in their day to day existence seem to be captured in the way the models move and react to both each other and their immediate environment. There’s a sex scene which, I’m reliably informed, was the longest thing to film and get right. It certainly shows it was laboured over because it’s a nicely observed sequence where humanity at both its best and worst comes together as two people try and capture their own personal lightning. It’s a nice moment in a film full of ‘moments’ but, ultimately, it brings no real peace to the main protagonist, Michael, and the next morning Tom Noonan’s voice is pitched against Jennifer Jason-Leighs saying the same lines simultaneously. This is a clear indication, as we are obviously experiencing things from Michael’s perceptions, that Lisa is maybe less standout and special in Michael’s world than he (or she) at first thought... which is a shame and one of many downbeats in the film which races towards an ending of... well not much closure. The only sequence in the movie where a kind of 'anti-closure' is given is the final scene of the film, which is the only scene in the movie not to feature Michael, as it happens.

Ultimately, I’m glad, as an observer of cinema, that I got the chance to see Anomalisa. It’s probably not going to set the world alight, I suspect, but it is interesting and shows us a juxtaposition of technique and content that, while not exactly new, is at least unusual and rarely glimpsed. Not something I would rush out to see again but fans of cinema might do well to at least take a little look at this exploration of humanity and, frankly, I want to see (and hear), David Thewlis in more lead roles. America seems to have really wasted his talent, in some ways.
Posted by NUTS4R2 at 12:06