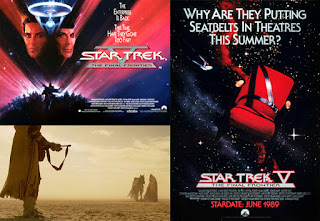 I first saw Star Trek V - The Final Frontier at a preview screening at the Empire cinema in London (before it became a multiplex and was one big screen, if memory serves me correctly). It was part of an all-nighter Star Trek screening, starting around about 8pm at night and finishing roughly at 6am the next morning. All four of the previous films were showing, with about 10-15 minutes between each screening... culminating in the premiere of this brand new movie. The cinema was packed out with people cheering and laughing at accidental sexual connotations in the dialogue of the earlier films and we had a laser show in the intervals between each movie. The atmosphere was electric. If you got hungry... well, you had to go grab hot dogs or pop corn and the queues for the loo between movies were staggering but, other than that, it was a pretty good time.

I went to that event with a friend who was totally into Star Trek (probably more enthusiastic and wide eyed/naive about the series than I was) who I haven’t seen or heard of for at least a decade now (which I kind of regret). I knew this movie was going to get a bad reception after we’d seen it because, although I’d had quite a good time with the fifth one, my friend Andy, who would never say a bad word about Star Trek, was... well he didn’t seem all that into it, to be honest.

I actually feel a little sorry for William Shatner here as I have a bit of a soft spot for this movie and don’t think it deserves the reception it got. He was up against massive budgetary cuts on things like special effects as a result of the writer’s strike in Hollywood and it really couldn’t have been easy to keep this thing afloat. Looking at it again now, I still quite enjoyed the movie and I think one of the producer’s comments on why it failed may have been quite on the mark. Star Trek - The Next Generation had been a TV series for two years already at this point... in fact some of the sets even found their way into this production... and with brand new episodes of this showing, fans may have been less interested in going back for repeat viewings of this one (which is what the box office for a movie really makes its money on) when they could catch up on the crew of the USS Enterprise NCC1701-D in the comfort of their own homes.

I’d argue now though, having see this one again, that it’s one of the stronger Star Trek movies in the franchise’s long history and, certainly, much better than a few of The Next Generation movies that came along later. This one is the only one of the movies to date, unless you count the recap at the start of Star Trek III - The Search For Spock (reviewed by me here) to have a pre-credits teaser sequence and it’s a pretty good opening. Here we meet the prime... well I won’t say he’s a villain because he really isn’t... here we meet the prime mover of the movie, Mr. Spock’s half brother Sybock (The Laughing Vulcan) who was outcast from his people because his pursuit of knowledge brought him to embrace emotion and he is now assembling a small army so he can lure a starship to take him to the centre of the universe to... well, to basically meet up with God. In a scene which is almost straight out of Lawrence Of Arabia in tone, we see him ride up to a fairly striking looking character and recruit him by making him face his ‘secret pain’ and sharing it... presumably using skills similar to the Vulcan mind meld which we’ve seen both Spock and Sarek use in the series in the past.

So basically we have a terrorist on a religious quest who rejects violence but is willing to look like he will stop at nothing to acquire the means to capture a starship and fly it straight to God, whom he saw in a vision. Along the way he recruits various people on his quest, including key members of the regular crew of the Enterprise and... the story is one where both heroes and villains are somewhat undefined with the one true bad guy of the piece being the ‘man upstairs’ who Sybock seeks and ultimately finds. Luckily, the shaky premise is given a shot in the arm because Sybock is played by a guy called Laurence Luckinbill who is absolutely perfect for the role, exhibiting just the kind of charisma you would want from somebody playing that kind of part and he seems more than enough of a person to give Kirk a run for his money. This was his last cinema movie but he still occasionally works in TV, apparently, and he’s also the son-in-law of Lucille Ball and Desi Arnaz. He’s frankly brilliant and this movie would have been a lot worse if he’d not been in it.

But you know what else is brilliant about this movie?

Pretty much most of it. Yeah, I know I’m in a minority here but what do people have against Star Trek V? It’s got a bit of an anticlimactic ending, for sure, and that’s not the fault of William Shatner because the money was running out and the first attempt at some rock creatures chasing after Kirk just wasn’t working. However, it’s a good enough ending and the humour in the dialogue is at least the equal of the previous film, Star Trek IV - The Voyage Home (which I reviewed here). Added to that you have the regular cast doing what they do best and they’re all brilliant. Everyone gets a chance to shine in this one and they certainly have some great moments among them. We even have David Warner joining the cast as a ‘terran’ (or human) character... the first of three different species he played for Star Trek in one form or another, if I’m remembering correctly.

Spock looks, perhaps, a little over made up compared to what he usually gets in the movies, maybe a deliberate attempt to make him look closer to how he did in the original show... so, yeah, he looks a little like a stylised version of himself sometimes. A caricature of Leonard Nimoy playing Spock, almost... but I think it really works here actually and I wish they’d have kept that kind of look for future installments of the film series.

My one big problem with it is that the scene where Sybock shows Kirk, Spock and McCoy each other’s ‘secret pain’ makes him look a little too much like a wizard with special powers. How a simple Vulcan is able to conjure up this kind of audio/visual hallucinatory experience is not fully explained... so I thought the character lost a little credibility at this point in the proceedings but this is only a small element of the film and it isn’t too jarring with the rest of it.

Also, Jerry Goldsmith finally returns to the movie franchise with this one... after his unbelievably cool score for the first movie, ten years prior to this. I think what had happened there is that his main theme for the original had become popular again, since it had been used with smaller orchestration, as the opening theme tune to the Star Trek - The Next Generation TV show. For the show it was wedded to a new version of the old classic TV opening moments before leaping into Jerry’s well known theme and, for this return to the franchise, this is exactly what he does with it here... before going into some beautiful music detailing Kirk’s ascent of a mountain. The score to this movie is pretty cool and has some glorious action moments... don’t get me wrong, it’s no Star Trek The Motion Picture and lacks that score’s power but... it’s still a pretty great piece with a lot going for it. He also brings back his Klingon music which he used to score the opening of that first film, here used as a regular theme for a bored Klingon who wants to defeat Kirk in battle, and it’s an interesting version of the music as used here. Very dynamic with ‘wails and clickety clacks’* thrown into the mix in a pleasing way.

I can only assume that the slightly anti-climactic ending of this movie, coupled with the blurring between who are the heroes and who are the villains, are the other main culprits as to why the film performed abysmally at the box office... along with the fact that there was also brand new Star Trek on television at the time. All in all, though, I think this is a movie which is vastly maligned by its fan base and deserves to be rediscovered as the fun movie it is at some point. Hats of to director Shatner for this one... I think he did a grand job. It holds up pretty well, as far as I’m concerned... one of the fun movies.