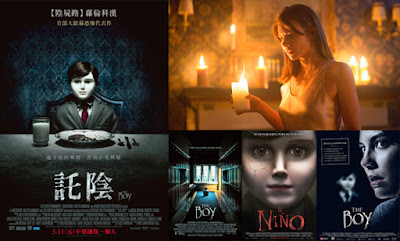 Well this is a bit of a shame. I was all up for a creepy, haunted doll movie after the 2014 film Annabelle (reviewed here) turned out to be such a disappointment in this sub-genre... especially after it was a spin off of one of the greatest modern horror movies ever made, The Conjuring (reviewed here). The trailer to this one looked deranged enough and had some nicely atmospheric moments which compelled me to take a look at the cinema, even if just to find out if either of the endings to the movie I had in my head, due to the way the trailer was edited, were the correct solution to the on screen mystery.

So off I went and I would normally, at this point, be very happy to say that The Boy completely went in a different direction and took me by surprise... if it wasn’t for the fact that the direction it does go in is such a mis-step that it completely destroys the atmosphere of suspense and lurking dread that the rest of the film had been working so hard and successfully to achieve. And it’s a pity because, frankly, right up until the last twenty minutes or so of the film, the audience I saw it with were completely going with it.

If you’ve not seen  the trailer, the plot of The Boy is about a woman called Greta, played by Lauren Cohan, who has come to England to escape an abusive ex-boyfriend, taking on a job as a babysitter/nanny for a while at an old mansion sized house. However, when the parents, who are about to go off on holiday, introduce her to the young ‘un in question, who is called Brahms, they introduce her to a doll. The parents act and talk around the doll as if it’s alive, somehow embodying the spirit of their eight year old boy who died in a fire and they have a list of duties which they expect Greta to follow while she is left ‘holding the baby’, so to speak. Greta thinks the two of them are fruit loops already but it’s easy money and suits her needs to be out of the USA while her ex pursues her by force, so she’s happy to take the money and go through the motions.

However, when she is left alone, it becomes clear that something else is going on with The Boy and the supernatural seems to come into play. Kinda. Perhaps. Oh, look... although this film uses the visual syntax and grammar of a horror movie, it really doesn’t roam into that territory as far as I’m concerned. Sure, it uses jump scares and dream imagery to shock the audience at some points and the audience I was with, in particular, were really jumping at some of the quite obvious moments where this kind of cheap effect takes place... but as far as I’m concerned the film belongs in a completely different genre and not the one seemingly presented here, to be honest.

That being said, the performances are mostly pretty good with the main protagonist Lauren Cohan being ably matched by ‘the delivery boy’ Malcolm, played by Rupert Evans. I found the acting by Brahms himself to be a little bit wooden but, you know, I guess that’s to be expected. The acting is nicely supported by some roving camera work which does all the usual horror clichés too, diverting attention to edges and corners of screen so the audience can keep worrying about where the next fright is going to be coming from.

The big problem here, though, is the last 20 minutes of the movie. The writers/director decide to take the solution of having what has been going on in the film up until now as being some kind of red herring to set up with a twist but... it’s a really awful one and completely downgrades the movie, I reckon. And it was such a promising set-up too. However, I know I’m not the only one who thought so because, although the audience had been acting really jumpy and scared throughout the course of the movie, here they started to realise the over-the-top ridiculousness of the situation and began to openly laugh at the chase/histrionics at the tail end of the movie. It’s a real shame and, not only was it a lame solution to lumber the movie with, it also stands in a somewhat contradictory manner to the way some of the POV shots in the film were taken. I don’t want to say too much about that on here but certain technical details of those kinds of shots seemed somewhat at odds with the film’s final solution and it appears, in some ways, to make a nonsense of the rest of the film proceeding it.

Now, I heard the movie had a slightly troubled production and post-production, specifically on the latter in scenes which were cut from the movie in order to gain a softer, more money friendly rating. Now, for whatever reason those sequences were cut, one possibility I have to consider is that maybe there was footage missing from the final print that explained a few of the contradictions in the story/genre type as I found them... so it may not have been the fault of the director if certain elements of the story don’t jell as well as they could have. Even so, I think the end game on this movie was a huge disappointment. And the ending sequences just felt kinda tacked on. I saw 10 Cloverfield Lane  (reviewed here) the previous evening and, although that film does indeed have an additional ending sequence which brings it into the Cloverfield universe, at least it was a sequence which inspired terror in the audience. In The Boy, it was more apt to inspire laughter, as it transpired.

A saving feature of the movie is Bear McCreary’s score but I was less enamoured of this one than his two other recent masterpieces The Forest (reviewed here) and the aforementioned 10 Cloverfield Lane. His score to The Boy is less what I would recognise as the ‘McCreary sound’ but at least it’s appropriate to the on screen visuals and works okay as a stand alone listen, away from the movie. The music from the last act may resemble an 1980s, cheesy straight to VHS release from your local newsagent in tone but... like I said... that’s actually pretty appropriate to what we’re getting up on the screen during these moments so the composer does pretty well with the material he’s got to work with. I’ll certainly be spinning the CD a fair bit, which is more than I can say for the movie, when it gets a home video release... I won’t be watching this one again.

If you’re a fan of horror movies then the first three quarters of The Boy is pretty cool... but you might find yourself let down at the end. I can’t imagine anyone without an interest in certain 1980s sub-genres of mainstream thrillers are going to get a hell of a lot out of this one, however. Not something I could really recommend and it’s a real shame because I think the basic premise of this one works really well, up until a certain point. Not up to scratch though, at least for me, as far as scary doll movies are concerned. Approach with caution.
Posted by NUTS4R2 at 19:27