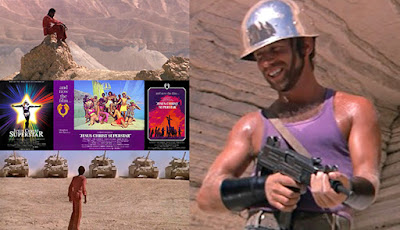 You know, people who know me well know I could not be said to be a religious person. I have no problem with accepting the ‘possibility’ of a God in some form or another but in terms of religious belief... well, for all its variations and censorship issues, it’s just a man made concept designed to help keep the masses in order. Not my thing.

However, if you’ve never seen (or as importantly, heard) Jesus Christ Superstar because you think it’s in some way a religious treatment of the tale then you really need to think again, do yourself a favour and maybe read the rest of this review before you dismiss it. After all, how many pseudo-Religious epics do you know that have Romans wielding machine guns, drugs, prostitution and tanks rolling in as a calling card? Also, there’s a reason why members of the clergy were handing out flyers and trying to stop people going in to see various productions of this thing in its many forms, back in the 1970s... and I’ll get to the tone of that soon enough.

Jesus Christ Superstar started off life as a rock opera concept album by British composer Andrew Lloyd-Webber and lyricist Tim Rice. It was an amazing work in that it didn’t cow-tow to popular depictions of the roles in various religious texts over the centuries and instead looked at the myth (or however you want to describe it) as a down to earth study of the psychology of, primarily, the relationship between Jesus and one of his disciples Judas Iscariot. It very quickly became a sell out Broadway and London show based on that album and then went on, in 1973, to get the inevitable film adaptation by Robert Stigwood, with a screenplay by Melvyn Bragg.

Shot on location in Israel, the film starts with the overture, which brings some of the catchy themes into the foreground, as it pans through the ruins of a temple. As it really gets going we see a coach arrive. The players and crew, all in contemporary dress, exit the coach and get out, unload some equipment, get into costume and generally get ready for their unique version of the Passion play. The film then continues strongly with Carl Anderson’s Judas Iscariot, in an almost perfect left-of-centre composition, sitting on a rock watching them all set up while he starts singing the opening number, Heaven On Their Minds. This really sets the scene for the kind of alleyways this particular look at the legend goes, with hot lyrics in this number like “I remember when this whole thing began, No talk of God then... we called you a man” and “Well your followers are blind, Too much heaven on their minds...”

It’s a great song and the whole thing is done with panache, leading into great numbers like What’s The Buzz? and Everything’s Alright. Unlike some versions of the story, Webber and Rice have no problem calling a spade a spade when it comes to things like, for instance, Mary Magdalene being a former practitioner of the world’s oldest profession, as Judas is quick to point out with lines like “It’s not that I object to her profession... but she doesn’t fit in well, with what you teach and say.” Indeed, Mary, played here beautifully by Yvonne Elliman, is also quick to point out her history in what was one of many quite controversial lines in the show/album/film, contained in this case in her signature song I Don’t Know How To Love Him, when she sings “I’ve had so many men before, in very many ways...”

Jesus Christ Superstar is also not a version of the tale that’s afraid to show the cracks in the myth, or chinks in the armour of the religious pretension that binds it up. Indeed, when Judas criticises Mary’s use of 'fine ointments' on Jesus when it could have been used to raise money for the poor, Jesus, in actor Ted Neely’s wonderfully powerful vocals, sings a reply which sounds pretty much like something the current British Government would say... “Surely you’re not saying, we have the resources, to save the poor from their lot? There will be poor always, pathetically struggling, look at the good things you’ve got!” Hmmm, now who does that remind me of?

The whole thing is full of clever lyrics and little throw away lines that come back to haunt you later on as being really quite something special. Like the lines in the song This Jesus Must Die... “Singer 1: No riots, no army, no fighting, no slogans. Singer 2: One thing I'll say for him, ‘Jesus is cool!’.” And, of course, it really helps that a lot of the songs are just plain funky, catchy tunes with rocking guitars and amazing orchestrations going on with them. It’s a bit of a musical masterpiece, truth be told, and if Lloyd Webber had done nothing else, and I don’t like a lot of his stuff to be honest (although Cats and the original version of Tell Me On A Sunday are pretty amazing), then he would still deserve the kind of reputation he has these days on the strength of this one musical. The brilliance of both the lead characters in one song using the derogatory terms of each other’s names in the actual situation of them being what the words have come to mean, personified, is phenomenal...

Judas: “What if I just stayed here and ruined your ambition. Christ, you deserve it.”

It’s pretty good stuff, when you reflect on it in the context of the song and in the moment. You really need to hear it to get the full weight though.

Anyway, this film also brings the visual elements ‘to the table’ to match the absolute cleverness of the lyrics and scoring. The syntax of those elements, often working with the score but sometimes cutting against them to push a point, is nothing short of brilliant and bits you would think an editor might not be able to get away with, work really well. For instance, following one set of dancers as they jump up and then actually freezing the frame for a beat before it cuts to another group of dancers in the same formation coming down. It’s great stuff and the freeze frame is rarely seen as a force for creative expression in film and TV but in this movie it really is used to great effect. Another, for instance, would be the throwaway chorus line in Hosanna, when the crowd sing “JC. JC. Won’t you die for me?” and the camera focuses and then freezes for a few seconds on Ted Neely’s face while the song continues, as if to highlight that this might be when Jesus begins to see the writing on the wall, as far as his final fate is concerned. It’s great stuff and, again, it shouldn’t work but it just does.

And slow motion, for goodness sake! It’s rare that you see slow motion used well in anything but here, Stigwood manages to use it in a way which actually enhances certain moments and, in some cases, brings the full weight of terror hiding beneath the lyrics and visuals to the foreground, despite the up tempo music which is underscoring the action. Mary dragged away as Jesus is being whipped to a phenomenal piece of scoring springs to mind as an example of this.

I’ve got nothing but good things to say about this one, I have to admit. The idea of bringing the contemporary elements with the coach, guns, tanks, planes etc is all great. The sobering commitment to not turn away from demonstrating the political agenda of Simon Zealotes who wants Jesus to “Add a touch of hate at Rome”. Even the sheer ‘weight of numbers’ as Jesus rejects the pleas of the lepers is actually quite overwhelmingly horrific, when you take a step back in your mind to think about it after the fact. Like I said, I’m not a religious person, but when Christ throws the pimps, prostitutes, money lenders, drug dealers and various trading stalls out of the temple, one has to think about modern churches and cathedrals like Canterbury and such like, which have cash exchanges and expensive gift shops residing within. You have to wonder, if a Christ figure did actually exist, what he’d think of all this going on now. I don’t think he’d be all that pleased with the idea that you can buy fudge and bookmarks in his alleged father’s name, to be honest. But I don’t think I’ll say more about that here.

So there you go. Not much more to say on this one other than it’s a bit of a masterpiece work... first as a concept album, then as a stage production (I remember seeing this when I was about seven years old in 1975... I think Paul Nicholas was doing it at the time) and then as this fabulous movie production. The visuals will have you spellbound and scenes like the sudden montage of religious crucifixion art suddenly popping up in the middle of a song will sober you up quick, even while the incredible musical score will still have you tapping your toes all the way through. If you’ve never seen or heard this one before and have been put off because you think it will be a preachy, religious experience... well, it certainly isn’t that and I’m sure many people will see it as the absolute opposite, actually. There are no miracles to be found in this version of the ‘story’ and no resurrection at the end... although there is a sequence which may or may not (you decide), take place in Jesus’ head as the angel of Judas sings the title number at him while questioning his judgement and actions. It’s good stuff. But don’t take my word for this one because it’s a pretty cool movie and you need to make your own mind up about it... and whether or not you want to see it, for that matter. I’d thoroughly recommend it and, frankly, it’s got some really cool guitar riffs and lyrics in this one. You know where I stand on this... it’s a work of art. And I like good art. Now where do you stand?
Posted by NUTS4R2 at 11:21