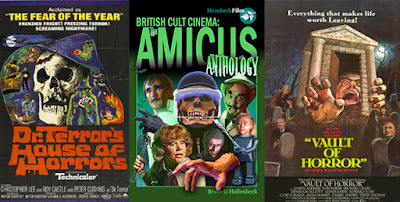 Once again, author Bruce Hallenback gives us a book about an aspect of British Cinema history which isn’t very often covered, in a fairly inexpensive reference work put out by Hemlock Books. Now, it has to be said, I was mistakenly expecting this book to be about the history of Amicus studios, something I know next to nothing about and was therefore thinking this to be a quick primer in the development of the studio. Not so, in fact, although in some ways you could say it does do some of that job. Primarily, though, British Cult Cinema - The Amicus Anthology is doing exactly what it says on the cover, which is giving a unique and fairly charming overview of the specific anthology films which Amicus put out over the period they were in business... all of which were horror anthologies, of course.

Now, I’ve never seen any of the movies in this book while I was at an age that I can actually remember them now (I’m sure I must have seen over half of them when I was about 7 or 8 years old) and so one of the nice problems to have with a tome of this kind is that Hallenback gives some good descriptions, including the weak and strong points, of a number of films that I now have to somehow find the money to be able to purchase them all. A few of them, to be fair, I already have sitting on the shelf in a ‘to watch’ pile but even in terms of the ones I already have, I believe there are some nice new, restored and uncut Blu Rays coming out or already in UK stores... so I will have to find some cash from somewhere to give a few of these things their due.

As he did in his tome British Cult Cinema - Hammer Fantasy And Sci Fi (reviewed here), Hallenback starts off by first giving the reader an overview of the specified film format as it was before Amicus Studios started churning out their productions. So you’ll find a chapter highlighting films such the famous (infamous?) Dead Of Night in here. It’s always good to have some historical context thrown into the mix and to root the subject matter in and the writer does a fine job of picking out interesting highlights (and lowlights) over the years before then giving us a brief history of the originations of Milton Subotsky and Max Rosenberg’s Amicus Studios and the financial state they found themselves in before the first of these was ready for the cameras to roll on. After this, he goes on to detail each of the Amicus anthology movies in turn, starting with a film I must get around to seeing soon, Dr. Terror’s House Of Horrors, assigning a new chapter to each film.

Of course, this experienced writer (it looks like he’s written a fair few of these types of books for Hemlock over the years) knows very well about giving the reader context for the specific movies he is bringing to life here, so you will also know what some of the other key Amicus films were being made at around the same time as the ones highlighted in this volume. More importantly, he gives you a handle on the script process and the development of each project for the films in question.

For example, since a lot of the stories in these anthology films started off as short stories by famous writers such as Robert Bloch (most popularly remembered as being the writer of the original novel Psycho, which Hitchcock made famous) or comic strips in the infamous EC Comics, he also gives you examples of the original works which inspired the ‘episodes’ contained within each film, often pulled and boxed out by the designers of the book. I was actually a lot less impressed with the design on this one than the actual writing but the principle of execution for the layout is sound, at least. Hallenback even, to a certain extent, goes on to compare what ended up on screen with the original source novel and sometimes script and highlights the differences, which is handy.

The writer also details the more prominent career points of the various stars in these films which I found most enlightening, especially in the case of Geoffrey Bayldon. I originally knew the actor on television, when I was a nipper, in the title role of a show I used to love, and which I’m sure many of my readers must be familiar with... that of Catweazle. Years later, he became as much loved by the young un’s in the regular role of The Crow Man, opposite Jon Pertwee’s Worzel Gummidge. For years, growing up, I was wondering why nobody had thought of offering Bayldon the role of The Doctor in one of my favourite TV shows, Doctor Who. Well, all I can say is it took this book for me to find out that Bayldon had, indeed, been twice offered the role of The Doctor, once before William Hartnell established the role and again before Patrick Troughton took over from him and, each time, Bayldon had rejected the offer. It’s a shame though and I wonder if,  with hindsight, the gentleman in question regrets his decision nowadays... I think he would have been just right for the part.

Anyway, I digress. Also, for each movie covered here, Hallenback lists any changes for markets once the product was finished. Being extremely interested in censorship issues myself, this information is worth its weight in gold... especially useful for fairly active DVD and Blu Ray buyers researching which versions of the films to get from which countries, so as to get the fullest print possible. The writer also gives a brief synopsis of the separate stories in each of these films - so beware there are spoilers - and also goes on to excerpt extracts from reviews and so forth in order to give the reader an idea of the critical reaction to each work, before also going into how strong the box office was for each offering.

And so the book goes on, with a chapter on all of the Amicus anthologies (there really weren’t all that many of them) and also some very close relations to them where one or the other of the partners was involved in a similar product which didn’t, for whatever reason, carry the Amicus name. Which is also good to know.

To finish the book, Hallenback goes on to detail the most prominent ‘Horror Anthology’ films which hit the screen since the end of Amicus’ reign of ‘cinematic terror compilations’ and so you’ll also find movies such as The Monster Club and The Twilight Zone The Movie detailed in here. Again, this section is equally full of facts about the productions and I, for instance, had no idea how many years had passed since The Monster Club was ‘in the can’, so to speak, before it was released on UK shores. We knew nothing of the long delay at the time and I can remember seeing it in cinemas over here in the 1980s.

So there you have it. Bruce Hallenback gives us a truly entertaining and, at least as importantly, enlightening tome on the Amicus horror anthologies such as Tales From The Crypt, The Vault of Horror and Tales That Witness Madness. If you’re into British horror than this book, like more than a few by the same author in this series, I suspect, is an indispensable tome to have on your bookshelf. Not the best looking book in terms of design but, in terms of sheer information imparted by someone who’s obviously enthusiastic about his subject matter, worth its weight in blood and bone.
Posted by NUTS4R2 at 12:25