The Other Side Of The Door 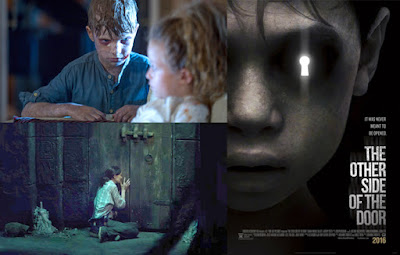 The Other Side Of The Door
2016 India/UK
Directed by  Johannes Roberts
UK cinema release print.

Warning: Yeah, there are probably what could be
considered some very slight spoilers, for some, here.

When I first saw the trailer for The Other Side Of The Door a few weeks ago, it looked to me like just another in a long line of reworkings of W. W. Jacobs famous tale The Monkey’ Paw and, yeah... that’s pretty much on the nose as to what it is. Of course, it’s not like a lot of the other various 'labelled' movie and TV adaptations of this story over the years in that it goes very quickly past the last act of that tale as, I guess, you would expect it to in this day and age. This film does, though, exactly what I expected it to do... dispensed with the three wishes part of the tale and found a different means to bring the dead son back to... well not quite life... back to the undead, I guess.

The film replaces the monkey’s paw with a magic temple in India and, after a strong pre-credits moment when a girl on a beach turns out to be... something else... we have a fairly long ramble until we get to the point where the mother, after a failed suicide attempt, is tempted to bring her dead son back from the dead... by going to the temple. The rulebook on this one is that you scatter the ashes of your loved one outside the temple, where death and life meet, and lock yourself in. You will then, in the night, be able to speak to your deceased relative but, no matter how much they plead, you must never open the door to let them inside. So, yeah, the rule books are always thrown out the window in these kinds movies otherwise you’d have no story progression and this one is no exception.

Now, the film is fairly well made in some ways... the tension in certain sections is nicely ratcheted up and the director has a penchant for using any verticals he can find... trees, columns, fencing and even the corners of a four poster bed... using them to split the screen up into sections for the actors to play in. So there was definitely some nice stuff going on here but... and it’s a big but... while the atmosphere in some sequences works well, in other parts of the movie it tends to fall flat on its face.

For instance when the, at this point invisible, ghost son wants a story read to him in bed, a book drops off the shelf, the lights go on and a chair is invisibly pushed into place... and the movie completely loses any power it had to be creepy or eerie in these moments. Maybe it’s the suddenness and speed at which these incidents occur that was the problem but any slow build up to these moments are pretty much lost at these kinds of points in the film. It’s too well lit, it’s too fast and it’s downright comical in some places, it has to be said.

Another thing that seems a bit 'off' in this film is the timings of some of the shots. There are plenty of moments in this movie where the director is trying to scare the pants off you via jump scare tactics and, yes, he uses all the clichéd set ups you would expect in a horror movie, good or bad. I have no problem with the film taking the obvious route in these kinds of situations because, done well they can really work. The trouble here, though, is that they aren’t done that well in a lot of places... some of them work and have the desired effect but at other times, not so well. For instance, there’s a transition moment from one quiet scene to another where the shot starts with a large flock of birds taking flight, loudly on the soundtrack. Now that’s obviously supposed to be a big scare moment but... yeah, it just doesn’t work. The timing is all wrong it seems to me... can't quite explain it but maybe the editing lingered just a beat or two too long to get the required jump. Usually this kinda thing works on me... and it did in some of the other parts of this movie... but here, nothing.

One of the big saving graces of the movie, apart from some beautiful scenic shots of India and the performances by Sarah Wayne Callies, Jeremy Sisto and Suchitra Pillai as the mother, the father and the wise housekeeper, is Joseph Bishara’s score to the movie. It’s nicely unsettling and this, at least, goes a lot of the way to supplying or bolstering the required tension in certain sequences. Of course, this composer has a particularly good track record in composing for horror scores, with his three Insidious scores (movies reviewed here,  here and here) and his scary sci-fi score to Dark Skies (movie reviewed here), which is a pseudo horror film in itself. He’s a composer who I feel really raises the stakes when he works on one of these things and this movie is no exception. I’m hoping this one will at least get a CD release somewhere down the line so I can hear it divorced from its context. Bishara does this stuff pretty well.

However, all the music, beautiful photography and fine performances in the world can’t stop The Other Side Of The Door being as obvious and light weight as it is as a horror film. I think the editing on this one might have helped enormously if it was drastically trimmed in places but, asides from not quite working on some of the jump scares, it also feels a little bloated in places and uneven in pacing in certain areas. Also, I’m pretty sure most people watching will see the very last scene of the movie coming way before it happens. It’s a well done moment but... totally expected and, although clichés like this can work, I think using it here just feels like a final slap in the face. I would imagine if you’re a young teen and you’ve not seen these kinds of horror movies before then you might find yourself surprised and, possibly, even frightened in places on this one but, for the majority... no. I reckon seasoned horror fans certainly won’t find an awful lot to get their teeth into here either. A really nice try but... just not enough subtlety or tension, I suspect. Perhaps don’t necessarily be tempted to look beyond the other side of the door of your local cinema screen if there are other films you want to see out there at the moment. You’ve been warned.
Posted by NUTS4R2 at 19:21