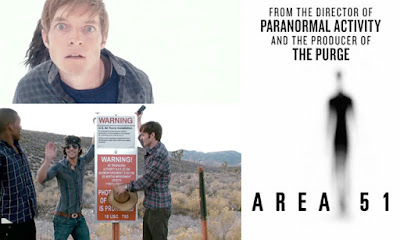 Warning: There are some major spoilers lurking in this one.

You know, I really like Oren Peli and his Paranormal Activity movies (apart from Paranormal Activity: The Marked Ones - reviewed here ... which sort of failed miserably) and I did kinda remember that he was making Area 51 at some point... but I’d also forgotten about it. A friend pointed me in the direction of it as it only just came out a few months ago in some kind of ‘on demand’, non physical release (yeah, like I’d actually be interested in streaming anything you guys) and so I managed to acquire a ‘review copy’. Turns out, the film has been sitting on the shelf since its completion in 2009 and it’s not had a proper release in any way, shape or form apart from a few limited screenings and the aforementioned, non physical media... which doesn't count as a release at all, in my book.

I was interested to see the film has got bad word of mouth and people mostly think it’s not a good movie, for some reason. In fact, the one review I read sounded more like they were reacting to the movie the way I reacted to Paranormal Activity: The Marked Ones. However, I would like to humbly point out that my opinion of Area 51 is decidedly contrary to this. In fact, I found this to be a terrifying movie, if truth be told.

This is, of course, very much a found footage horror movie and, at the time this movie was actually shot, that approach to movie making in this genre certainly wasn’t as overused as it seems to be six years on from when this was initially made (although I’m hearing now there were some recent reshoots on this). Truth be told, a movie like this was always going to have great potential to scare me silly because of the subject matter... I had a few sleepless years researching this kind of stuff at one point and I feel fairly close to the obvious subject matter suggested by the title.

Unlike The Marked Ones, Area 51 mixes footage from multiple cameras of a bunch of young people who I actually didn’t hate. One of the group, Reid (played by Reid Warner), is the driving emphasis behind the mission as we see him disappear from a party he and his friends have been attending and then turn up again in the middle of the road hours later, suffering from missing time (a common alien abductee phenomena). We already know from fake interview footage which starts the film that, after this experience, Reid’s personality changed dramatically and his research led him to investigate UFO activity before he went away one weekend with his friends on a trip and... never returned. So, yeah, we have a little foreshadowing here, I guess, which is not too subtly done but, similarly, the found footage format does tend to disguise, or at least give credence to, a sloppier, more overt way of telling a story so it’s more than forgiveable in my book. People in real life are, it has to be said, mostly sloppy and overt.

There are some terrific sequences in this one including scenes of following a government employee, staking him out and then breaking into his home before almost getting caught. The suspenseful tension in this scene, which seems to be shot in the same house they used for the second of the Paranormal Activity movies (reviewed here), is quite palpable and this kind of “are they gong to get caught” dilemma is always something I find hard to sit through without a certain amount of anxiety anyway.

After stealing a security pass and then reuniting with the main female lead, Jelena (played by Jelena Nik), a character who’s father “committed suicide” due to his research into this stuff, one of the group is left in the car waiting overnight at the edge of Area 51 for a quick pick up while three of our ‘camera eye’ friends break into the facility at night. Now there is a certain lack of credibility in this sequence, in some ways, because you would imagine this place is a lot better guarded and secure than is suggested here. The kids break into this place easily and start roaming the corridors. The director teases us for a while by showing us alien technology, including the outside and inside of a flying saucer but also backs that up with scary looking case studies of dead humans who have met a nasty end at the hands of... whatever the government have in ‘the lower levels’. Then one of our intrepid three accidentally sets off the alarm and they get separated -  Darrin (played by Darrin Bragg) running around a few levels below the surface of the complex, while Reid and Jelena proceed to hurriedly penetrate further into the lower levels.

At this point the film becomes a chase movie with the three main protagonists trying to both evade the security guards in Area 51 while at the same time trying not to become victim to the brutal alien species in the base. The aliens are not seen that much and although I didn’t realise it at the time, I’m now thinking we see two different species of alien creature in the movie... or not see them, depending on your point of view.

Okay, it gets a little spoilery here so maybe don’t read this paragraph if you don’t want to know... The thing which impressed me with the slow, Dante-like penetration of the various levels below Area 51 by Reid and Jelena was that there is a kind of logical hierarchy to the aliens that they experience and it's the single mindedness of this follow through which makes me think that the thing chasing Darrin on the upper levels is from a different species. When Reid and Jelena come face to face with the famous, stereotypical Grays (presumably still from Zeta Reticula?), they are revealed to be just empty suits with zippers. One wonders who wears these suits... the handlers for the aliens or, I am guessing, the aliens themselves when they leave the base? They then come across some kind of machine which looks like a way of feeding blood to whatever is on the level below. When they reach that level they get chased out by half glimpsed things but then they escape through a pipe into a series of white rooms where Jelena is frozen in place and floats away. Reid gives chase, finds her and then they are both floated up to... an alien ship? Meanwhile, Darrin manages to just about escape with his life to the car but then... more of the same kind of thing.

The thing for me though, was that the hierarchy of that descent does, as I said, suggest a certain logic and a system put in place by both aliens and government working together... although the thing pursuing Darrin definitely is not something anybody wants loose, again giving credence to my theory that we are not witnessing just one alien culture at work here.

The whole film is done with 'shaky cam' style shenanigans, as you would imagine, but the sound design of the thing also nicely supports the effect of what the director is trying to achieve here... which is obviously to scare the pants off you. The general hubbub of the young protagonists reaches epic heights of noisy banter at some points, even when they are trying to stealthily sneak into Area 51 and, at first, this all really irritated me. That was until I realised that the director was using it to heighten tension through its absence in certain scenes... so when he wants to push the level of suspense right up to eleven, so to speak, everybody quietens down and we are left with one of the multiple camera viewpoints and whatever ambient sounds are put into the foley.

This is quite effective and, possibly, a natural thing to do anyway but he does it to a level where the polar opposite, when the kids are constantly talking, is something I would liken to being the audio equivalent of a director concentrating on the people in a shot and then, suddenly, shifting focus to concentrate on a small detail. It’s probably something done with sound design in a lot of movies and, certainly, there’s usually a slight ambient highlight like a low level hiss or some such effect whenever something is going to get scary when these kinds of found footage style, first person POV films are released. Maybe it’s because the tension in the room as I watched this was at the point when I was especially conscious of everything that was going on in the sound spectrum for the film. Either way, it sure was effective for me, I can tell you.

And that’s me done with Area 51 methinks. A somewhat maligned film in terms of its having no proper cinema release and something which I would have really enjoyed on a large screen, I have to say. At least I’ve got to see it now so I’m able to say that anybody who is a horror fan and into streaming films via Amazon and the like, should maybe have a look at this one while it’s available. It’s not the best of these kinds of films, for sure, but it certainly isn’t anywhere near the level of the bad ones and I found it a lot more effective than some of the movies of this nature released in cinemas these days. Give it a look sometime... you may find that it’s pretty good.
Posted by NUTS4R2 at 12:10