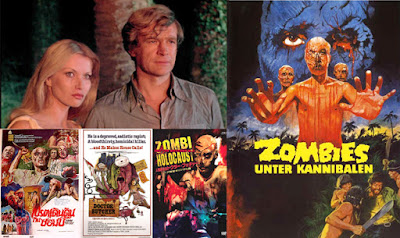 The Eat Is On

Warning: Some spoilers in here.

So here we have the problematic “not quite made it onto the Video Nasty list back in the day but we’re going to seize your copy and take you to court for having it anyway” movie Zombi Holocaust... in a Blu Ray transfer from 88 Films. Now my first problem with this is that it’s Region locked... so big bad mark for 88 Films to giving in to the whims of the copyright holders (at a guess) and withholding the accessibility of art from various global markets... something that borders on the political definition of discrimination, as far as I can make out. Not a problem for me as I live in that zone anyway and I was just prompted to switch back to my own region on the player but.... big problem for 88 Films, I would say, due to their initial player rejection screen, which reads as follows...

“WARNING. I’M SORRY, YOR BLU-RAY PLAYER IS NOT COMPATIBLE WITH THIS DISC.”

Really? Are yor sure? Yor blu-ray player?* Really? This statement is quite wrong on a couple of levels but they really ought to at least proof read these for spelling before they just throw them onto the discs like that. Perhaps they think people in multiple zones wouldn’t be trying to play these discs and therefore wouldn’t see the warnings but... honestly? If you’re even remotely into movies and, especially with a title like this where you might have to shop around globally for an uncut version, then why wouldn’t you have a multizone/multiregion player? Movies are for everyone.

Okay, so one of the reasons I wanted to see this is because Ian McCulloch, the British male lead of Zombi (aka Zombi 2 aka Zombie Flesh Eaters - reviewed here) and Contamination is in this and it’s the only one of his “Italian horror trio” which I hadn’t previously seen. Since those films all date from 1979 and 1980, I’m pretty sure he must have shot these more or less back to back and, certainly, this film seems to share the same locations/sets as the 1979 Zombi. It wouldn’t surprise me if some of the scenes shot for this, especially the locations in New York, were filmed on the same days too but... maybe not, since the directors aren’t the same. But I wouldn’t completely rule that out. Dakar from Zombi is also in this one.

The other reason I wanted to see this, naturally, is because I already had the Nico Fidenco score on CD and so I wanted to see, as I usually do, how the music fits the picture. Well, on that count, it’s mostly appropriate... not the most outstanding score I’ve heard but it’s perhaps a little more subtle than you might expect from such movies in places and, although it’s not as cool as the music from those other two I mentioned (by Fabio Frizzi and Goblin respectively), it fits right in with the kind of soundscape you would expect from these kinds of pictures.

The film starts off with a static shot of a New York skyline held for the entire credits followed by an unknown, shadowy figure entering a hospital morgue, performing a hasty amputation on a dead man and then stealing the hand. Another such gory ‘theft’ involves the must be heard to be believed, truly most amazing dubbed fake scream that I’ve come across in a long time, from one of the nurses. This scream must be able to literally raise the dead because, although the innards of the cadaver are all scooped out and stuff, the guy playing said cadaver still manages to blink a couple of times when he imagines the camera has stopped shooting the scene.

Later on, Lori Ridgeway (played by Alexandra Delli Colli), who is an expert on natives in a certain Caribbean island, is suspected by a reporter called Susan Kelly (played by Sherry Buchanan) to be the person behind what has quickly become a whole series of body parts gone missing from the hospital. However, we suddenly learn the culprit is a hospital assistant... who is eating the bits he stole to maintain his homesick cannibal lusts. The doctors and other hospital staff try and corner the guy but he decides it’s better to hurl himself out of the window, many stories up. We then get a shot looking down as he falls but... he seems to have been magically transformed into a plastic dummy. I know this because, when he falls, his arm flies off to the right of the screen due to the impact. All is saved, though, when we get a close up of the actor, post fall, and his arm is once more firmly attached at the shoulder. These cannibals must, indeed, have mystical talents.

Anyway, along comes Ian McCulloch, playing Dr. Peter Chandler, and his assistant, who are some kind of health inspectors with government sanction (and firepower to back it up). After Lori’s house is broken into, to steal a native symbol with some kind of connection to the cannibal thefts which are just one crime in a series of similar cannibal related cases on Chandler’s files, both Lori and Kelly are recruited to accompany Dr. Chandler and his team to find the island of the cannibal tribe and see what’s up... for some reason. I don’t quite know what they think they’re going to do when they get there but... hey, I guess you just have to suspend your sense of logic along with your disbelief when you’re watching this kind of stuff.

When they get to the island, of course, they are met with friendlies who turn out to be not so friendly, cannibals, treachery and... the odd zombie or two. Yeah, there are some creatures who are technical zombies in this, although they’ve actually been “Frankensteined up” to get them into that state... one of the alternate titles of this movie is Doctor Butcher, in reference to the “mad scientist” played by Donald O'Brien. The film is quite gory and, it’s no wonder it nearly made ‘the list’ in the absurd Video Nasty scare of the 1980s... but there’s not a great deal going on with this film, especially in comparison to Fulci’s Zombi, which looks like the absolute classic it’s often lauded as, in comparison to this one.

That being said, they do try their best with some of the camera set ups and the set dressing on Lori’s boudoir in one of the pre-requisite “get yer kit off” scenes has ‘horribly matching everything’ in it... wallpaper, sofa and pillows on the bed all done in exactly the same pattern design... I’m not sure I’d be able to live with that character if that’s her best sense of interior decoration.

The other thing that lifts this film, just a little, is the slightly unexpected nature of the end sequence... when you think everyone is done for. Dr. Chandler is trying to get himself free from the straps on Donald O'Brien’s ‘operating table’ and he does so but gets in a fight and doesn’t look like he’s going to make it to the end of the movie after all. However, in an earlier scene, Lori was snatched by the cannibals and painted up by them... similar to the way Ursula Andress is painted up in Mountain Of The Cannibal God (reviewed here) but with a nicer sense of design as her naked form gets only slightly adorned with graphical flowers. As she is about to have a dagger plunged into her on the sacrificial table, the table shifts weight and the natives see this as a sign that she is to be spared and, presumably, worshipped as some kind of naked, blonde Godess because, when we next see her, she is rushing in to the mad Doctor’s shack with her cannibal allies to rescue Ian McCulloch so he can survive the picture after all. Not much happens after this and the film very quickly comes to an abrupt end... leaving you wondering just what the hell could possibly happen next... but that’s okay, I think I’d spent enough time in the jungle with this one and was happy to come out of it.

This film is watchable but it’s certainly no classic. If you’re into Italian zombie or cannibal films (the latter of which this one seems closer to in terms of content) then this one shouldn’t let you down... but I must say I prefer films like Zombi or even Nightmare City (reviewed here) to the likes of this. Still, an essential watch if this era and genre are your thing... just don’t expect to be as entertained as you would in other, similar movies... there are a few better ones out there, I think.

*Or possibly Yor, The Hunter From The Future
Posted by NUTS4R2 at 19:04