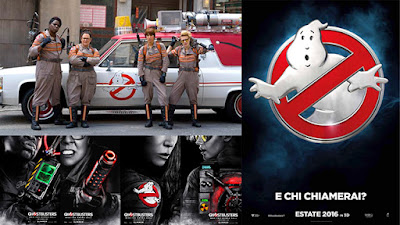 Hmmm... so where to start with this thing?

Maybe at the very beginning...

I remember when I was a 16 year old back in 1984 when the original Ghostbusters movie came out. I think it was true to say everyone went to have a look at it and that it very quickly became a cultural phenomenon. I remember I went to see it, not because of the articles about the production in magazines such as Starburst and Starlog, but because of Ray Parker Jr’s hit pop song written for the movie. It captured everyone’s toe tapping molecules and it was the first actual pop single, albeit in 12” remix form, that I ever bought. Even as a young ‘un I was more into orchestral scores than I was dumb pop songs but the instrumentation build up on the Ghostbusters song was pretty good and it was even infectious enough for my parents to come and see the movie with me.

As it was... the original Ghostbusters movie was... well, it was okay. An entertaining enough time but certainly not good enough for me to repeat view it at an age when repeat viewing was what I did when the movies were good enough to warrant it. I also remember how everyone was stoked for the inevitable sequel, the imaginatively titled Ghostbusters II, a few years later and... you know... how amazingly terrible that second movie was. So no matter what my criticisms about this movie are, just remember one thing... it’s not as bad as Ghostbusters II.

The new Ghostbusters movie is a gender swap affair, much like the 2007 film The Invasion, which was a gender swap remake of Invasion Of The Bodysnatchers. In this movie, the role of the four Ghostbusters are replaced by actresses Melissa McArthy, Kristen Wiig, Kate McKinnon and Leslie Jones while the ditzy secretary is played, with a genius amount of stupidity, by Chris Hemsworth. Now, for some reason, this provoked a lot of outrage from various quarters who seemed to think this was some kind of new or bizarre thing to do but, seriously, it’s not really a problem. That being said, the movie certainly does have a big problem which I’ll come to in a minute.

The film is actually not a sequel to the original movies, which is kind of a missed opportunity as far as I am concerned although I do take the director’s point that it works better as an introduction to the characters if the people of the world depicted in this one don’t actually know of the proven existence of ghosts. So I’m coming around to the idea. But this isn’t my big problem with it and... oh heck. I can’t keep skirting the issue here so I’m going to come right out and say it.

The biggest problem that this movie has is that... it’s just not funny.

Which is a huge hurdle for me... especially when, on every other level, it seems to succeed brilliantly in bringing all the coolest ingredients together.

For instance, the pacing and the little, inventive surprises, such as the origins of the Ghostbusters logo in the subway (which you kind of see coming but it’s a fun moment when it happens), are everything you could hope for in the inaugural movie of a renewed franchise... and I really wanted to like this film. The way the whole thing is structured and the way it leads the audience along, one step at time, until you get all the right elements in place, to say nothing of the many cameos from almost all of the main 1984 cast members (stick around for the various mid-end credits and post credits scenes folks), is nothing short of brilliant and things keep moving in a way that gives you so much more than just an empty frame of a script with a few set pieces hanging on it.

And the actors playing the main leads are great. McArthy, Wiig, McKinnon, Jones and Hemsworth are all perfect, with a special shout out to the amazing job Kate McKinnon does in her role. And the chemistry between the actors is just awesome with their ability to deliver quickfire dialogue in perfect timing almost reminiscent of The Marx Brothers back in their day. However, like I said, it’s just not that funny.

It’s the dialogue itself which is the real culprit here because, as I said, the structure, pacing and everything else is just perfect (and, for the record... my parents loved this reboot too). The dialogue just rarely had anything resembling a joke in it which was even good enough to make me smile a little. I occasionally cracked a half grin at the odd in-joke or reference but... yeah... this was not the mirth making experience I was expecting it to be. Which is a shame because I was really hoping this new movie would be good, if purely because the idea of making the central cast four females was so criticised by a large proportion of the male population. That being said, of course, I’m already getting a feel that the box office on this thing is going to be huge and I’m guessing that, just because I didn’t personally find it funny (much like I didn’t find the original all that funny, to be fair), it doesn’t mean a lot of the cinema going audience are of a similar opinion. There were three young ladies in the same audience as me who were absolutely lapping it up in the most vocal way possible (making me wonder just what the hell I was missing, to be honest). So I think there’s a lot of scope for a franchise here and I’m pretty up for seeing a second movie because, like I said, the chemistry between the main cast was awesome and they just need to get to perform some funnier dialogue and they’ll be away.

So would I recommend the new Ghostbusters? Tough one. All I can say is that I really didn’t think much of it as an entertaining time at the movies but I suspect I’m probably in a minority on this one. So if you like the idea of the main premise then I think you should seriously consider plonking some money down for this one. It’s got a lot going for it, even if I personally found it to be not quite to my taste. So maybe it has more than a ghost of a chance, at least, with the target audience.
Posted by NUTS4R2 at 18:57