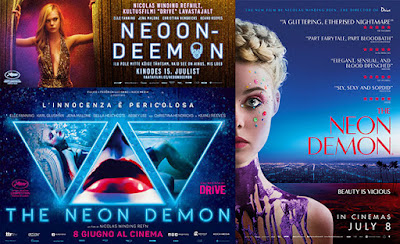 Okay... so I was not too impressed with the other Nicolas Winding Refn movie which I saw a few years ago called Drive (which I reviewed here). I haven’t been too keen on reuniting my acquaintance with the work of this director but the publicity surrounding this latest movie by him, the references to the influence of Mario Bava in his work and the fact that this one was “Booed!” out of Cannes sounded like this might be a promising movie. Well, in some ways I suppose it is but, like my previous experience with his work, it seemed like this one was a visual feast of a candy shell, protecting an empty centre of absolutely no substance whatsoever.

The film is a hard look at one young model’s rapid ascent in the modern fashion photography industry and the consequences of that astonishing progress on her as the film plays out towards its, almost inevitable, conclusion. I say inevitable because once you meet the various characters in this film, one of the things you will notice is that they all stay perfectly on track to fulfil the kind of single minded stereotypes they already inhabit at the start of the movie. There is no real character progression, it seemed to me, and although the conclusion is a slightly different presentation of the logical destiny of the central character Jesse, played by Elle Fanning, it’s certainly nothing new and I think the influences the director so blatantly likes to wear on his sleeve are a fair match for the nature of the ending.

The film has been promoted as some kind of horror/thriller film and the title of The Neon Demon certainly does a lot to support this kind of perception of it but I think, at the end of the day, this is quite misleading and if you are expecting that kind of movie (which I wasn’t, as it happens), then you may be a little disappointed with it. I’ve already mentioned Mario Bava being cited as a key influence but I think Refn is very much influenced by the Italian giallo genre as a whole, on this one (my personal take on the Italian Giallo movie can be found here), and the stupendous shot compositions on display here, with washes of intense colour pitched against each other with very meticulously crafted designs, certainly owes more than a little to various gialli over the years. That being said, in terms of the actual story content, it is in no way a parallel for the highly saturated mystery thrillers that defined that genre and, again, I really don’t think people will be that impressed with the lack of plot on show here.

The way Refn splits the screen off into vertical slabs of colour and space to highlight his players within the frames and leaves large areas of the shot without any people in it, sometimes focusing on empty space completely, rather than following the actors when they walk off the screen, certainly hits some of the stylistic traits of both ‘the cinematic giallo’ and a European sensibility to film-making in general. And, of course, combined with the deep reds, purples and greens which pop out of the screen at you, even from the fantastic opening credits, the whole effect seems to be borrowed or copied from a mid 1960’s to mid 1980s Italian mindset. Contrasted with the almost 1950s pastel colours he uses when the main protagonist leaves her professional environment and returns to the shabby motel run by Keanu Reeves’ character.

Even the actor who plays Jesse’s ‘boyfriend’, Karl Glusman, bears a striking physical resemblance, in my mind at least, to Antoine Saint-John who played the title character in the splendid giallo movie The Killer Must Kill Again. And without trying to give away too much about what happens in this one, the content could be likened to the conclusion of a movie which is very often mistaken for being an Italian giallo, but which isn’t really one itself. That film being The Perfume Of The Lady In Black (aka Il Profumo Della Signora In Nero... which I reviewed here).

Of course, given the somewhat plotless subject matter on display here, I would imagine the director could quite easily defend his art here (and it certainly is ‘fine art’ the way the camera and cinematic palette is wielded on this one) by pointing out his product is as shallow and vapid as the profession he is focusing his lens on but... nah! I don’t think I’d personally want to let him off the hook with that one. What he does shoot, though, is astonishingly beautiful and he has particular visual fetishes on display here which take on an almost obsessive quality throughout the film. For instance, he uses a lot of mirrors and reflective surfaces which allow him to further craft clever compositions involving those split sections while simultaneously enhancing the agenda of vanity and obsession with physical beauty in the world of fashion photography.

Another thing he does is that he seems to be able to intensify and capture a bizarrely drugged out quality with the majority of the character’s eyeballs, specifically of the actresses playing the fashion models, which drove me crazy trying to figure out how he lit his subjects so brightly while still having their peepers fixed and dilated... contrary to the laws of physics. One wonders if a lot of the actresses were wearing contact lenses. One also wonders if this signifies certain potential supernatural properties to some of the characters. Again, I don’t want to get too literal here because I’m trying not to post spoilers on this but, the relationship that make-up artist Ruby, played absolutely brilliantly by Jena Malone, and a few of the models have with Elle Fanning’s Jesse character make you wonder if the central protagonist’s final fate is pre-ordained from the first time Jesse meets Jenna, or if her ultimate expulsion from her safety net was prompted merely by a knee-jerk response to something she does near the end of the movie.

One also wonders if any of the characters in this movie are a direct metaphor for Elizabeth Bathory, perhaps, who has been portrayed in many ways in many movies over the years.

However, one of the things I will credit the director for is his willingness to create an open ended atmosphere, especially in the aftermath of a certain scene near the finish, which neither confirms or denies the potential for an almost supernatural taint to the proceedings on show. My personal conviction is that the very last few minutes of the movie, while pushing the potential of an other-wordly enhancement to some of the characters, almost immediately frustrates it again by the actions of another character, after one of the central antagonist’s self inflicted demise. However, I’m sure it’s something people will have a mixed response to.

As for me... well, the movie looks absolutely gorgeous and, due to the score provided by Cliff Martinez, sounds gorgeous too. The lack of a real plot or story to the movie, especially when the central characters are so wonderfully brought to life by the main actors (including the wonderful Keanu Reeves in a what I thought was a fairly brave role for him), is not usually anywhere near a problem with me and I often prefer those kinds of films which don’t have a real tale to tell... but this one, for some reason, did feel quite empty and I found that, although I was certainly entertained by the look and feel of the movie, I was less than happy with the resonance of the final product, haunting as it is, in some respects. It’s not one I’d particularly recommend to people and I’d have to say the outrage it’s provoked in some quarters seems bizarrely out of kilter with the ‘nothing new here, move along’ quality of this film and just forces me to conclude that the people who express such notions are sorely lacking in their appreciation of cinematic history. At the end of the day, there’s nothing really surprising or eye opening about The Neon Demon and I would only go to see this one if you are an ardent fan of style over substance.