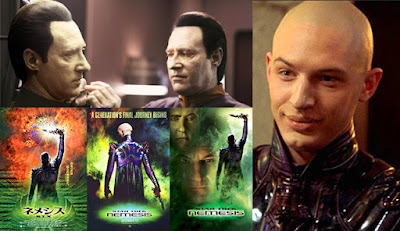 Warning: This one has spoilers.

And here we have the franchise killer.

Star Trek Nemesis is the last hurrah for the Star Trek - The Next Generation crew in the film series... so it’s kind of a pity it’s such a terrible movie. I remember when this came out and having high hopes for it... then walking out of the cinema kind of numb and indifferent to it. More like Star Trek Numbesis. Certainly with no desire to go back and watch it again.

I can’t totally pin down why this movie is so ultimately dreary because the story certainly feels like a Star Trek story, although the addition of a supervillain who is a partial clone of Captain Picard thrown into the mix is really something I could have done without, to be honest. It’s a shame because I really paid no attention to that particular character, Shinzon, when the movie was first released. I just didn’t like him and it’s only now that I’ve rewatched the movie that I realise it’s an early appearance, in a very prominent role, for Tom Hardy, who now, pretty much, has superstar status in Hollywoodland. I have to say that, looking at what he did here, he certainly gave it his all and gives the kind of performance I would expect him to be able to give but... it’s just a badly conceived and written role. That’s the real problem, I think, with this character.

Another problem with the movie, and I think I might have touched upon this in my review of Star Trek Insurrection (reviewed here) but it’s even more noticeable here, is that for a television show that invested a lot in being more of an ensemble collaboration with the various actors portraying the Next Generation crew members in equal amounts, this movie really does become the ‘Picard and Data Show’ for the majority of the running time. Most of the other characters don’t have a heck of a lot to do in this one, with the exception of a brief sense of closure in that Deanna Troi and Commander Riker (Marina Sirtis and Jonathan Frakes) finally get to tie the knot and are heading for another marriage ceremony on Betazoid... Troi’s home planet. Of course, regular viewers will know that marriage rites on Betazoid involve the entire congregation being naked and, to be honest, I think I would have much rather seen a movie about that than what we’ve got here.

The story is pretty much centred around Picard and a plot by the Remans (the brother race to the Romulans... oh, right, a Romulus and Remus joke, finally) to destroy various... um, blimey. This is how good this film is... I only watched it a few days ago and I’ve already forgotten the actual details of the villain’s fiendish plan, other than he needs Pickard’s blood to prolong his own life. However, the plot starts off early with Picard, Worf and Data looking for the scattered pieces of an android with a similar positronic brain to Data. They find an identical version of him, a prototype double played by the same actor, Brent Spiner, and they start rebuilding him on the Enterprise. For some reason, the producers chose not to use the already established identical android Lore from the TV show in the plot, which would have made more sense but which might have been too complicated and involved to sum up quickly for a stand alone audience.

However, anyone who had already heard the rumours would have realised at this early stage in the film that the producers of the film series are hedging their bets, trying to have their cake and eat it at the same time because, just like Star Trek II - The Wrath Of Kahn saw the death of a popular character (only to have him brought back in the very next film - my review of that one is here), so too, does Star Trek Nemesis. Namely the death of the very popular Lt. Commander Data. Spiner had already wanted to die in the previous Star Trek film, Insurrection, but this time he gets to go. However, presumably because the wiley producers wanted to ensure a way to get the character back after waving a big enough pay cheque, they have introduced here a duplicate in every way, apart from in memory. Since Data’s memory is downloaded into said android in this one (as a mask to the audience of finding a way of turning around a plot predicament posed in this film), it would be easy to have the former personality take over in the next movie, I’m sure, if this film proved popular. My understanding is that, this indeed was more or less the plan for the proposed sequel but, since this one badly flopped at the box office (in comparison to any of the previous films), that sequel never materialised on our screens.

Having said all this, though, there are a couple of nice things about the movie. Such as the Troi/Riker scenario, for example. And the fact that when the ‘away team’ go to the alien world to put together the android left to them as bait, the director plumps for using a different kind of film stock (presumably) and filters to give that whole section of the movie a much different feel to the rest. Also, the two handers between Tom Hardy as Shinzon and Patrick Stewart as Picard are kind of interesting... just not really something that does the pacing any favours when you put the thing together. Good, interesting acting doesn’t necessarily mean you get a good final product.

But other than those things... yeah, not much going for it. And that extends to the scoring too, I’m afraid...

This was Jerry Goldsmith’s final score written for a movie (although I believe the film didn’t materialise as his last at the cinema... just the last one he actually wrote). I remember the press release at the time from Varese Sarabande records, the label that has put out the majority of the Star Trek movie scores in recent years. They promised a Jerry Goldsmith score that harkened back to the days when he was at the height of his powers (some of us believe he never really left those days... styles change and that’s not a bad thing), comparing this score to his original compositions for Star Trek The Motion Picture (reviewed here). So everybody was pretty ramped up to hear this thing and, when we finally got it, well... it’s a drab score, to be honest. At least the presentation of it on the album at the time of the film’s release certainly was. There was an expanded edition released a few years ago and this is somewhat better but it doesn’t mask the fact that this is definitely the least interesting or engaging Star Trek score that Goldsmith wrote for the franchise. Not a good one to go out on and I’m always saddened that this was the last thing he wrote. But, as always with a Goldsmith score, very appropriate to the movie on screen and supporting it the best way that a composer of Goldsmith’s status could support it. So maybe the drab film spawned an appropriate score... is my guess. We don’t even get to hear Goldsmith’s Klingon theme quoted in this because, frankly, Worf doesn’t have much to do here... which kind of says it all, I think.

What with this and the fact that the writers nearly destroy the Enterprise, once again, (that old crutch) this feels like a Star Trek movie that’s constructed from dramatic moments of its past. Very formulaic and lacking any real substance to the story, such as it is. They even give Captain Janeway from the TV series Star Trek Voyager a cameo (guess that means they all got back to their own universe then... never did see the later seasons of that show), after Jerri Ryan, who played the partial Borg character Seven Of Nine, twice refused a cameo in this movie.

It’s kind of remarkable, then, that after seven years had passed, J J Abrams was able to reboot the franchise, following on from the same timeline but going back to the past and changing the future via the inclusion of Leonard Nimoy as Spock. Those movies are both the past and future of the Star Trek franchise as we know it now... and they seem to be doing a pretty good job so far, although the trailer to the new one, Star Trek Beyond, doesn’t look great, to be honest. You can find my reviews of Star Trek 11 (one of my early ones so please be lenient) and Star Trek Into Darkness here  and here. As for Star Trek Nemesis... not a great film for the Next Generation crew to end on and not a good jumping on point, either, if you’ve never seen a Star Trek movie before. This movie really isn’t a whole lot of fun... you have been warned.