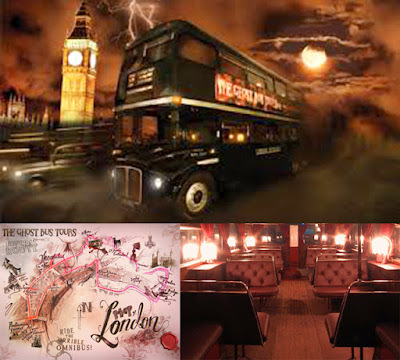 Who You Gonna Call?

Just a quick shout out of a review to the guys and gals, actors and actresses of The Necropolis Bus Company...

Just recently, I found myself staying with a friend in the heart of our country’s capital and one of the escapades we were booked up for was the local tour of this spook themed sightseeing trip, The Ghost Bus Tours. The company in question also hosts similarly themed tours in both York and Edinburgh but I can only speak out for the London version of their spooky shenanigans.

The bus departs promptly at an agreed time in Northumberland Avenue, just off Trafalgar Square and, to save disappointment, you may wish to visit their website and book your seat... you can click on the URL at the bottom of this review. The very bus on which my companion and I found ourselves seated was the lone survivor of a 19th Century Private Funeral Bus service. Due to some bizarre circumstances involving a fire in 1967, which I won’t spoil for you here but which you will find is the subject of a dramatisation on the bus itself, this vehicle itself has its own spooky history and its painted up in the original colours with railway like seating inside and with its own internal lamps and black curtains. Both lamps and curtains come into use at some point on the trip but... you know... I really don’t want to spoil this one for you.

The actor playing the conductor is there to give you a fascinating, guided tour of the haunted hotspots of our fair city and, along the way, he provides more than his fair share of horrible stories which is deftly countered by a comedic tone throughout.

Now, if you’re purely a fan of sophisticated humour and clever witticisms with your travels... this is probably not the tour for you. It has to be said that the majority of the jokes and quips which the conductor comes out with are... I’m delighted to say... real groaners. It makes the trip fun and, although there are some slight scares to be had along the way, these aren’t much that many people couldn’t handle and the emphasis is way more on the comic approach rather than scares. The spooky stuff, which happens as a dramatisation when the conductor is interrupted by the living or the dead, is communicated through a video screen in the top and bottom decks and, also, lighting and sound effects. This communication system also helps convey the drama/humour of the situation should you happen to notice... and it’s pretty hard not to... when the bus picks up the odd, unscheduled customer, for the evening.

As the bus makes its way through the traffic, the conductor points out the sights of London’s most haunted structures and, if you are a complete stranger to London, then you will probably find this extremely handy. A whole host of important buildings and landmarks such as New Scotland Yard, The Old Bailey, The Bank Of England, Lyceum Theatre, The Monument and even the statue of King Charles the First riding a horse which marks the very centre of London, are all pointed out on the trip... amongst many other fascinating and little known locations. Not to mention some beautiful views of London sights such as St. Paul’s Cathedral, Tower Bridge and The Tower Of London. So if you find yourself a complete stranger to our fair capital, it might be worth starting your holidays by taking this ghoulish but fun little trip to give yourself a quick overview of some of the more traditional places you could visit on your stay.

One thing I will say, which is not a criticism but a mild caution, is that some parents may find the graphic descriptions of death and torture mentioned... with a fairly comical delivery, to be sure... something the younger passengers might not be ready for. Similarly, there’s a lot of adult humour in the double entendres and such like used by the conductor - for instance, when referring to going down the rear passage or when talking about the ghost in Cock Lane. All that being said, though, there was a little girl who looked to be about seven or eight years old on the tour when me and my friend rode the bus and she seemed to be having the time of her life. I’m pretty sure the more ‘adult humour’ would have been going over her head and, as far as the morbidly graphic descriptions were concerned... well I guess some kids just like that sort of thing.

The tour finishes with a very mild but entertaining form of audience participation (no, don’t worry... you won’t be singled out to specifically do anything) and, although it’s a pretty cheesy and over-the-top ending to conclude the full, behind-the-scenes story of the bus itself... the tone and the skill of the actors who never once break character make the whole thing just about palatable and, I have to say, I and my companion had a thoroughly good time on the warped but highly entertaining Ghost Bus Tour, which lasts approximately an hour and a half, depending on the density of traffic (I would guess).

If you want to take a look at a promotion for the bus tour and book yourself a ticket, then look no further than this website, www.theghostbustours.com or ring them on 0844 5678 666. If you are of the personality type that enjoys a good laugh involving brushes with the grim reaper and the trail of spirits that walk the earth in search of eternal peace, then this is a nice alternate to the regular kinds of sightseeing bus tours you will find on offer in the City of London. So, who you gonna call?
Posted by NUTS4R2 at 19:11