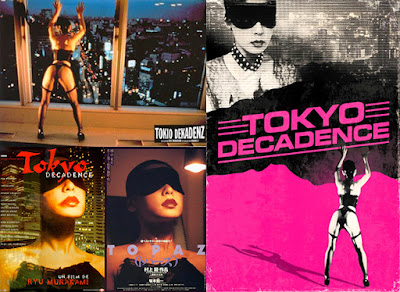 Warning: Slight spoilers in here...
or at least an indication of a lack of them.

Tokyo Decadence is written and directed by Japanese novelist  Ryû Murakami and based on some of the short stories from one of his collections. I’ve not read any of this guys books (who I believe is no relation to famous novelist Haruki Murakami, who I like a lot) other than one by him called In The Miso Soup. I remember that book being quite raw in terms of its subject matter and, because of this, I guess I was expecting a little more edge to Tokyo Decadence than I found.

My prime reason for wanting to see this movie... asides from the obviously raunchy sexual content implied by both the title and the cover art... is because the film stars Miho Nikaido as the main protagonist. Miho Nikaido is, or possibly was (I’m never quite sure) the wife, or possibly just long term girlfriend, of my favourite living director Hal Hartley. I used to watch her in Hartley films such as Flirt (the first one I saw her in at a London Film Festival screening some years ago), The Book Of Life and Henry Fool (among others). She’s always been an actress whose work I respect, admittedly due to her being in films I love so much, and I knew that, if nothing else, she would certainly be able to carry whatever film she starred in, if necessary.

We see Ai tied to a leather, adjustable chair. She is then, much to her anxiety, injected with something by her client. Once that is done she is blindfolded and gagged and then the man she is with does something to her off-camera, after taking his upthrust foot in his hand. We cut to a close up of Nikaido’s face as the blindfold and gag are taken away from her and we see her glazed and possibly uncomprehending expression as the shot is held and she discovers the reality of her situation, which is...

Okay, this is where it gets kinda strange as far as I’m concerned because the film then cuts to the opening credits sequence of Ai travelling the Tokyo streets. Since the tension created so skillfully in that first sequence was ratcheted up to an almost unbearable level, my immediate reaction to this was... oh, okay, so the rest of the film must be in flashback leading up to this moment and they’re going to reveal what happened at the end of the picture. Which is one of the main things that kept me interested in the film, to be honest.

Okay... I’ll come back to this a little later.

The shots of Ai travelling the streets of Tokyo at night in this are little visual gems of clinical menace, it has to be said. Everything seems blue lit and claustrophobic, the camera taking in the panorama as Ai silently observes the oppressive urban culture around her. It actually got me thinking, as I was watching, of the early cinema of David Cronenberg in the way it evokes a blue and washed out sense of hopelessness and, I have to say, that whatever else you might conclude about this film, you’d have to admit that it is, at least, deeply expressionistic in places.

For the rest of the film we follow little episodes of Ai’s daily life, mostly her encounters with various BDSM clients and I can only assume that each little vignette is culled from a different short story in Murakami’s source book. A really charming starting story, however, has Ai visiting a fortune teller who tells her she must do three things to avoid harm. 1. Place a telephone book under her television set, 2. Avoid any art galleries in the East and 3. Buy a pink, precious stone and have it made into a ring which she must wear on her middle finger. Of course, this scene is useful in two ways... primarily as an indication of Ai’s superstitious and wide-eyed innocent nature but, secondly, as a small plot device to almost get her into trouble when she goes back to a hotel room after leaving it behind... following an encounter with a particularly taxing and stern client and his girlfriend.

Actually, there’s a wonderful shot in this long sequence with her first post-credits client. She is on all fours in front of a mirror with a vibrator tied between her legs and her client is plunging in and out of his girlfriend, who is in a similar position behind Ai, playing with her as he does this. However, the reflection on the mirror is angled perfectly so that the client’s girlfriend is hidden by certain foreground elements and so, while we see this on our side of the mirror, the reflection makes it look like the gentleman in question is fucking Ai himself... which is a pretty impressive bit of camerawork, as far as I’m concerned.

The film is quite tame in its pervery, for the most part, but the way it's shot and the protracted nature of the sequences, much without dialogue, gives it a certain dark weight in places that you wouldn’t expect from this particular aspect of the modern BDSM scene. A lot of the shots are static set ups which also give it a more voyeuristic feel in certain scenes, although this is not an exclusive set of artistic decisions and there are plenty of shots where the camera roams a bit more freely. There’s also a lightness to certain sequences too, including a scene where Ai and another woman are doing a double domme session with a guy who likes to be strangled and they think they have accidentally killed him... until he regains consciousness and scares them both.

There’s a big tour-de-force acting sequence near the end of the movie where Miho Nikaido’s character takes a pill that a rich dominatrix gifts to her to give her Dutch courage as she goes through the streets under the influence of the drug, bottle in hand, and searches around for the address of her ex-celebrity boyfriend. Nikaido is pretty amazing in this, as she always is, and the whole sequence kind of reminded me, a little, of a kind of modernistic turning point in her life, similar to the less volatile but probably more potent ‘man with a sack’ sequence from Fellini’s excellent movie Nights Of Cabiria (reviewed here). It’s an interesting part of the narrative to end on and, frankly, the fact that the film does end on this sequence is what annoys me the most about this film...

At no time do we return to the truly powerful opening scene of the movie. Was this scene in Ai’s future or past? We don’t know. Do we know what her client did to her? We do not. It doesn’t come up again and I found this almost artistically criminal, in some ways, that the writer/director never returns to bring closure on this powerful opening set up. I could understand it if he’d given us a reminder of the scene and then refused to disclose what actually happened... that would have been a valid aesthetic choice and I could respect it. Here, though, we are just distracted away from the memory of the sequence all the way through the film and, in the end, it just wanders off into the closing credits. Very disappointing, as far as I’m concerned.

Ultimately, for all its good acting by the lead protagonist and some interesting shot designs and slick atmospheres evoked by the director, I wouldn’t be prepared to recommend Tokyo Decadence to a friend. It’s not something I feel I could revisit anytime soon but I am, at least, glad that I saw it. Another good thing is that it at least treats the BDSM scene in a, mostly, respectable fashion so there’s that but... no, not nearly as entertaining enough as indulging in the real thing. Maybe give this one a miss and use the cash you save to try something new instead.
Posted by NUTS4R2 at 19:00