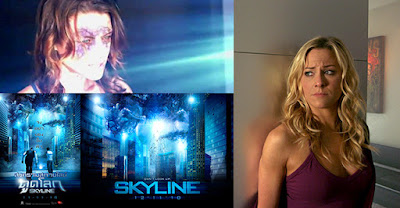 Warning: I really feel I need to talk about the end of this movie so... yeah, some obvious spoilerage in this one. There will be another warning before it happens, though.

Well this is a bit of an interesting one. I missed this movie at the cinema and I think it got into trouble from having a similar theme to Battle: Los Angeles (which I loved and reviewed here) when it was released, because one of the directors worked on the effects for the other film.  That being said, I can see why they maybe didn’t get too far with that legal action because, apart from the 'aliens in a city' commonality, it’s a very different kind of movie, especially when you get to the end.

It’s actually a very low budget movie but you wouldn’t at first, know it to look at it. It had, at the time, more visual effects shots than most Hollywood blockbuster movies of that period and it’s not bad effects work... very good, in fact. However, although I knew next to nothing about the film before I watched it, as the movie wore on I began to figure out that the budget must have been quite small because, for the most part, it’s all filmed in one building... comprising two apartments, some stairs and corridors, the rooftop and a parking bay. There are a few other very brief scenes which take place in a pool (of the same building and the interior of a plane but... that’s about it). Oh... and the special effects shots of aliens and so forth riddling the skies of LA... which is pretty great looking in terms of that kind of thing, I have to admit.

The film starts off with a teaser of the main male antagonist Jarrod, played by Eric Balfour, about to get ‘snatched’ by an alien creature before jumping to fifteen hours earlier, showing him and his wife Elaine, played by Scottie Thompson, arriving in LA to visit Jarrod’s rich and successful friend Terry (played by Donald Faison) on his birthday. They go to a party and they are all sleeping in the same apartment suite when... we catch up to the pre-credits teaser and the aliens arrive and start snatching up loads of people in order to carry out their nefarious plans.

Pretty much right from hereon in, the film becomes about a small group of people trying to survive without being discovered by the aliens who, it would be fair to point out, seem fairly invincible throughout the movie. This includes, of course, all the stupid ‘shall we stay or risk making a break for it’ kind of arguments with the usual male ego stuff getting in the way of the more rational plans. So, yeah, the usual minor friction punctuated by some suspenseful scenes and some pretty cool special effects sequences throughout.

Now, I have to say that, for the first half of the movie, I found this film to be quite gripping. I was on the edge of my seat more than once and, although another person watching this with me found it irritating from the get go and opted to stop watching, I thought the build up in ‘alien invasion terror’ was quite well done and maybe suspect that the film-makers really didn’t need to opt for having the teaser scene in at the start at all... seeing how it automatically negates the usual dramas going on with the character development because, as an audience privy to what’s going to occur, you know that in 15 hours time in the character’s lives... none of that will matter.

So yeah, pretty well cobbled together for the most part and there was even a parody of the old War Of The Worlds scene with the tentacles groping around and looking for the bothersome humans which, I actually found to be far more worrying than I expected it to be... even though I knew there would have to be a scene like this in the movie at some point.

After a while though, it has to be acknowledged that I stopped liking the way the story progressed, or rather didn’t progress, during the second half of the movie. The characters are mostly making stupid decisions throughout, which didn’t help, but the lack of a budget for a larger scale story really begins to wear on the viewer after a while, I think. Everything that is seen involves one or other of the initial set of characters and we never really leave them. What this means is that when the US military is sent in to try and stop this new and fantastic alien menace, we don’t get any military point of view on what is going on as the story never goes outside the realm of what the main protagonists see. So we see battles happening from a distance without ever really getting close enough to the main action to know what the tactics being employed are. Even when we have a scene with a couple of soldiers on a roof, we’re never really told anything about what is going on.

So, yeah, the movie has a strong first half with an equally competent but increasingly dull second act, to be honest. It just gets a bit ‘samey’ after a while and I guess the budget wasn’t there to get the story onto another level when it needs to pick up at certain points although, as I said earlier, the effects sequences are astonishing. As are the aliens themselves, who seem to be half machine and half organic creatures that really probably shouldn’t have been as convincing as the special effects team are able to render them here. I’m not even 100% sure that the big motherships that come and start all the trouble are not living creatures themselves, to be honest. It’s not made clear and left for the viewer to figure out... which is okay in my book.

Okay... so now I talk about the ending so... spoiler warning... do not read the next two paragraphs if you don’t want to know.

The film does seem to be going on a bit and outstaying its welcome towards the end. It’s a bleak proposition for any survivors because, as I said, the aliens seem to be fairly invincible. The creatures have been luring humans towards them, like the sirens of mythology, with hypnagogic light shows which pacify them before they ‘eat them’ metaphorically and take them inside... where their brains are scooped out and used to install into more new aliens. Which kind of makes no sense as a way of propagating your species I reckon...

Lots of pitfalls but, then again, I don’t think like an alien, I guess. However, when the last two surviving protagonists, Jared and Elaine, are snatched, Jared’s brain is scooped out and he’s put into a new alien. Elaine is discovered to be pregnant and so she is taken ‘somewhere else’ to have some kind of other thing done to her...but here’s the thing. Jared’s brain is still thinking like he was before, so the new alien comes to the rescue of Elaine and is about to take on all the other aliens (probably unsuccessfully) as the movie ends. It’s a bizarrely interesting movie in terms of pushing the follow through of just where you can take your main male protagonist but, alas, it also doesn’t make much sense. Why would Jared’s former mentality kick in? When no other human’s does? And if that were at all possible... why would the aliens be doing this in the first place.

There’s not much logic here, it’s true but, at the end of the day, hats off to the film makers for trying something different in terms of where the story can go... even if I had lost faith in the characters by this point. The interesting but ultimately unsatisfying ending, coupled with a fairly solid first half to the movie, are enough to at least ensure I can recommend this movie to the kinds of people who like science fiction movies and alien invasion scenarios in particular. There’s a lot wrong with this movie and also a lot right. There was a sequel made which was supposed to come out last year (if the teaser posters are anything to go by) called Beyond Skyline and starring Frank Grillo but, as far as I can tell, although it’s completed, it hasn’t actually been screened as yet. I quite like Grillo, though, so I’m hoping this won’t be consigned to being on a shelf without ever seeing the light of day. That would be a shame (or possibly not, if it’s that bad).

Either way, Skyline is at least an interesting film and, though it might not have the same rewards and pleasures that other films in this kind of genre have, it’s certainly not a terrible movie and I think sci-fi fans would be wrong to ignore it. I’m not saying they’d necessarily like it but, you know, it does have some minor things to say at the end. Not one I’d watch again (the Blu Ray cost £3, brand new) but certainly good enough for one shot.
Posted by NUTS4R2 at 19:00