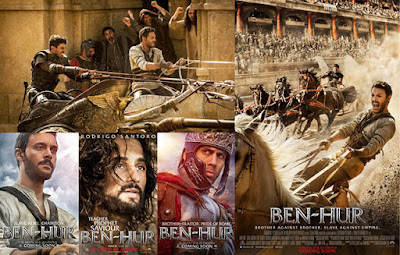 Okay... so this is probably another remake that nobody really wanted but at least it’s directed by a fairly cool Russian-Kazakh director, Timur Bekmambetov, who made the Nightwatch and Daywatch movies... both of which were great although, in all honesty, not so great as adaptations of the astonishing source material they took as they’re inspiration. Ben Hur is another adaptation but... not of the novel.

I can’t really have too much of a problem with a remake of Ben Hur because the one I personally think of as a classic, the 1959 Charlton Heston version (which I reviewed right here), subtitled A Tale Of The Christ,  was at least the second, if not the third version of the story already. And, as far as I know, none of these adaptations are too much like the popular novel written by Lew Wallace. I read it a couple of decades ago and don’t remember too much about it but I do recall it having a lot to do with Ben Hur raising an army to fight for Christ against the Romans... and the movies haven’t picked up on that plot line yet, it seems to me. So this new one is very much a remake of the previous movie versions, I think, and since they stray from the source material so much already... I don’t think purist notions of not having yet another remake are helpful.

That being said, this is obviously not as good a movie as the 1959 version, for sure but, surprisingly, it is an entertaining movie and it does come at the same material from a slightly different angle to those that came before it.

For example, the prologue with the birth of Jesus is ommitted from this version and it starts off, instead, with the opening of the chariot race before flashing back in a clichéd but interesting visual transition to Judah Ben Hur and his adopted brother Messala racing horses at a point in time a good six or more years prior to where the post-credits story in the 1959 version begins. The two characters, played very well by Jack Huston as Ben and Toby (Dr. Doom) Kebbell as Messala, are more fleshed out and you realise just what it is both of them have to lose from their falling out after Messala comes back from joining up with the Romans. It also sets itself up for an end sequence which pushes the bounds of credibility almost as much as Messala’s decision to destroy Judah and his family in the first place... all of which seems so much more ridiculous when you realise the history of the characters as explored here. Oh, yeah... it’s got a much different ending to the 1959 version, that’s for sure, but I don’t want to put any spoilers up with this one.

Almost as though Timur Bekmambetov recognises this slight weakness in prior versions, instead of the cause of the downfall of the House of Hur being a loose tile that falls on a Roman parade... it is, instead, slightly less flimsy excuse for Messala’s banishing of the brother of his youth here... although, to be honest, it still seems like a massive over reaction to the problem at hand. However, that’s one of the ways that the director has made this film more accommodating to the tastes of modern audiences. That and the pacing.

This movie is around an hour and a half shorter than the 1959 Ben Hur and it sails along with massive chunks of the traditional story excised in the name of a brisker, modern take on the tale. For instance, Jack Hawkins 1959 character of Quintus Arias, replaced here by the always remarkable James Cosmo, is almost totally excised in the film and his relationship to Ben Hur completely non-existent in this version. I won’t tell you why because that would constitute a spoiler but, honestly, this helps cut a lot of time out by removing the whole plot line about Hur becoming a free man of Rome and thus able to compete in the circus against Messala. And although we have the excellent Morgan Freeman narrating and playing Ilderim (the role played so well by Hugh Griffith in the ‘59 version), his words which allow for the logic of the film to pitch the exiled galley slave against the might of Rome momentarily palatable, are merely a work around it seemed to me, to allow for this film's expedienct nature. Also, why oh why have they changed Ben Hur’s galley slave number from 41 to 61 in this version? Was that the number in the book? I don’t remember but I know it popped me straight out of the movie experience in this one with an angry reaction as soon as somebody spoke the number. Grrrrrrr. Also, the lack of continuity where fake snow landed in people’s hair, didn’t melt but also didn’t match from shot to shot and moved around on their heads depending on which takes were being used and in which order they were edited together really dislodged me from the immersive nature of the cinema experience too... there was a lot of bad continuity stuff like this going on throughout the film.

The pacing and lack of story, plus a very truncated post chariot race sequence, do, I have to admit, make this version seem like ‘Ben Hur light’. It’s very much a ‘highlights album’ compared to the versions that have come before it, it felt to me.

The other thing this does a lot is take the more modern Hollywood route, which isn’t one of contemporary USA film-makers' most endearing features, by following a cause and effect narrative arc. Everything seems to build towards something else with almost nothing in there being just ‘a nice scene’ as opposed to something which gets you to your narrative destination quicker. For example, the fate of Ben Hur’s leprous mother and sister is the same as it is in the film but he meets with them before the chariot race in this one, thus giving him and the audience more emotional fuel to ensure we all want to see him take his revenge against Messala in the race. Also, of course, by relocating most of these scenes earlier, we have less to get through post-race with the big action climax of the movie coming not too far before the end of this one. It’s all very clever and entertaining but... not necessarily an equal balance for the offset of the impact of the ending, which seems almost ridiculous in terms of Hur’s family and with a new outcome which, by the final moments of the film, seems absolutely, hysterically wrong. All I’m saying is that Messala, although wonderfully played by Kebbell, can’t really keep credibility with the audience, I think, with the script as it is here.

But, there’s also a lot of good stuff here too. The performances are all great, the photography and shot designs are all very interesting and dynamic and you certainly won’t find yourself getting bored. The chariot race is also very gripping and, although the concluding minute or so of this event are perhaps a little less impactful in some ways, it’s all quite breathtaking stuff and almost, believe it or not, holds its own with the 1959 version of the scene. Not quite but... almost. There’s also one thing it has which that specific earlier version didn’t have in this scene...

Which brings me to the music.

The score here is courtesy of the wonderful Marco Beltrami and I will say straight away that it really wouldn’t be fair to compare this to the music of the Charlton Heston movie. That version had a score by one of the greatest film composers in history, Dr. Miklos Rozsa, and it’s acknowledged as being one of the all time great movie scores. I could no more fairly compare this to that than I could compare Danny Elfman’s score for Planet of the Apes to Jerry Goldsmith’s groundbreaking original or, indeed, Beltrami’s own score for The Omen remake to Jerry’s original of that. The modern one will always be destined to lose in a straight comparison and, anyway, it would be a completely unfair thing to do because the cinematic syntax of the modern movie versions are in no way anywhere near the original's in terms of their approach to shooting a story. So, what I will say is... that Beltrami’s score for Ben Hur is pretty darned good. It’s a different approach but it kicks ass when it needs to and I look forward to grabbing the CD at some point soon. That being said, he does make a decision about the chariot race sequence that I really wasn’t expecting.

In the 1959 movie, which was almost pretty much wall to wall music, the chariot scene is left completely unscored. It has a prelude fanfare but, when the race starts, you are down to just the sound effects and it helps make the race seem more grittier and forces you to concentrate more, in some ways. Now, when George Lucas re-made the chariot race in his pod race sequence for Star Wars Episode One - The Phantom Menace... another move which is pretty much wall to wall music... John Williams also, apart from a similar prelude fanfare, leaves the majority of the pod race left unscored. This is partially, I suspect, as an homage to Rozsa’s choice on Ben Hur and Williams' music only comes in right at the end of the pod race when the valve on Anakin’s racer starts to work loose. I suspect one of the motivations behind both of these composer’s decisions may have been because of the wall of noise that the music would be competing against although, I know they were both highly skilled enough to be able to write around that obstacle.

However, in this version of Ben Hur, Beltrami has scored the chariot race and... you know what? It works really well and is quite spectacular in the way he uses the baseline to accentuate the mounting tension of the race. It’s a different solution to the previous versions but it’s, you know, a different film and it works surprisingly well here. Sometimes, you don’t always have to make the same decisions that history has taught us works, I guess.

And that’s pretty much it for me on this movie, I think. It’s not a great version of Ben Hur but it is an entertaining movie, for sure. It’s not one I could watch repeatedly through various decades of my life like the 1959 version but it’s a good piece of cinema and, if you are not overly wedded to the versions that have come before it, then I don’t think you will be too disappointed with this one as a ‘good night out at the movies’. There may be a little too much of the Religious element in this one but it’s not as blatant as the original (until maybe the end) and I think most people can be tolerant of other people’s theological issues, even if they don’t tie up with their own. So, yeah, all in all a recommendation from me and not the travesty I was expecting. The ‘highlights only’ approach isn’t ideal but there’s enough distraction on the screen to hold your interest for the two hours, I think.

Ben Hur - A Tale Of The Christ