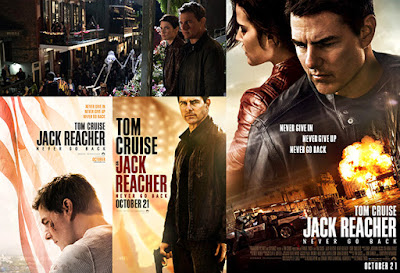 The Reacher
Walks Among Us

Jack Reacher - Never Go Back marks the second time that Tom Cruise has played Lee Child’s modern, literary hero after starring in the excellent Jack Reacher (reviewed by me here). At the time I saw that I was not the biggest Tom Cruise fan but I also didn’t turn off just because of the man’s unfortunate religious choices and, in the four years since I saw that one I’ve warmed to him much more as an actor who makes smart choices, does the job well and is, generally speaking, a decent human being (scientology aside and, frankly, I don’t want to taint this review by giving a showcase to that stuff).

This is apparently based on the 18th book in the Reacher series (the first movie was based on the ninth) and this one is a worthy successor to the original movie. I didn’t quite like it as much and it has an ever-so-slightly different feel to it but I suspect this is because the book is possibly more friendly to the Hollywood action genre rather than any specific changes in adaptation... although I’m sure that the company have made their fair share of those too. I’ve never read any of the novels myself but Lee Child continues to show support to the movie series by, once again, taking a small cameo role in the film.

This movie is all about a possible romantic interest for Reacher, who is in Washington to take a military lady out for dinner after a number of phone calls over the years. Her name is Turner and she’s played by one of Marvel’s finest Agents of SHIELD, Cobie Smulders, as seen in a fair few of their movies. However, when Reacher finally looks her up she is under military confinement for charges brought against her and, since Reacher figures she hasn’t done anything to warrant it, he also finds himself framed and under arrest for suspicion of murdering her lawyer pretty quickly. So he breaks her out of the military base and the two go on the lam, hunted by the US government and a team of ruthless assassins who want them dead while they try to piece together what brought all this into play.

A further complication on the way is the fact that Reacher may, or may not, have a teenage daughter he never knew about and now she has to go on the run with Reacher and Turner because, by a dramatic twist of fate, the assassins know about her and so they’re coming for her too.

And so here you have a recipe for an action movie which can involve male/female bonding, potential father/daughter bonding, potential girlfriend/potential daughter bonding and, surprisingly but refreshingly for a big budget Hollywood movie, female antagonism of the title character due to his sexist attitude... and yeah, this movie runs with it all and manages to hit all those emotional beats with room to spare. Which is no mean feat considering the pacing of the film which, frankly. doesn’t hang around in the same ways which were a key strength of the first movie... instead, devolving this into more of a slightly inferior Hollywood action blockbuster but, frankly, no less a fun one.

What I mean by that is that the first Jack Reacher was slower and had more of a suspenseful, genuine thriller air to it. You could imagine someone like DePalma or even, without too much of a stretch, Hitchcock directing certain scenes in the first one. That opening sniper scene in Jack Reacher, for instance, was a powerful set up. This movie is more like what you would expect from modern Hollywood action cinema... it’s a run, chase, punch, shoot and repeat movie for most of its running time but, as I said, it’s a damned good one so I’ve not really got much of a problem with this.

I don’t know much about director Edward Zwick but I did notice... and I’m not sure if this is a conscious thing or not... that he’s introducing certain characters and situations with a very quick establishing shot before refocusing on the main character in a shot with a slow pan or some such technique to give you a kind of ‘closer look in’ at who or what he wants you to notice. It sounds kinda lame that he should follow a regular establishing shot of, say, a character to do this... after all, think of what Spielberg does in the Indiana Jones films. However, quirky as it seems, it kinda works here and the lead in to the more focused shot is usually so brief that I don’t think half of the audience even realises he’s doing it.

This kind of foreshadowing of a shot is similar in theme to what he does with Tom Cruise’s character whenever Reacher is trying to see an event in the past the way it ‘may’ have happened and, although it’s a slightly different technique in terms of the motivation for the foreshadowing, I wouldn’t be surprised if the two aesthetics were linked, deliberately or subconsciously, by a similar approach to making the film.

What I can say for sure is that it’s a darned entertaining movie and the acting by Cruise and Smulders is great (although I noticed Cobie seems to not win most of the fights she gets into, for some reason) and the chemistry between them and the wonderful teenage actress Danika Yarosh is something which really helps pull the film together by making the three characters work together as a unit... although I’m sure you’ll realise why the teenager is in it in terms of a dramatic undertone to the action at the end of the movie and, alas, on that score this movie does exactly what you think it’s going to.

I was really quite partial to Joe Kraemer’s score for the first movie and was hoping they would bring him back for this one. Alas, that was not to be but I have to say that Henry Jackman’s score is an equally appropriate work to support this... especially since this second movie is much more action oriented. I think I’d need to listen to it away from the movie to make a proper judgement on it but, in terms of the way it supports the images, there’s certainly nothing wrong with it.

Jack Reacher - Never Go back is a solid Hollywood action hit and, if that’s what you want from your cinema then certainly I would recommend this one. The action sequences are unsurprising but well executed and the whole mix of good actors, good direction and a nice bit of action scoring is not a bad thing to have playing at your local cinema, for sure. I don’t know how fans of the books feel now about Cruise’s casting in this but, certainly, people who liked the first movie should be okay with this one, even if the run, punch, jump ethic does seem to take over just a little too much during the course of the running time. Also, if you’ve not seen the first one, there’s not really anything that isn’t explained in this one so... this can also be a jumping on point for the franchise if you are feeling left out from not having seen the original film. Something for everyone here.
Posted by NUTS4R2 at 19:03