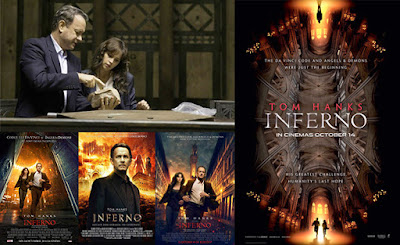 Not to be confused with the amazing Dario Argento movie of the same name, Inferno is the third of the big screen adaptations of Dan Brown’s popular Professor Robert Langdon series, this one being based on the fourth book... which is kinda strange but then the series started off with the second book, The Da Vinci Code and then made a sequel out of the first book, Angels And Demons (the movie of which I reviewed here). So why they’ve missed out The Lost Symbol I don’t know but I’m sure, if this series of movies continues to make as much money as the novels have done, they’ll get to it.

Like the first two movies, this one is once again directed by Ron Howard (who played Richie Cunningham in the TV show Happy Days back in the 1970s) and all I can say is, I still can’t figure out what his directorial signature is. Other than, for the most part, making some pretty entertaining and, usually, quite popular movies. My experience with the series thus far is... The Da Vinci Code was an okayish movie (and it had Audrey Tautou in it, so that helped) and Angels And Demons was an outstanding modern action thriller. This third one is incredibly entertaining too but, I think it also has some problems... just not quite enough to outweigh its sense of fun.

The movie, once again, stars the always watchable Tom Hanks as Professor Langdon (an actor I first saw in a TV movie called Mazes and Monsters and liked him in that so, you know, it’s good that he’s made a but of a name for himself now) and he is aided and abetted (character wise) by a very strong cast including Felicity Jones, who played Mrs. Stephen Hawking in The Theory of Everything (read my review here) and who is about to become very famous heading up the release, in September, of Star Wars: Rogue One. The film also stars Sidse Babett Knudsen (who I last saw in The Duke Of Burgundy (reviewed here), Ben Foster, Irrfan Khan, Omar Sy, Ana Ularu and... oh yeah, they’re all amazing. You will believe in these characters and the unusual things they say and do for sure... you will have no problem suspending your disbelief here, that’s for sure. So that’s one of the huge plusses that the movie has.

The film starts off in the midst of an ongoing story and we're catapulted right into the heart of things as we have a completely discombobulated Professor Langdon suffering from hellish hallucinations based on a famous illustration of Dante’s Inferno from The Divine Comedy. The pace is, beyond anything the second movie threw at the audience, quite blistering. However, for the movie as a whole that’s a bit of a double edged sword because, although you won’t get bored here and the action will whizz by at a rate which will leave you wanting to catch your breath maybe just a little more than the director and editors allow that to happen here... you will also be as discombobulated as Professor Langdon from the outset of the film. Although things make more sense as the film speeds on, you will find yourself just wishing it will all calm down at some point.

That is to say... it’s a movie made up of mostly short sharp shots. The modus operandi here seems to be why listen to a line of expositional dialogue in a master shot when you can split it up into three totally different angles of a character when they are delivering a line. I guess it makes the dialogue more interesting but it's usually also punctuated, very quickly, by another dose of action/suspense as Hanks and Jones are hunted by pretty much every authority on the planet... as Professor Langdon tries to stop a virus which promises to unleash death on over half the world very quickly (people who are familiar with the story as it’s represented in the book, which I’ve not read myself, should be aware that this movie has a quite different ending to the original novel). As a consequence, however, it’s all very choppy and there are some points, even in scenes where nothing much is happening, where you just wish everything would slow down and go back to a single master shot at some point.

I’m guessing one of the other reasons the people who made this have decided to subject this movie to a ferociously intimidating piece of editing (although it's never dull) is because there is a so called twist about two thirds into the movie and they're maybe trying to distract you from it but, honestly, if you haven’t worked out what that twist will be within five minutes of the film's opening sequence starting you’ve not been paying attention because, honestly, Howard pretty much telegraphs this not so revealing reveal quite a lot throughout the movie. I was kinda disappointed, actually, when it happened because... well, who wasn’t expecting that? Obviously, I won’t give that twist away here but it’s exactly what most people, I suspect, are thinking throughout the movie and saying to themselves... “C’mon Professor Langdon, when’s the penny going to drop?”.

However, like I said above, although there are a lot of problems with the story... or at least with the way the story is presented in this medium here, there are enough plus points to kinda outweigh it and still give you a good time at the movies.  And one of those plus points, of course, is Hans Zimmer’s amazing score.

I kinda liked Zimmer’s score to the first movie in the series but wasn’t completely crazy about it. His second score, though, to Angels And Demons, was simply a fantastic modern work and certain tracks from that are never off my iPod or CD player for very long. This third score is better than the first and certainly holds it’s own with the second... although I need to hear it as a stand alone performance before I can decide whether I like it better than the second or not. The music obviously uses Zimmer’s already established Robert Langdon theme but, also, it seems to use a lot of references to the action themes from Angels And Demons in some of its slower passages too... especially through the first third of the movie, which surprised me because that means I’ve now got absolutely no idea how the leitmotif works with this set of films. Why the heck was that in here? I haven’t got a clue but I do know a good soundtrack when I hear it and this one is pretty cool. As to be expected from the pacing on the movie, there’s a lot of action music and percussion so it should be quite a ‘rocking’ listen when I finally get the CD to this one. I’ve come to respect Zimmer a lot over the last decade or so, after initially dismissing him at the early stages of his career. He also knows how to rock a concert venue as you can read in my review of his London concert from earlier in the year here.

All in all, although Inferno is quite predictable, a bit choppy and aggressively edited (not to mention quite noisy for a lot of the time), it’s also got some beautiful visuals (when you get time to focus on them), some great acting, an amazing score and, frankly, there are a lot worse big budget type popcorn movies you could be spending your cinema cash on at the moment. I’m not hearing a great critical reaction to it at the moment but I’m hoping that it will do enough at the box office so that Ron Howard and Tom Hanks will reunite for a fourth one (and preferably with Hans Zimmer in tow). Hopefully they’ll sink their teeth into The Lost Symbol next.
Posted by NUTS4R2 at 18:48