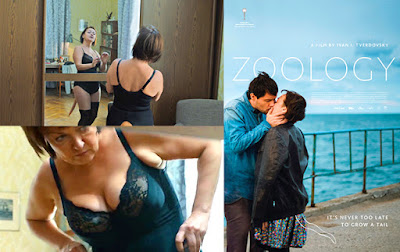 And so my 2016 London Film Festival adventures begin with Tverdovskiy’s low key but gently stunning movie Zoology. The film’s central concept intrigued me enough to add this to my ticket applications for this year’s festival... or bookings I guess, since they’ve all gone on-line and become computerised these days, which I hate.

The story, such as it is, tells of a frumpy, late/middle aged woman called Natasha, played by an amazing actress who doesn’t seem to have done much film work at all in her time, Natalya Pavlenkova. Not long after the film has started, we find that Natasha, who works in her local Zoo, has somehow grown a full fledged tail. Naturally, she is somewhat concerned about this and so goes to see her doctor, who then sends her to get an x-ray done. The man who takes her x-ray... and a second visit after the first one turns out to be blurry... is Pyetr, played by Dmitriy Groshev, who becomes Natasha’s romantic interest, despite what looks to be a fair age difference between the two of them and, of course, despite Natasha’s tail.

The film is a gentle study of Natasha as she begins, over the course of the movie, to embrace the idea of having her tail and we see her transformed into someone who starts to enjoy her life as her new appendage seems to see her blossom into the person she always had the potential to be. It’s a lovely little study of her coming to terms with her tail as the rumours and whispers about ‘the devil woman with the tail who can fix you with her eye and make you die with her stare’ become more abundant in her small community.

Perhaps part of the reason it’s so engaging, besides the absolutely incredible performances put in by the two central leads, is that the director seems to be using hand held camera for everything. There are a lot of shots which follow the actors around almost reactively, like a visual version of a film score 'Mickey Mousing'* the on screen actions... but even with the seemingly static shots in the movie, there’s still a lot of slight camera movement infecting the 'still' shots like a ‘slow shake’ and it’s very much the kind of methodology which some American TV shows, like Firefly or the Battlestar Galactica reboot, have been using recently to give a more ‘documentary-like’ feel to the proceedings. It’s kind of interesting, actually, because I noticed this happening pretty much all the time throughout the movie as I was watching it without being aware of who the director was and what his previous movie making exercises had been. However, at the screening, we were lucky to have lead actor Dmitriy Groshev on hand, with a translator, to talk a little about it and to answer any questions from the audience afterwards... some of which were quite awkward and, therefore, quite interesting. He explained that the director was actually a documentary director so that immediately made sense to me because he is obviously using that approach to make what seems to be (and the IMDB isn’t much help on this, it seems) only his second fictional feature length film.

It’s not a particularly unusual approach to making a movie, especially nowadays, but it does serve to give the film a kind of voyeuristic, fly-on-the-wall, kind of feel to the proceedings and, consequently, helps to legitimise what might be considered a fantastical story element by grounding it in a style which you might not associate with that kind of subject matter. Right away, you are sympathising with the main character because you forget that you are watching actors and are, instead, watching a slice of life, to a certain extent.

The film treats it's central theme less than seriously, most of the time, especially for a study dealing with the alienation of a person through a sudden physical transformation. It also doesn’t judge, like the local community and church, who condemn the phenomenon as the sign of some Religious demon, the existence of the appendage in question and, in fact, leaves the origin of the mystery of this new member unexplained... which is refreshing and, although this has been happening a little more lately in the odd American movie, is something which helps dispose of a lot of exposition and allow the writers and director more time to concentrate on just what it is they want to say about the phenomenon.

The comedic element of the movie, which includes a really fun scene where the lead actress is using her very flexible tail to masturbate in her bathtub, is very broad and the myth of Russian films being humourless and very bleak is pretty much busted throughout, most, of the running time here. I’m no stranger to Russian movies but at least two people had warned me, before I went to see this, that is was Russian and, therefore, bound to be a bit miserable. Imagine my surprise, then, when in the last few minutes of the movie, this actually turns out to be correct and we have a tragically dark but, also, beautifully executed ending which actually took me by surprise during the last minute or so of the film. I really don’t want to give away any spoilers here, especially since it was revealed at this screening that the movie will, in fact, be getting a UK release at some point in the future, but the ending of the movie both startled me in the unexpectedness of just where it leaves us while at the same time being absolutely brilliantly timed. The best thing I could liken it to would be certain types of music. When I was in my 20s and 30s I used to listen to a lot of music by contemporary minimalist composers and two of them, Michael Nyman and Philip Glass, would often end a piece quite abruptly but, simultaneously, at the exact natural point it should be ended. The result was a passage of music which finished before you realised it would (on first listen) but at the same time brought a sense of unconventional resolution to what you had just been listening to. The ending of this film is just like that... but on visual terms with the editing, which is always said to be an element of film which is similar to music anyway and, if you want to see that analogy demonstrated perfectly, then the ending of Zoology gives you that chance.

After the screening there were a fair few questions, one about the portrayal of female stereotypes, which I guess was kind of valid but which the actor admitted, presumably because he, like me, can’t see anything wrong with using stereotypes as short hand to get a message across... especially when these people do exist in real life. Another was very telling in that the lady who asked a question obviously saw the tail in the tale as a penis and some kind of misogynistic attitude towards women in the message of the film and, although there is that analogy made a couple of times to set up a couple of jokes, I think the question said more about the person asking it and the baggage she brought to the screening, rather than any inherent negative attitude to women... especially for a film which has such a strong, female character as the central role (and not some kind of male fantasy female, either). The lead actor pointed out that perhaps the lady was confusing somebody moving closer to maleness (which isn’t the case, anyway, I think) with somebody becoming just generally more alien and therefore not accepted but I can kind of see where the lady in the audience was coming from, even if I don’t agree with that subtext being present in the film, myself.

And there you have it. Zoology is a great little movie which has an intriguing premise and which plays it, mostly, for comedy with a lightness of touch which, perhaps, allows the bleak reality of the situation to come crashing down on the audience at the close of the film. One of the better films I’ve seen at the cinema this year and one I’d definitely recommend catching in screenings or on some kind of home video format if you get the chance. A movie which deserves a lot of recognition, I think.

*A term for film composition where the music catches and illustrates particular actions or dialogue highlights etc.