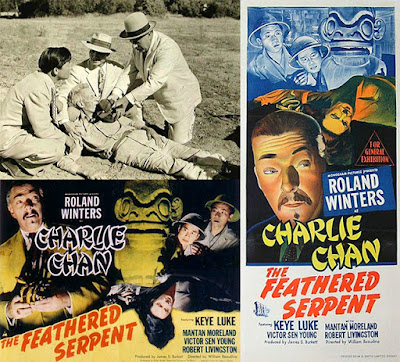 So here we have The Feathered Serpent, the penultimate of the six films where Roland Winters played Charlie Chan and, although it’s not an especially entertaining edition of the exploits of the world’s most famous Chinese American detective, it is one which is quite unique in the history of the series. It’s the only one of the original run of films which spanned nearly two decades and various companies to feature two of Charlie Chan’s sons in the same film, together. Namely Number Two son, played by Victor Sen Yung and, after a very long absence, Keye Luke as Number One Son.

Now Keye Luke was an artist who used to paint posters for various movies until he shot to fame in the original US run of Charlie Chan films opposite Warner Oland, my favourite Chan man, in the title role. I always remember him from watching the Charlie Chan films as a kid where he used to run in on a scene, usually thinking he’d solved the mystery and yelling something along the lines of “Gee, pop!” When Oland died unexpectedly, Luke had already shot some scenes for the next movie and these were transplanted, with new scenes added, when the Charlie Chan film was hastily rewritten and turned into one of the Mr. Moto films with Peter Lorre. The 1938 film Mr. Moto’s Gamble, to be precise, which I reviewed here. After the films were recast with Sydney Toler, Luke declined to continue in the series and so number two and three sons replaced him, on and off, for the majority of the Toler films. But, one decade later, Keye Luke was back in the series, opposite Roland Winters... regardless of the fact that he was slightly older than the man playing his father at this time (many years later, Luke would go on to voice Chan himself in the Charlie Chan cartoon show).

Now, with Mantan Moreland continuing in his role as the Chan family chauffer Birmingham Brown, you might think, with the three of them, that there are now way too many sidekicks for a Chan film to comfortably handle and, to tell the truth, you’d be right. How many 'on screen dummies' do you need to explain things to under the banner of audience exposition? I might be a little harsh on the idea, actually, because the writing on this one isn’t that great, even though it’s a remake of a former 1937 Western, The Riders of the Whistling Skull.

Roland Winters seems a little too laid back in this one, it seems to me and... I have to wonder what he thought of Keye Luke returning to the role. It’s a bit of a puzzler because I’m presuming they really went to town ageing Winters on this one in some subtle way because, as I indicated above, Keye Luke who is seen playing his offspring is, actually, five months his senior. Something only Hollywood could be bold and stupid enough to get away with.

This one isn’t so much a mystery story, since the villain behind the plot of this tale of a doomed archeological expedition reveals himself fairly early on in the proceedings. The set up is such that, with Chan and his team on vacation in Mexico, they find themselves suddenly embroiled in a plot when the man they rescue from the roadside turns out to be one of two missing scientists that another expedition are trying so hard to find. That means it’s up to Chan to help them find the scientist in question and also find the hidden Aztec lair full of buried treasure. So, yeah, the usual stuff but the execution of it here leaves a lot to be desired, I think.

There’s lots to groan about in this one, too. When the lights go out in a house at night and the first murder is committed under cover of darkness, it only takes the lighting of one single candle to suddenly plunge the set back into a fully lit shot set up. Oh dear.... still, Monogram were not known for being particularly brilliant film studios, that’s for sure. These Monogram films had a much smaller budget than the 20th Century Fox produced movies and, although some of the Monogram Chan films are excellent, the lack of production value really shows on this one.

Another groaner is when Chan and his sons, with Birmingham Brown tagging along, decide to join the expedition, Number One and Two sons immediately dress up in safari suits, along with obligatory pith helmets... this looks really silly. Actually, one of the great problems with this is the apparent lack of chemistry between Keye Luke and Victor Sen Yung. This would be Yung’s final Charlie Chan film... although he’d started back when Sydney Toler first took over from Warner Oland, with Benson Fong also playing number three son in the films where Yung wasn’t available. Now, I’m not sure if this lack of dynamic interaction between the two is a personality thing or whether it’s because they have just been given some terrible lines to work with here. What I do know for sure is that, once again, Mantan Moreland’s portrayal as comic relief Birmingham Brown is fantastic and he somehow manages to get the best lines, again, in this one. For example, when he wants to get out of a scary situation he says to one of them... “There’s somebody I’d like to see outside.” When he’s asked who, he answers “Me!”. Similarly, in another moment when he’s at a disagreement about staying where the trouble is, he reminds his boss... “Oh Mr. Chan, we’re on vacation. Why don’t we vacate?”

So yeah, Moreland and his quick fire dialogue really helps hold the movie together, for me, but ultimately, this one does fall kinda flat. There’s a nice mixture of moving camera and also static edits in and out of compositions but, at the end of the day, there’s just not enough going on here and it’s just not well written. Even the comedy moment which you can see coming a mile off, with Moreland sitting on a rock and accidentally activating the entrance to the hidden temple, is not milked the way it might once have been and it’s just a genuinely dull affair, for most of the short running time. The Feathered Serpent is not a Chan film I’d recommend anybody start on but, if you are a die hard fan of the series, the fact that he has two sons sharing the screen with him is certainly interesting. If you want to get excited about Charlie Chan, however, go back to the Warner Oland movies first, would be my advice.
Posted by NUTS4R2 at 19:06