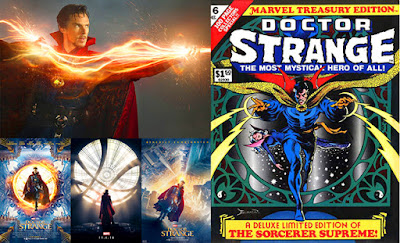 Doctor Strange is one of those comic book characters who I loved as a kid and I got quite excited when I’d heard Johnny Depp was in consideration for the role. I wasn’t too disappointed when he exited the scene because, frankly, Benedict Cumberbatch is one of those actors who you know will do a great job with any material he’s given and I could see how the arrogance his Sherlock character projected would be something which could really help bring the pre-magical version of Dr. Stephen V. Strange to life (the V stands for Vincent and that was who the original look of the character in those early 1960s appearances in Strange Tales, which I loved so much in reprint form, was based on... Vincent Price).

Now, I used to love these comics because Doctor Strange could jump out of his physical body and do battle on the astral planes, while somebody was hanging around and guarding his physical form so it was kept safe from harm. As a young 7 or 8 year old, of course, I was all about things like astral projection and ‘out of the body’ experiences so, when you had a Marvel superhero who could do all that stuff, it was a treat.

I went to the cinema on the first night of release in the UK, which was unusual enough in that it was a Tuesday, because I just couldn’t wait to see how this character fits into and pushes the boundaries of the Marvel Cinematic Universe and the answer, on both those counts, was... well, actually pretty well. Scott Derrickson, who directed this wonderful movie, has actually treated the material with the respect it deserves and you get a real feeling of those early short strips co-created by Stan Lee and, as importantly (perhaps more so), original Spider-Man artist Steve Ditko, who helped write and then drew the strips. They were pretty much a guide to the psychedelic world of the spirit in its hippiest, trippiest form but, a good few years before all that wave of counter culture hit (I’d personally say that certain sequences in Roger Corman’s Edgar Allan Poe cycle of movies also foresaw and possibly ‘usher’ed in the birth of psychedelia... possibly as influenced by the colour work that Mario Bava brought to the cinema and which the people at AIP studios at the time were more than aware of).

The movie really does those early 1963 and 1964 tales justice and the origin is pretty much the same as the one depicted in the comics, although I believe The Ancient One was originally based in the Himalayas and, either way, he was most certainly an old man...not Tilda Swinton, who plays the role in the film. And that’s not a dig by the way... the casting of the always brilliant Tilda is a really shrewd one, especially since the wonderful Rachel McAdams plays the only other female character in this movie and she’s pretty much wasted in how little screen time she has for the majority of the story. We also have the amazing Chiwetel Ejiofor, a villainous Mads Mikkelsen and a very funny Benedict Wong in the cast. Along with Cumberbatch, absolutely nailing Strange as you would expect from him, they have a really great ensemble group of actors here... at least two or three of whom will definitely need to come back for further Marvel movies.

I do have a few disappointments in the film but they are really minor. I’ll just get them out of the way now.

Okay... so somewhere in The Avengers (aka Marvel’s Avengers Assemble and reviewed here), I’m pretty sure Doctor Strange is mentioned in the helicarrier (also in Captain America: The Winter Soldier, reviewed here... but that’s a different issue). Now the Stark Tower wasn’t rebuilt as The Avengers Tower until after the events that took place in that movie so... how can a ‘pre-heroed up’ version of the character be looking out on a New York skyline that includes The Avenger’s Tower? Surely the timeline here doesn’t make sense and is a bit of a... well, a huge continuity error? I may be wrong but that kind of hit me between the eyes when I was looking at this movie in cinemas.

The other thing is that the tone of the story seems a bit... hmmm... somehow a bit too ‘even’. The magical battles are really something special in that they’ve done it all superbly... well okay, the astral plane versions of the characters aren't totally white ghosts like they were in the comics but what they’ve done here gets the message across pretty well and probably appears a lot more acceptable on screen than taking the look straight from the page, is my guess. However, there doesn’t seem to be much contrast within the scenes... with the last third of the movie being a few battles at different locations following on in quick succession without any real contrast in the sequences. I felt it needed just a little more ‘oomph and rest’ between set pieces to give you time to breathe and pace things a little more... thus enhancing the action sequences when they come...  but that didn’t quite get that feel here so it almost threatens to become somewhat less than the sum of its parts on occasion.

A third thing is problematic purely because I knew the early comics. There’s a character in here and, as soon as I heard his name, I knew where the story arc was going to be taking him... I won’t reveal the character name here because if you know the comics you’ll know it already... and I don’t want to put in any spoilers here. I didn’t know if they were going to be saving a certain ‘turning point’ for that character for a later movie or maybe they were going to go the full Green Lantern movie route and have that character do his thing in an epilogue scene. Well, this movie has two post-movie scenes, as do a lot of MCU movies these days. One superb one in the middle of the credits with exactly the Marvel character I had suspected would turn up making an appearance and gluing it together with one of next year’s MCU movies... and a post credits scene where the character I mentioned before gets to live up to the character as portrayed in the comics. So, yeah, they went the full Green Lantern on this one... which is fine by me because I’m one of the few people who actually loved the Green Lantern movie and I believe the plot and structure of the new Doctor Strange movie shares a lot of DNA with it, actually. Anyway, my problem was that I knew something pretty basic about a certain character who is in the movie way before it happened and so... maybe that wasn’t the wisest move. Then again, there are probably a significantly less number of people who used to read Doctor Strange than most of the other Marvel comics so... it’s not such a big deal, I guess.

Everything else about the movie works really well. The acting, the look and design, the spectacular special effects are all absolutely brilliant... and the dialogue in this one is really great too. There’s definitely a lot of fun and humour about this movie and it’s certainly a sharp relief from the previous MCU movie, Captain America - Civil War (reviewed by me here). Another great thing about it is the music...

Now, I’m gutted that Brian Tyler didn’t get a chance to work on this because I like how he’s slowly been bringing the musical elements of the Marvel cinematic universe into some kind of coherent style (something the company seriously needs) but now they’ve pulled in Michael Giacchino on scoring duties. Now I quite like Giacchino anyway (although I don’t like his opening, Marvel company fanfare as much as Tyler’s) and he turns in a really great score here. Definitely loved the sitars used in the end titles and it all works really well with the movie. Cant wait to get the CD of this one... it’ll be on for quite a few spins, I can tell you.

This movie has all the usual tie ups that the Marvel Cinematic Universe is known for and I’m sure Doctor Strange will be playing a special role in the proceedings in the third of The Avengers films. There’s a special artefact he always had in the comics, apart from the famous red cloak (blue in those original stories... if memory serves me... it didn’t change to red until later) and I’m sure anyone familiar with the artefact I’m talking about from the strips will realise exactly how this factors in with some of the last few years’ Marvel movies... so I won’t say anything more on that subject here because one of the characters, Wong, makes the connection quite implicit by the end of the film. So, basically, if you’re trying to watch all the specific Marvel movies which link into each other at the cinema... definitely don’t miss this one.

And, really, you don’t want to miss Doctor Strange anyway. It’s a terrific, fun movie and, although it injects a certain gravitas into some of the subject matter, it’s a welcome antidote to some of those solemn, darker super hero movies which have been doing the rounds at the cinema lately... juggling a dark, frightening tone with a light, frothy window dressing. Great stuff and easily the best of the superhero movies I’ve seen this year. Watch it while it’s hot!
Posted by NUTS4R2 at 19:18