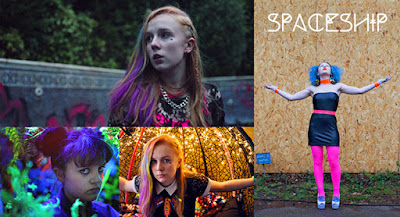 You know... sometimes a journey doesn’t take you from point A to point B. Sometimes you get to the end of the road and find that the journey itself was the destination after all. I think Alex Taylor’s Spaceship is a little like that. The narrative hints at an end point in the journey but, when you reach the end of the movie, you find that it’s not necessarily what it was all about in the first place.

Spaceship is the final of the five films I picked to see at this year’s London Film Festival and I have to say that, out of them all, this one was the most unusual and unconventional in its construction. It’s also a pretty rewarding film if you take the journey with the characters with the right kind of mindset to receive the sound and images although, I suspect, this one might well split audiences right down the middle.

The set up to the film is that Lucidia, played by Alexa Davies, is living with her father Gabriel, played by Antti Reini. Years ago, Lucidia’s mother went missing for a few days and then just turned up out of the blue... dead in the swimming pool with a smile on her face. Once, in the same town which also houses a military base, a whole group of teenagers went missing from school and returned a few days later claiming they had been abducted by aliens. It’s from this starting point that the film begins to look at Lucidia, Gabriel and a whole load of Lucidia’s teenage friends as each of them are followed by the cameraman who records, almost voyeuristically, their conversations about various topics not always pertinent to any central plot (although there are ripples).

This is one of those movies which is all about calling on the actors to improvise their scenes and the director himself, in a post screening talk, said that his modus operandi was to find interesting people to play the various characters and to let their personalities come to the fore. Which is not exactly a new idea but it does make for a refreshing cinematic experience and I might be right in saying that this ‘story’ is very much one which took shape in the editing room, for the most part, rather than from following any kind of script too closely (Eisenstein would approve). I would think it was subsequently honed down so specific narrative markers could be hit at this stage. At least, that’s my best guess.

When Lucidia disappears like her mother did (twice by my count, if you include her re-entry into the general narrative space for a second time at the end of the film), Gabriel obviously tries to find her and, as a result, hooks up with his daughters teenage friends, striking up a friendship of sorts with one of them, Tegan, played by Lara Peake. Tegan may or may not be a semi-reincarnation of his dead wife... at least in spirit. He also gets to meet Luke, played by Lucian Charles Collier and Alice, played by Tallulah Rose Haddon, who has her own goth slave and isn’t always the most responsible of this group of friends, to be honest.

The film makes use of fragmented and occasionally seemingly unrelated footage to weave a spell on the audience while at the same time backing off from any completely prescribed perception of events.
A quick look at the synopsis of the movie on the IMDB convinces me that either the person writing it hadn’t seen the movie or that they perceived it in a very different way from how I did. Which is okay... I just feel that the IMDB entry is a little misleading in this instance. The film is not about telling a story in a conventional sense and, rather, it tends to rub little studies of people’s personalities together and allows the audience to bring their own baggage to the proceedings, stimulating them to their own connections. Some films do this... they aren’t all that common but they are out there and this one makes use of this approach to the material very well.

From the sound of it in the Q & A after the screening, the director did his best to create an interesting and intimate atmosphere on set and, although the stock and styles of shooting various sequences sometimes come at you in a fairly ramshackle way... they never seem to quite rupture the underlying flow of the footage as it’s presented to the audience. The way the actors and actresses are allowed to perform for the camera, almost unfiltered in a way, makes for some very naturalistic, believable turns from the cast and it’s nice to have a director who will allow that to happen as much as it seems to here. At least on first watch. Of course, the skill is that he is able to control the ebb and flow of these vibrant characters in the editing room after the main shoot and turn the truth into art, in a way. So, yeah... truth at 24 frames per second, as it’s been said many times.

Everything is about audience perception of events when it comes to certain aspects of the ‘story’, if you want to call it that. There is a definite through line which links most of the groups of characters and the friction or energy created when these little pockets and moments of time come together reveal a much bigger and more fantastical picture of events in the film as a whole... depending on whether an audience member decides to accept these events at face value or not. It gets quite surreal in places, depending on the decision you make to either take things as they are stated or start to look for unmentioned alternative versions of the version of reality you are witnessing.

There’s one magical moment, for example, involving Steven Elder, who plays a squaddie who has... been away, somewhere, for a while... and who is looking for a boy who dances to disco in a cave. He reaches into his pocket and pulls out a poem which he recites to Lucidia at a moment during the last third of the movie. However, as he begins to read he... okay, I’m not spoiling this scene for you. What I will say is that it reminded me a lot of a kind of cinematic equivalent to what Michael Moorcock used to drop into certain passages in his early Jerry Cornelius novels. I think Moorcock used to use this technique I won’t name as a kind of literary Godardian distancing device... something to pop you out of the experience so you can then look at it closer. Which was my very first reaction when I heard Elder start reciting the poem but, as he goes on with his words, the scene becomes something more interesting and almost forces you to re-examine your own reaction to how you felt 10 or 15 seconds before, when he first starts reading. The director talked about this scene after the film had finished and he had obviously been worried about it... I think was very grateful for the way his actor managed to deliver the lines in the final movie.

And that’s about all I’ve got to say about Spaceship. This is not what you might think of as a ‘mainstream’ movie but it is very interesting and, although certain kinds of audiences may find it a little challenging, I think it’s worth approaching in a switch your brain off capacity and letting the art and little subtleties wash over you to get the best out of a first viewing. It’s a movie I may well come back to at some point, if there’s a Blu Ray release, partially because some of the colour palettes used are so sparkly & beautiful and partially because I suspect certain lines and incidents may make a lot more sense a second time around. If you’re into cinema then you should definitely take a look at this visually brilliant, opulently performed and ultimately haunting movie. There are too few of these kinds of films about, to be honest.