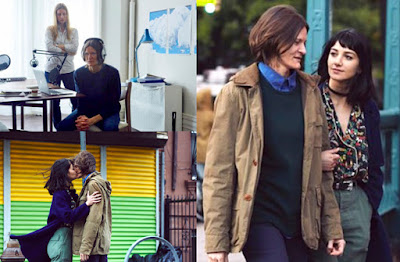 So the second of my movie choices for this year's London Film Festival was the black comedy Women Who Kill. Now the fact that it was a comedy must have somehow escaped me when I read the brief description of the movie in the LFF programme this year... otherwise I wouldn't have gone. I usually only respond well to comedies if they have Woody Allen or The Marx Brothers in them, truth be told. However, if the comedic tone was somehow underplayed a tad in the description, I'd have to say that was kind of a wrong move for fans of the genre because, frankly, not only is it a comedy... it's actually a very good one.

Describing it as a black comedy might be a little off though, it seems to me. Despite the tone of the scenes and the way the dialogue is delivered, it's actually quite a broad comedy and had the audience laughing out loud and almost rolling in the aisles. Not me, of course, because I rarely actually laugh or smile at comedy, but I was certainly enjoying and appreciating it as much as the next person.

The film focuses on Morgan, played by the writer and director of the movie, Ingrid Jungermann, who co-hosts a podcast she does with her ex, live-in girlfriend Jean, played by Ann Carr. The two women both research and host this podcast, Women Who Kill, which concentrates on some of their favourite female serial killers and goes into a lot of the detail which they’ve researched about their subject matter. In fact, they even go to various prisons to interview different serial killers for their show. The one they see in their latest edition is nicknamed, The Clipper, and played briefly, in two scenes, by Annette O' Toole. Everybody thinks that Morgan and Jean should get back together again properly but, at this moment in time, they are both kinda half resistant to the idea.

Played by Sheila Vand, the star vampire of the wonderful Iranian film A Girl Walks Home Alone At Night (which I reviewed here), this bright young thing comes from nowhere and enters the story, making a play for Morgan which the latter is more than ready to pursue. And so Morgan has a new relationship in her life with a woman who, she confesses, is a big fan of Morgan and Jean’s serial killer podcast. However, as the relationship plays out Morgan starts to feel a little more paranoid and vulnerable each day... refusing to ask her lover about her locked ‘mystery box’ until, when her suspicions get really aroused, she breaks into it one night and finds samples of different peoples fingernail clippings... which are labelled with the first names as the victims of... ‘The Clipper’. With a suspicious sudden death at the place where she and Simone work, Morgan is forced to ask herself if can this be The Clipper’s daughter and, if it is, is her life and the lives of her friends in danger?

Well you’ll have to go see to find out and I certainly urge you to. This has got a fantastic batch of actresses in the movie and the chemistry between them all is just wonderful. Jungermann’s script is tremendously funny and becomes a finely honed tool to extract laughter as the deadpan and somewhat understated delivery by Jungermann and Carr of some amazing one liners reach levels of high art in their performance.

Even situational comedy is great in this, such as the sudden unexpected announcement of the Sat Nav system in Morgan's car which is when you first realise that the main protagonists are going to interview someone in prison. Or a tremendous, actually somewhat suspenseful mini sequence where Morgan reaches for a weapon in the cutlery drawer of the kitchen when she believes Simone might be about to attempt to kill her... only to find later her hands had found a less than useful egg whisk for the situation. This is great stuff but the humour and extreme wit to be found in the, frankly, near perfect screenplay, also explores the tender and intricate sides of the central relationships, giving valuable insight into these characters and also a little look at the bigger picture in how these kinds of cutting observations apply to humanity’s collected experience. At least, that’s what I got from it.

There also seems to be a strong subtext dealing with the way a person’s interests and obsessions can also intrude into the smooth running of their life and how it can affect all of that person's relationships like the ripples from a stone being dropped into a body of water. Is Morgan bringing about her own problems and leading herself on in an example of self fulfilling prophecy or is there really much more to Simone than may at first meet the eye? The excellent but highly comical approach to the scoring tells us to disregard our own ideas about Simone but, is it leading us down the garden path, so to speak? And no, I don’t know who did the wonderfully light score to this movie, which seems somehow typical in terms of music for American independent movies, because the IMDB is no help here whatsoever, as it turns out.

What I will say is that the end of the movie is pretty bleak but not necessarily for the reasons you might expect. In some ways it reminded me of the original ending of Kevin Smith's Clerks. If you've ever seen that alternate ending you'll know it gets uncompromisingly dark in the films final minute. Women Who Kill also explores depressingly darker territory in the film's final minutes and, though I don't want to give anything away, I will say that the ending might haunt you unexpectedly after you've seen it and start forcing you to question your perceptions of what you have spent the last hour and a half of your time watching. You won't necessarily be able to find a consistent solution and I suspect the last few minutes might not sit well with some audiences, but it's a pretty interesting finish to the film and I find those kind of 'almost inconclusive' conclusions are often the best, at times.

So there you have it. If you're a fan of US indie cinema and you actually get the opportunity to see Women Who Kill on release sometime, definitely take a chance on it. The dialogue is scintillating and the static nature of some of the camera set ups goes hand in hand with the understated, but hilariously funny, performances... letting them breathe so they can worm their way into your imagination. A truly cool film, this one, and worth some of your time.