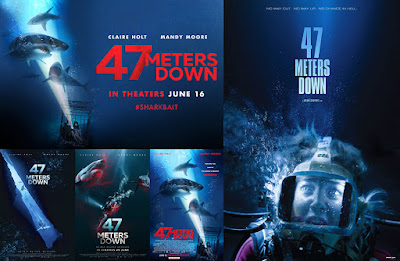 Warning: Here be spoilers...
but I will warn you again before I get there.

There came a point around about halfway through Johannes Roberts' new shark bait movie, 47 Metres Down, when I realised I was sat in a dark room spending an awful lot of time watching dark water, floating bubbles and not much else. I chose to see this on a weekend where I just had to see the almost perfect movie Wonder Woman for a fifth showing (and counting... my initial review is here)... so that just left me one slot with a choice of two films which, quite frankly, seemed like a slow cinema weekend. It was either yet another teen killing, spooky haunted something or other presentation (which I may yet still manage to catch) or it was a shark movie. Since there haven't been that many shark movies in cinemas in recent years I opted for the latter but, in hindsight, that may not have been the wisest choice.

The film though, I'm happy to say, is certainly not populated by the vacuous, over-teened characters that the trailer makes out. Although my concerns over whether to two leading ladies were destined to be shark fodder or not was hard to judge, they at least weren't the kind of bratty, empty headed young party goers you maybe might have been expecting from something like this, I'm pleased to say. They weren't exactly greatly drawn characters either, for sure and the usual 'move fast, ask questions after the movie' Hollywood style short hand does still apply here but, at least I could imagine hanging out at a bar with the two main leads, played by Mandy Moore and Claire Holt, without making my excuses and leaving early. So that was okay. And as for the rest of the characters in the movie... barely traced outlines of shades of people, even in the case of the one 'star name' in the movie -  Mathew Modine as Captain Taylor - who spends most of the film as a disembodied but authoritative voice on a headset radio.

The plot set up is two sisters, one just coming out of a relationship break up, who go on holiday and end up meeting two guys who persuade them to do the latest, semi-legal tourist activity, being lowered in a human cage a few metres down at sea to look at the passing sharks. At this point, though, I was pretty much in the camp of... anyone who would put themselves in that kind of semi-risky situation in the first place deserves to be eaten.

So, yeah, the inevitable happens and the dodgy bit of string holding the cage in the water breaks. The girls and cage go tumbling down to the bottom of the ocean floor (or at least a ledge in his case) with only 30 to 50 minutes of air left in their tanks and with various obstacles other than just the man eating (and in this case I guess I should call them woman eating) sharks which are making periodic drive bys to see if their packed lunch has come out of the wrapper yet.

It's not the most boring of films and the director keeps things lively but, it's not the most intense either and it wasn't long until I came to that point which I mentioned earlier where everything was just dark (clearly shot in a tank) water and fizzy bubbles. In fact, the teal tension and unease in the movie, and it's not without those specific elements either, come from Tomandandy's score. Like the recent movie Dunkirk (reviewed here) the music is pretty much everything in adding a layer of menace to the proceedings and the scoring is, at the very least, a well functioning water beast that plays its part maybe more than it might honestly be expected to, truth be told. Apart, that is, from the terrible songs in the early parts of the film, both diegetic and non-diegetic, which almost made me want to swim to the nearest exit.


Spoiler Warning. Miss out the next
paragraph if you don't want to know.

Perhaps the most inspired part of the movie is the fake ending but, alas, the introduction to this sequence much earlier in the movie is clumsily handled in that it's badly telegraphed to the audience. There's a point where the good captain drops a couple of oxygen tanks for the girls and we hear his warning to the particular lady who has swum in range of his signal, that the reason he didn't drop them before is because there's a possibility the overuse of these may give them oxygen psychosis hallucinations. Now, come on, there's no way that would have been written into the script unless the writers were going to use it as a feature of the film later on in the 'story' and, sure enough, as I watched the girls float to their rescuers and get back on board the ship, albeit with some nasty but implausibly gentle (for a shark) wounds... I was thinking, yeah this isn't real... and it isn't. There's a nice effect with some blood on the hand wound of one of the leading ladies and it’s beautifully done as a reveal that half merges the hallucination she is having in her head with the reality of her situation (which is vaguely reminiscent of the ending of the original British cinema and home video cut of The Descent) but, like I said, you kind of know it’s coming so... nice idea but failed to make much of an impact on me, I’m sorry to say.


So there you have it.

According to the IMDB there seems to be a whole slew of technical inaccuracies, some of which, from what I could make out, would stop the possibility of the way this story might play out in real life in it’s tracks. I was interested in the fact also, that at the depth the main protagonists are in here, there is no light to give certain things the colours we know them as... so the blood should apparently look green to the human eye at this depth. I wouldn’t have known that unless I’d read it though because, clearly, the blood in this film is pretty red. This includes a ‘close but no cigar’ opening sequence where one of the leading actresses spills her red cocktail into the swimming pool beneath her as a not so subtle visual metaphor for what we are going to see later on. It doesn’t really work all that successfully as a moment of tension, however (which is what I suspect the director was going for there), because once you realise the girls are in a swimming pool, you know there’s no possibility of a shark attack happening at this moment.

And that’s about all I can say about this one. 47 Metres Down is a nice idea but it’s a limited one and the exploration of those story limits throughout the fairly short running time doesn’t serve to help put any real bite in the picture. It’s maybe a little better, or at least more credible, than the shark movie I reviewed last year, The Shallows (reviewed here) but ultimately I left the cinema a bit disappointed with it, I have to say. I’ve not seen any movies which truly measure up to the king of all shark movies, Steven Spielberg’s Jaws and, in all honesty, this one comes nowhere near that in terms of quality and entertainment, as far as I’m concerned. Not the big fish I was hoping it might turn out to be.
Posted by NUTS4R2 at 17:26