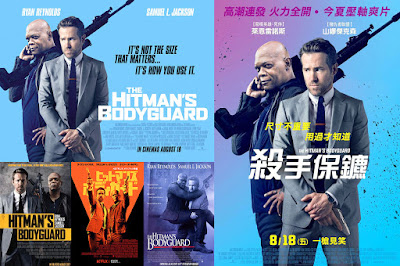 Witness For The Execution

Warning: Very mild spoiler for something
you find out very early on in the movie.

The Hitman’s Bodyguard stars Ryan Reynolds and Samuel L.  Jackson and is one of those sub genres of the action comedy film which comes under ‘hesitant buddies’ movie. We’ve seen them all before, of course, and there are good and bad examples of this dotted around cinema history, especially over the last 50 years, with some truly great ones being Freebie And The Bean, the first Lethal Weapon and The Long Kiss Goodnight (which also stars Jackson, this time teaming up with Geena Davis). They’re films which involve two things in their ingredients done especially right if they are to be truly worth any repeat viewing and, in terms of what I think those elements are, this film definitely has one and... well it almost has the other. This is above and beyond all the normal , obvious things that this genre needs to get right, of course, such as good action and a good sense of pacing.

Let’s get to the onscreen chemistry between the lead characters first. Reynolds and Jackson have it in spades. They’re both actors, actually, that I have a lot of time for. I’ve been watching Sam Jackson for a while but first became aware of him properly in Stephen Spielberg’s Jurassic Park (reviewed here). He’s an actor I appreciate a lot and, I guess in some ways he’s something of a living legend. Ryan Reynolds I don’t know so well but I liked what he did in Deadpool (reviewed here) and I also loved what he did in Green Lantern (reviewed here) which I think was a, sadly, underappreciated gem of a movie that I suspect might do well over time and become better appreciated in 20 to 30 years than it is right now. He’s also an actor I have a lot of time for. So there’s that and... yup. Like I said, I can confirm the chemistry between the two male leads in this is really very good. They play off each other amazingly well with Jackson reflecting a joyous, life loving assassin who makes a deal to testify against the movie’s prime villain in order to get his wife, played by the always brilliant Salma Hayek, out of jail. Reynolds is the deadpan genius of a straight man for a lot of the show and, together, they really work well.

The film starts off strongly where we see the end of Reynold’s last case as ‘Triple A rated’ bodyguard Michael Bryce, with everything suddenly going wrong before his eyes. Cut to two years later and he is a washed up, down on his luck shadow of his previous self but, still doing a similar job for another firm. We see him pick up a drug addled Richard E. Grant and get him to safety and it is only when we hear him talking to his co-worker on the phone that we realise what this relatively easy looking job entailed... as we see him take out at least a half a dozen bad guys in flashback on his way to pick up his client. One wonders why someone who is so proficient at taking out the opposition is still in the position he’s in but, there you go, that’s who this guy is. We then meet Gary Oldman as dictator Vladislav Dukhovich, who is on trial from crimes against humanity but, somehow, not one shred of evidence has been found against him that will stick. We meet him a little earlier in a scene which is pretty standard fare to make his villainy personal to the audience, as he does something pretty nasty to one of his victims. We then meet the incarcerated Darius Kincaid, played by Jackson, who makes that deal for his wife’s freedom with the British to show up and testify at Vladislav’s trial... if they can get him there alive. Of course, as soon as they try to transport him it’s predictably bedlam but Bryce’s ex girlfriend, Agent Amelia Roussel played by Elodie Yung (who I liked so much in Gods Of Egypt... reviewed here) gets him to a temporary safe house and calls in Bryce to help out. Of course, the two recognise each other immediately because Darius has tried to kill Bryce 38* times in their working life so, after the inevitable fight, things settle down and we are left with Bryce and Darius ‘on the road’ and trying to get to the court in Amsterdam from London (most of the first half of the film is set in the UK) while avoiding the opposition and trying to outwit the traitorous plant within the British secret service who is working for Vladislav and trying to make sure Darius never gets to that trial.

And that’s the set up and, like I said before, the chemistry between the two male leads is pretty good... so that’s all fine. And, yes, the film is pretty pacey and has a lot of good and sometimes quite violent action set pieces. That being said, I did have a few problems with it and... I’ll get to those now.

The other essential element you need, I believe, for this specific sub-genre of film to work, is a very good script. The structure in this is relatively sound... a bit clichéd but I’ve got no issues with that. However, the dialogue is really not that great in a lot of places. Don’t get me wrong, there’s some excellent stuff in here including some poignant bonding between the two leads (as you would expect from this kind of film) and some very funny moments. Ultimately, though, I just felt something was maybe missing for some of the time. The dialogue didn’t always feel like it was making the most out of the situations which we're presented with on the screen at certain points but, on the other hand, it’s still not terrible so I’m really not complaining too bitterly. I did, however, feel that this element never allowed the film to rise to being a truly ‘great’ movie and, instead, it kinda hovers at the ‘really quite nice’ level for a lot of the time, instead. No worries, though... that’s a lot better than most movies out there these days.

Another thing I found was that the action sequences completely failed to exploit the great rapport between Reynolds and Jackson by having a lot of it take place at the same time but with them in separate locations. There seem to be surprisingly few scenes of this nature involving the two of them on screen at the same time. Instead, Reynolds will do his thing in a completely different area while Jackson is doing something similarly violent somewhere else. Take the excellent speedboat chase in Amsterdam, for example. Jackson is on the boat and escaping the villains while Reynolds is on a bike protecting him from afar and having his own battles. Similarly, a car chase with Jackson which is fairly long takes place while Reynolds is involved in a foot chase and gets down with some violent shenanigans in a kitchen. How the two miraculously meet up again after this sequence does raise the eyebrows, it has to be said and certainly stretches ones ability to suspend disbelief. Maybe there were some scenes cut which explained how Jackson can just happen to backtrack the long distance he drove and somehow go to the exact place where Reynolds is having a fight but, you know, it wasn’t evident in this final release print.

These are, however, fairly mild problems and, for the most part, the film is an entertaining and joyful experience. I was surprised to find that I liked the score, considering this genre often has some dire music in it. This one is by composer Atli Örvarsson, who also did the wonderful “baroque n’ roll” score for Hansel And Gretel Witch Hunters (reviewed by me here) among others. It’s a really good fit to the movie and mixed in loud enough that I could appreciate it properly in context... I’m also delighted to find that there’s some kind of CD release for this so, you know, that one goes on the list (although half of it seems to be ‘pop songs’ so now I’m having second thoughts about bothering to purchase this).

So there you have it. The Hitman’s Bodyguard is not the best of this kind of movie that I’ve seen but it’s still a pretty okay one and certainly something I’d like to see a sequel to (The Bodyguard’s Hitman, maybe?). Entertaining enough with great performances, some great action and, importantly, editing that doesn’t lose you in the middle and leave you behind during those stunt sequences. A good night out at the cinema and something you might enjoy if the buddy action comedy genre is your kind of thing.

*I’ve only just realised while writing this review, that the dialogue in that scene
going from 37 to 38 is a little homage to Kevin Smith’s Clerks. A nice touch.
Posted by NUTS4R2 at 13:16