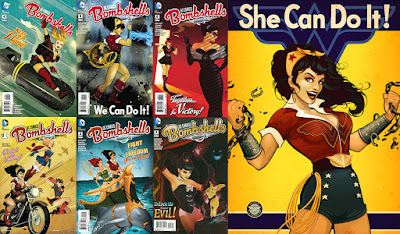 It’s been many years since I read a superhero comic and longer than that since I read one where multiple super powered beings banded together to fight a common foe. When I first started buying the DC Bombshells merchandise a few years ago, in the form of a few travel pass holders and a deck of cards, I had no idea it was an actual comic book. As it transpires, though... it wasn’t. First manifesting itself as a series of popular prints and then progressing to statuettes of female superheroes re-imagined as 1940s examples of themselves (which almost makes no sense in terms of Wonder Woman) or, in some cases, popular male heroes re-imagined as women from that same era, this is a case of original artist Ant Lucia’s designs inspiring a retro fitted comic book series which faithfully works these creations into a 1940s wartime setting.

This first volume, with the subtitle, Enlisted, reprints the first six issues of this series. The various issues which make up this trade paperback reprint gives us some of the back story to these characters as it slowly reveals how they come to be thrown into this mess of a Second World War together and are recruited to form part of ‘The Bombshells’… a kind of US government headed, all female version of the Justice Society of America, if you will (not to be confused with the Justice League Of America, who were the Silver Age equivalent of that particular super-group).

The story starts off strong when the feminist subtext which shapes the central storyline kicks in and completely nullifies one of DC’s biggest hero characters. Instead of Bruce Wayne’s parents being shot in the street after they and young Bruce emerge from a movie theatre showing a Zorro flick, they are saved from those fatal bullets by the appearance of Batwoman, a masked vigilante who  presumably takes her name from the baseball bat she swings to brutally beat her evil foes. Thus Batman is never born in this version of the DC universe (at least not yet in these issues, anyway) and this strong, opening statement really is an overt sucker punch to those expecting some kind of Dark Knight storyline to this thing.

There are also some much more contemporary DC characters thrown back in time… ones who I am not all that familiar with in some cases…  such as Harley Quinn and Poison Ivy. They even manage to shoehorn some nice appearances from male characters in this one too… such as a couple of surprise panels of Swamp Thing raining down destruction on some soviet soldiers and Zatanna’s magic hat rabbit actually being a rodent version of John Constantine (who was played by Keanu Reeves in a terribly unfaithful but ultimately very fun movie version of that character).

The story is beautifully told and takes a fair few more twists and turns than you might reasonably expect from the material as it assembles its interesting cast. I say interesting because some characters such as Wonder Woman are already 1940s heroines to begin with and, although Diana’s origins are more or less what they always were, the story goes further with some characters in terms of its initial set up. Supergirl, for example, was rocketed to Earth and found in the Soviet Union, where she grows up with her half sister Starwoman before events take a more complicated turn.

There is some beautiful art and panel design over various sections of the comic which give it a nicely hotch potch feel in places. For instance, there’s an interesting splash panel introducing Moscow, September 1940 where the text boxes read down the panel but also take you across before going left on two of three vertical boxes which are housed within that main panel. So you read down and the third insert picture box is on the right of the panel which accompanies that text before you continue down where the text is illustrated back to the left on the second vertical insert box… which you have already, presumably, looked at as you are working your way through the text on the way to the right. Because the insert picture boxes are vertical and long, this doesn't actually spoil the flow of information as you might expect it to and it’s a pretty nice feat of visual narrative flow maintaining the sense of the story in as interesting a manner possible without popping you out of that story with its own cleverness. Although, it has to be said, there are some other, somewhat less successful spreads throughout the issues where the reading direction is less clear and I found myself reading down the left page with things not making a lot of sense before realising these pages were meant to be read across a landscape spread rather than going down… something which used to be considered a bit of a design flaw in the way comic panels are constructed (if the panels didn't automatically lead the eye so the reader didn't know where to look next) but… I dunno… maybe I’m just getting too old.

That aside, though, there are also some nice moments where different kinds of art styles are used to reflect the different tones in which the story is told. For instance, when Kara (Supergirl) tells her origin story, the art and colouring flattens more and it is presented  almost as a storybook fable in that simpler, less embellished lines are used and a texture is run into the background, underlying everything depicted in those pages and giving it an almost illustrated fairytale look… which was a nice touch, I thought.

The story itself isn’t simple, though… weaving in and out where characters start off as one kind of person before they end up as someone/thing completely different. There are hints of this even in the first six issues reprinted here and one of the problems of printing trade paperback collections (often confused with graphic novels by many film companies, for some strange reason) is that their continuous nature leaves the reader of such collections without a natural conclusion to the events which are put in motion at the beginning of what are, in the case of this one, looking to be fairly complex story arcs.

That being said, the six issues collected here do lead to a kind of natural “mini conclusion” of sorts and they could be viewed as… almost standalone. Although, to be honest, I get the strong feeling that the writers haven’t finished introducing the full cast of these comics by this point in.

In the old days, when I was reading such things more regularly, DC Bombshells would have been branded an Elseworlds story… which was the DC equivalent of the Marvel comics What If…? universe. Alas, the Elseworlds branding is nowhere in sight on this collection so I guess the concept of the comic might be a somewhat confusing prospect to people who might not know that this is not part of the regular DC canon and are trying to square this with the characters as they might remember them from years gone by or, for that matter, as recently depicted in various movie versions. However, I would certainly recommend this both to fans of comic books and also to those who are less inclined to normally pick up this sort of visual confection. It’s a nice idea inspired by some really cool artwork and it’s clearly taking that jumping on point seriously and not throwing those ideas away for a quick cash in. I’ll certainly be aiming to pick up the remaining volumes at some point.
Posted by NUTS4R2 at 19:07