Blood From The Mummy's Tomb 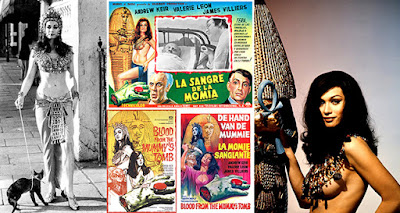 Warning: Spoilers towards the end.

Blood From The Mummy’s Tomb is one of my top six favourite Hammer movies and, as such, I was pleased to find that a new restoration for Blu Ray release was being premiered at this year’s FrightFest. Although it is one of my favourites, it must have been at least a decade since I last watched it and I found, on rewatching this now, that I’d forgotten quite a few things about the film since I’d last seen it. I also found I’d got it mixed up in my head with Bram Stoker’s original story, The Jewel Of Seven Stars, on which this film (along with a few other movies) is based.

The film stars the absolutely wonderful Valerie Leon in a dual role as Amanda and the ‘mummy’ of the title, Tera. While this isn’t the first movie to depict a female mummy (I’m sure that, at the very least, Santo or some other Mexican character probably got to it first and there was also a TV adaptation of this Stoker story which aired just before this was released), it’s still a pretty rare phenomenom in film and you can kind of see the influence of this and how it possibly paved the way for such modern female Mummys as Patricia Velasquez in The Mummy Returns and Sofia Boutella in the latest Tom Cruise vehicle, The Mummy (reviewed here).

Miss Leon is just amazing here in a role which is perhaps a little less talky than you would expect but, then again, there are a lot of stretches in this movie which are done without dialogue and the film is, arguably, better for it. Her mere presence tends to dominate every scene she’s in so I’m surprised we didn’t see a lot more of her in similar roles over the years. It’s an interesting character in that one never quite knows, as the film progresses, if Amanda is the main protagonist or antagonist as the grip of Tera’s legacy takes a hold of her mind at various moments.

In this, the character is joined boy her ‘boyfriend straight out of the sixties... luv’, played by Mark Edwards. In a bizarre twist, as in-jokes go, the character he plays is named Tod Browning, after the director of the US version of the 1931 Dracula (and strangely not after the director of the 1932 film The Mummy, which would maybe have made a little more sense). The film has a few sly little references, actually, such as a To Let sign on a house being named after Hammer’s own Christopher Neame and Roy Skeggs.

Although the plot is fairly close to Stoker’s original novel (or perhaps novella?), it’s a little bit of a departure in terms of where the narrative direction goes... it’s anything but formulaic... and this helps mark it out as being from a particular period in Hammer’s cinematic history when they were being a bit more experimental (perhaps that’s why it’s one of my favourites). That being said, the film does have a ‘Mummy’s curse’... or perhaps legacy would be a better word in this case... as Amanda was born as her mother died, at the exact time her father discovered and opened the tomb in Egypt which housed Tera (as in the original story, if memory recalls). She is destined to become Tera reborn if certain elements, years later, are brought together when the Seven Stars align in the right way on a certain date. Of course, the party who discovered the tomb have all split up in later years and each have one of these essential artefacts in their ownership. However, by the power of Tera’s severed hand, the artefacts are slowly brought together as the ‘body count’ element of the film gets underway. As the distinguished Kim Newman said in his introduction to the screening, there’s a heck of a lot of throat ripping in this movie and, for some reason, people seem to have their throats torn out by a magical, invisible enemy and not directly by the creeping severed hand which is rendered, as it is in every other film featuring a creeping severed hand, in a way which in no way detracts from the comedic element of having... well... a creeping severed hand (wow... I managed to work that phrase three times into the same sentence and am still not bored with typing it... I’ll see if I can return to it at some point).

The film has a troubled production history... Peter Cushing started filming in this one as Amanda’s father, Professor Julian Fuchs, but his wife died very early on in the filming and he left to be replaced by the always excellent Andrew Keir, who had previously played iconic character Professor Bernard Quatermass in Hammer’s own excellent remake of Quatermass And The Pit (reviewed here) four years before... a role he would return to decades later on the radio. As if that was not bad enough, director Seth Holt, whom Mr. Newman told us tended to know exactly how his movies would slot together in his head, died half way through production and Michael Carreras took over to carry on shooting and editing. Alas, Holt never told anybody how the film would slot together in the editing room and so, despite having a script, there are probably some differences in the way it was put together as opposed to what it was supposed to look like. Perhaps this jigsaw puzzle of an exercise explains why Miss Leon’s night gown seems to inexplicably change colour in a scene following on from another... maybe the footage was supposed to be taking place on another night rather than as seen here (did anyone else notice that or is my mind playing tricks on me?). Indeed, some scenes like the death of a character in his car are pieced together in a truly abstract manner and make it something of an expressionist piece, although I suspect the original intent may have been quite different. It’s a neat solution if not all the footage was available to be put together (perhaps a creeping severed hand absconded with the film stock)... never mind the fact that a pair of characters react instantly to the death, even though at least one of them couldn’t have known about it yet. Again, possibly an editing mistake or even, as is such the case with a lot of questionable moments in modern movies, an editing decision.

Everyone is, of course, marvellous in this picture, which has a whole host of familiar British character actors (although, alas, not Hammer regular Michael Ripper, as this was the only Hammer Mummy movie not to feature him). We also have a more sinister... ‘almost but not quite but maybe he is depending on a certain point of view’... villain of a character played absolutely brilliantly by James Villiers, who some might remember best as the lead villain in the second of Richard Johnson’s Bullldog Drummond movies, Some Girls Do.

In addition to the sterling cast, though, we have a tremendously loose atmosphere which, admittedly, doesn’t do much for the pacing but certainly gives the film a very strange vibe to it and which I truly think does the movie a lot of good. There’s some wonderful shot compositions using vertical shapes in one sequence and some truly amazing camerawork in a scene where the camera just pans around speedily at weird Dutch angles in an insane asylum as the laughter and wails of the patients play on the soundtrack to a fairly disconcerting effect. Add to this the great Tristram Cary’s not so subtle but extremely striking score to the film and you have a sure fire winner. Add in Tera’s amazingly ornate costume which, as Kim Newman pointed out... nobody in the world could have worn as well as Valerie Leon... and you have a minor but no less potent piece of iconic Hammer Horror imagery added into the mix too.

One thing about the Hammer films of this specific period which always got me was their unbelievably bleak endings. In the original TV serial of Quatermass And The Pit, for example, things are all wrapped up happily by the good Professor when he delivers a speech telling people what just happened and why everything is going to be fine for a while, if I’m remembering correctly. The Hammer film version eschews that ending and just concentrates on a spent Professor Quatermass and his female companion as they look on silently recovering from the destruction caused in the last twenty or so minutes of the film. It’s far bleaker and Hammer had a phase where all their films were ending with this kind of pessimistic atmosphere and this one is no exception. Bram Stoker revised his original story years later to give it a far more optimistic and upbeat ending to what it had in his original text but the Hammer film has a much more ambiguous ending. It has been noted that this is the first time Hammer had filmed a Mummy movie where the Mummy wasn’t swathed in bandages and that’s quite correct except... in the ending that claim possibly comes into question. As the Professor’s house falls in on him and kills two of the characters, including the Professor, we have a little scene where one of the characters has survived and is wrapped in bandages for her wounds in a hospital. It’s Valerie Leon again, her eyes are quite distinctive (as they need to be here) but, the film leaves us with the question as to which version of Valerie Leon it is... Amanda or Tera. Actually, if you listen to one of the nurses mention her state of undress when she was brought in, I would have to conclude that it’s definitely Tera who survives the movie to live and rip throats another day but I guess the case could be argued either way. Whatever the answer is, the camera freezes on her open eyes peaking from behind the bandages to give us another grim ending to a Hammer Horror.

Blood From The Mummy's Tomb has been nicely restored here and if you’ve never seen it before then this is probably the best version to catch... since they seem to have sorted out their ‘day for night’ photography shenanigans from the previous release of the film. So it’s good news that this latest version will be out as a new Blu Ray/DVD later in the year, then. Certainly a nice thing for those Hammer enthusiasts out there to add to their Christmas list, no doubt. I know I’ll be after this one, for sure. Now if they could just do the same kind of Blu Ray corrections for Dracula AD 1972 and The Satanic Rites of Dracula, I’d be even happier.
Posted by NUTS4R2 at 19:31