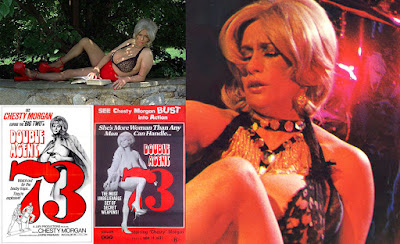 A Boob To A Kill

After the deadly disappointment of Doris Wishman’s first Chesty Morgan movie Deadly Weapons (reviewed by me here) I wasn’t in too much of a hurry to get back to the Chesty Morgan’s Bosom Buddies Blu Ray that I purchased last year. However, now that I’ve seen this second entry in the director and actress’ collaborative CV, I have to say that Double Agent 73 was a heck of a lot better than I was expecting and way more watchable than the previous film. That is to say, that first movie wasn’t even good in a ‘so bad it’s good’ way whereas... Double Agent 73 is absolutely quite bad in the most entertaining way.

The film starts off with Chesty stripping off during the credits and the clicking of her camera breast each time she squeezes said appendage brings up a new title card full of names. Wait... did I say ‘camera breast’? Oh yes... I’ll get to that in a minute.

The film starts properly when we are shown two villains playing cards in a private residence. We know the two are bad guys because one of them has a red blotch down the side of his face and is accompanied by a fiercely sinister musical stinger which, according to the music credit on the movie, is the work of Cine Top... who I can only assume is a needle drop library providing music by the yard. We are also shown a ‘spy’ going through the house and the movie nicely dates itself in this scene by having an old time photo-cube in a shot.

The spy guy finds some sinister looking film in a drawer. He steals it but, as he tries to make his getaway, he is spotted and caught by our two card playing fiends. The two villains consult their villanous boss, Mr. Toppler, with the spy in question and we know his identity must be important to the slow unravelling of the film because we only ever see Toppler in silhouette at this point in the proceedings. So by now your bad movie senses should be kicking in and telling you that the mystery of who this guy is should be pretty easy to solve from fairly early on in the movie and... yep, so it is.

Anyway, Toppler tells his bad boys to get rid of the spy so they take him down the street and run him over. They do a bad job of it too because they leave him alive long enough to tell a passer by in the street something before he finally shuffles off this mortal coil...

Cut to Chesty Morgan’s character Jane Genet (Agent 73) as she watches a group of men and women playing naked volleyball and sunbathes while reading her newspaper in her black, lacy underwear. Actually, it looks like the volleyball game is spliced in footage from another completely different movie because, even as she’s ‘paged’ and called away, she doesn’t once interact with the footage we’ve been shown of the game as an establishing shot and I can only assume this stuff is culled from one of the director’s earlier nudist movies and then just spliced in to give the illusion of having a budget. So then Chesty, who is a secret agent (it transpires), flies back to wherever she works and is called in to get a new mission briefing regarding a truly fuzzy plot to do with... drugs, I think... I honestly couldn’t say and I was really trying hard to find some sense in the plot here but, it all involves the mysterious Toppler in some capacity. This scene is really hard to watch, actually, because it involves a lot of cutting between a classic conversation set up with each shot involving either Chesty or her boss ‘face on’ as the main subject of the shot with the back of the other’s head in the corner.... which is a pretty basic thing you wouldn’t think you could screw up except each of the character’s faces seem to be in much less focus than the back of the other person’s head each time the shot changes. You’d think with the lady in question playing the main lead, they’d at least be able to get their ‘rack focusing’ done right.

Actually, I don’t like her boss in this picture. For starters he gives her a dumb assignment which involves finding leads, taking pictures of any clues and then eliminating the people she finds with the mysterious ‘clues’ and recording their picture so the people back at base can see who she’s taking care of. Also, he uses phrases like “This is extremely imperative, Jane.” Seriously? What kind of messed up grammar is that? That’s as redundant and awful as trying to say something is ‘very excellent’... don’t worry though, I won’t be trying to say that about this movie.

So anyway, the way Jane is supposed to take pictures is through an XL camera which her boss has implanted in her left breast, activating it with the whirr and click of the shutter by giving it a good squeeze. Which is, like, probably one of the most impractical secret agent, super spy gadgets in the history of film, maybe? So every time she wants to take a photograph she has to go topless and squeeze herself in the right direction. No information is given as to how she is supposed to focus or frame a shot... it’s just get her breast out and ‘smile for the mamera’. Makes no sense.

What also makes no sense is the nurse who assists with the surgery trying to kill off Chesty when she’s still groggy from the operation. No problem though. Chesty’s Jane is a smart cat and she dispatches the nurse by strangling her with a phone cord... and then plays with her breasts so she can take some pictures of her, naturally. Hmmm... it’s almost like this is just a ruse so the lead actress can keep getting her bosoms out for the audience, you know?

Okay, so this is a terrible movie but, like I said, it’s pretty enjoyable in places and I really wish I’d have been watching this one with an audience. Pretty soon we are into real ‘budget film-making’ when Chesty and an informant are speaking in a night club. Except... just like the nudist volleyball scene, the footage of the party with all the people doesn’t in any way match Chesty and a guy standing alone against a wall in what looks like it’s supposed to be in the same room as the party. Once more, none of the party footage is on the screen at the same time that Chesty and her companion are in shot but, the really brilliant thing Wishman does here... and it’s quite cheeky... is to cover the wall in bacofoil, shine some ‘Bava-tastic’ red and green lights on it and wobble it about a bit. For literally half a second you think you are watching a load of people dancing behind Chesty... until you realise that, no, ambient atmosphere or not, it’s just a piece of shiny foil being woggled about for a bit. It’s genius, it looks totally rubbish and... I love it. Nice attempt at a solution to having no money there. This brought a smile to my face.

There’s lots of more absurdly stupid things happening in this movie. Such as when a naked Chesty wards off a guy by knocking him down a couple of times in a fist fight... well, I say a fistfight but Chesty actually uses her breasts of doom, throwing them about like a pair of fists and doing some damage which, while it sounds completely stupid (and it is completely stupid, I assure you), actually looks kind of credible because the director slows the footage down so it looks like there really is some weight behind the main star of the show’s natural, sizeable assets.

Later on she lets herself get caught so she can take out a guy with her exploding lipstick. Meanwhile, a man stabs a girl who he mistakes for Chesty in a shower in a quite grisly, gory yet entirely unconvincing murder scene. When a guy comes after Chesty she squirts some gas from a smoking hooka thingamajig and then kills her immobile victim by filling his throat with ice cubes... which I guess is kinda inventive for a Doris Wishman film, I would say. Another spectacular kill comes when she somehow, through the magic of non-matching camera footage, manages to throw her earring across the room... right into the neck of her potential assailant. And of course, all through the movie, each time she takes out another bad guy or gal, she has to get her breasts out and take some photographs of them.

I’m not going to reveal anymore of the story here but, it has to be said, it’s totally silly... as is the ending and the revelation that Chesty is in danger because the spy camera has a hidden time bomb in it which will go off if she doesn’t report back to base in time. Why? Why the heck would you send out a trusted agent with a bomb in her bosom? This really begs the question as to why her boss, who presumably authorised this, would be working in an ‘intelligence’ agency. Oh well... I guess you can only be as intelligent as your script.

And that’s about all I’ve got to say about this one other than to reiterate that, of the two Chesty movies I’ve seen, this one is definitely the more fun and also, although she’s not great in it, she’s certainly a hell of a lot more credible and interesting in Double Agent 73 than she was in Deadly Weapons. I’d have liked to have seen her in a few more things after this, as I reckon she had the potential to become something more if given the right opportunities but, alas, her career only went on to include a deleted scene pulled from a Fellini movie and an unconfirmed appearance in a 1980s film. Which is a shame.

Still, I enjoyed this one and if you’re still on the fence about picking up the US Zone 1 Blu Ray Chesty Morgan’s Bosom Buddies, all I can say is, for me at least, this one was worth the price of admission, purely as a celebration of stupidity. Recommended for a room full of guys and gals who are heavily ‘alcoholed up’ and if you don’t mind people shouting at the screen in response to the ridiculous antics of the characters who inhabit this strange, alternative and amply cleavaged version of the cold war warriors of the US of A. Great stuff.
Posted by NUTS4R2 at 17:48